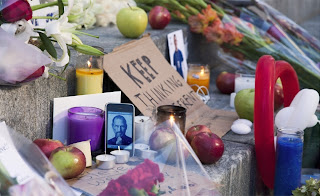 First came the social media. By 8 p.m. EST last Wednesday, the evening the co-founder of Apple lost his battle with pancreatic cancer at age 56, Steve Jobs was mentioned in 17.3% of all Tweets.

Then came the flowers, photos and, of course, apples left outside Apple Stores across the nation. Outside the Fifth Avenue store south of Central Park, an artist spray-painted the words “iLove Steve.” Even the protesters on Wall Street paused for a moment.

“America lost a genius who will be remembered with Edison and Einstein,” said Mayor Michael Bloomberg.

Magazines from Bloomberg Businessweek to Time to People were soon featuring his face on their covers, while investors speculated on the company's future—and the staying power of its $375-a-share stock price last week—in the absence of its charismatic leader.

But the Apple co-founder's legacy won't be forgotten anytime soon. The release date for Walter Isaacson's authorized biography of Mr. Jobs was pushed up a month, to Oct. 24, and his death came less than a week after Apple unveiled the latest version of the iPhone. Mr. Jobs also leaves behind Apple University, a corporate-training program he created to help executives, in Apple speak, “think different.”
----------
http://www.crainsnewyork.com/article/20111009/SUB/310099965
Posted by pratanacoffeetalk at 6:29 PM