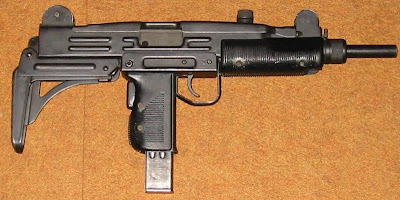 The Uzi (Hebrew: עוזי‎, officially cased as UZI) is a related family of open bolt, blowback-operated submachine guns. Smaller variants are considered to be machine pistols. The Uzi was one of the first weapons to use a telescoping bolt design which allows for the magazine to be housed in the pistol grip for a shorter weapon, a design not seen since the Japanese Type II machine pistol.

The first Uzi submachine gun was designed by Major Uziel Gal in the late 1940s. The prototype was finished in 1950; first introduced to IDF special forces in 1954, the weapon was placed into general issue two years later. The Uzi has found use as a personal defense weapon by rear-echelon troops, officers, artillery troops and tankers, as well as a frontline weapon by elite light infantry assault forces.

The Uzi has been exported to over 90 countries. Over its service lifetime, it has been manufactured by Israel Military Industries, FN Herstal, and other manufacturers. From the 1960s through the 1980s, Uzi submachine guns were sold to more military and police markets than any other submachine gun ever made.

Gal was born in Weimar, Germany. When the Nazis came to power in 1933 he moved first to England and later, in 1936, to Kibbutz Yagur in the British Mandate of Palestine. In 1943, he was arrested for illegally carrying a gun and sentenced to six years in prison. However, he was pardoned and released in 1946, serving less than half of his sentence.

Gal began designing the Uzi submachine gun in 1948, shortly after the Israel War of Independence. In 1951, it was officially adopted by the Israeli Defense Forces and was called the Uzi after its creator. Gal did not want the weapon to be named after him but his request was ignored. In 1955, he was decorated with Tzalash HaRamatkal and in 1958, Gal was the first person to receive the Israel Security Award, presented to him by Prime Minister David Ben-Gurion for his work on the Uzi.

In 1975, Gal retired from the IDF, and the next year he moved to Philadelphia, Pennsylvania, so that his daughter Tamar, who had serious brain damage, could receive special medical attention.
In the early 1980s, Gal assisted in the creation of the Ruger MP9 submachine gun.

Gal continued his work as a firearms designer until his death from cancer in 2002. 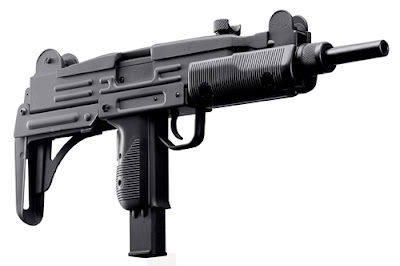 The Uzi uses an open bolt, blowback-operated design. The open bolt design exposes the breech end of the barrel, and improves cooling during periods of continuous fire; however, it means that since the bolt is held to the rear when cocked, the receiver is more susceptible to contamination from sand and dirt ingress. It and the Czechoslovak series 23 to 26 were the first weapons to use a telescoping bolt design, in which the bolt wraps around the breech end of the barrel. This allows the barrel to be moved far back into the receiver and the magazine to be housed in the pistol grip, allowing for a heavier, slower-firing bolt in a shorter, better-balanced weapon.

The weapon is constructed primarily from stamped sheet metal, making it less expensive per unit to manufacture than an equivalent design machined from forgings. With relatively few moving parts, the Uzi is easy to strip for maintenance or repair. The magazine is housed within the pistol grip, allowing for intuitive and easy reloading in dark or difficult conditions, under the principle of 'hand finds hand'. The pistol grip is fitted with a grip safety, making it difficult to fire accidentally. However, the protruding vertical magazine makes the gun awkward to fire when prone. The Uzi features a bayonet lug.

When the gun is de-cocked, the ejector port closes, preventing entry of dust and dirt. Though the Uzi's stamped-metal receiver is equipped with pressed reinforcement slots to accept accumulated dirt and sand, the weapon can still jam with heavy accumulations of sand in desert combat conditions when not cleaned regularly.

The Uzi gun was designed by Major (Captain at the time) Uziel Gal of the Israel Defense Forces (IDF) following the 1948 Arab-Israeli War. The weapon was submitted to the Israeli army for evaluation and won out over more conventional designs due to its simplicity and economy of manufacture. Gal did not want the weapon to be named after him, but his request was ignored. The Uzi was officially adopted in 1951. First introduced to IDF special forces in 1954, the weapon was placed into general issue two years later. The first Uzis were equipped with a short, fixed wooden buttstock, and this is the version that initially saw combat during the 1956 Suez campaign. Later models would be equipped with a folding metal stock.

The Uzi was used as a personal defense weapon by rear-echelon troops, officers, artillery troops and tankers, as well as a frontline weapon by elite light infantry assault forces. The Uzi's compact size and firepower proved instrumental in clearing Syrian bunkers and Jordanian defensive positions during the 1967 Six-Day War. Though the weapon was phased out of frontline IDF service in the 1980s, some Uzis and Uzi variants were still used by a few IDF units until December 2003, when the IDF announced that it was retiring the Uzi from all IDF forces.

In general, the Uzi was a reliable weapon in military service. However, even the Uzi fell victim to extreme conditions of sand and dust. During the Sinai campaign of the Yom Kippur War, IDF army units reaching the Suez reported that of all their small arms, only the 7.62 mm FN MAG machine gun was still in operation.


The Uzi proved especially useful for mechanized infantry needing a compact weapon, and for infantry units clearing bunkers and other confined spaces. However, its limited range and accuracy in automatic fire (approximately 50 m) could be disconcerting when encountering enemy forces armed with longer-range small arms, and heavier support weapons could not always substitute for a longer-ranged individual weapon. These failings eventually caused the phaseout of the Uzi from IDF forces.

The Uzi has been used in various conflicts outside Israel and the Middle East during the 1960s and 1970s. Quantities of 9 mm Uzi submachine guns were used by Portuguese cavalry, police, and security forces during the Portuguese Colonial Wars in Africa. 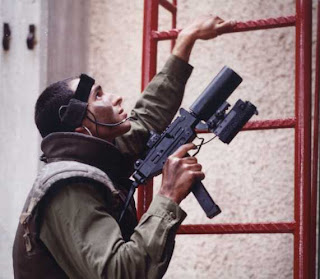 Total sales of the weapon to date (end 2001) has netted IMI over $2 billion (US), with over 90 countries using the weapons either for their armed forces or in law enforcement.

The German Bundeswehr used the Uzi since 1959 under the name MP2 (especially for tank crews) and is now changing to the Heckler & Koch MP7.

The Irish Gardaí ERU are replacing the Uzi with the HK MP7.

In Rhodesia in the late 1970s the Uzi was produced under license, from Israeli-supplied, and later made in Rhodesia, components. It was commonly called the "Rhuzi" (although the title was applied to some indigenous submachine gun designs).

The United States Secret Service used the Uzi as their standard submachine gun from the 1960s until the early 1990s, when it was phased out and replaced with the Heckler & Koch MP5 and FN P90. When President Ronald Reagan was shot on March 30, 1981 outside of the Washington Hilton Hotel by John Hinckley Jr., Secret Service Special Agent Robert Wanko pulled an Uzi out of a briefcase and covered the rear of the presidential limousine as it sped to safety with the wounded president inside.

The Uzi Submachine Gun is a Standard Uzi with a 10-inch barrel. It has a rate of automatic fire of 600 rounds per minute (rpm) when chambered in 9mm Parabellum; the .45 ACP model's rate of fire is slower at 500 rpm.

The Uzi-Pro is an improved variant of the Micro-Uzi has been launched in the year 2010 by Israel Weapon Industries Ltd. (I.W.I.), formerly the Magen ("Small Arms") division of Israel Military Industries. The Uzi-Pro is a blowback-operated, select-fire, closed-bolt submachine gun with a large lower portion, comprising grip and handguard, entirely made of polymer to reduce weight; the grip section has been redesigned to allow two-handed operation and facilitate control in full-automatic fire with such a small-sized firearm. The Uzi-Pro features three Picatinny rails, two at the sides of the barrel and one on the top for optics, having the cocking handle been moved on the left side.


CIVILIAN VARIANTS
The Uzi Carbine is similar in appearance to the Uzi submachine gun, the Uzi carbine is fitted with a 16 inch barrel (400mm), to meet the minimum rifle barrel length requirement for civilian sales in the United States. It fires from a closed-bolt position in semi-automatic mode only and uses a floating firing pin as opposed to a fixed firing pin.

In the mid 1990s Norinco of China manufactured an unlicensed copy of the Uzi model B with modifications made to avoid the US Assault Weapon Import Ban. The folding stock was replaced with a wooden thumbhole stock, the barrel nut was welded in place, and the bayonet lug was removed. The gun had a gray parkerized finish and was sold as the M320.

The Mini-Uzi Carbine is similar in appearance to the Mini-Uzi submachine gun, the Mini-Uzi carbine is fitted with a 19.8 inch barrel, to meet the minimum rifle overall length requirement for civilian sales in the United States. It fires from a closed-bolt position in semi-automatic mode only.

The Uzi Pistol is a semi-automatic, closed bolt, and blowback-operated pistol variant. Its muzzle velocity is 345 m/s. It is a Micro-Uzi with no shoulder stock or full-automatic firing capability. The intended users for the pistol were various security agencies in need of a high-capacity semi-automatic pistol, or civilian shooters that wanted a gun with those qualities and the familiarity of the Uzi style. It was introduced in 1984 and produced until 1993.

A company known as Vector Arms has built and marketed "pistol versions" of the Uzi Carbine and the Mini-Uzi. These versions lack a shoulder stock and have a shorter barrel. 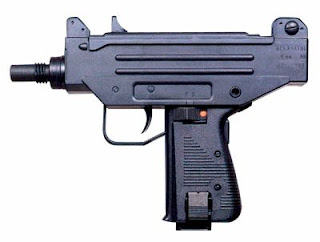