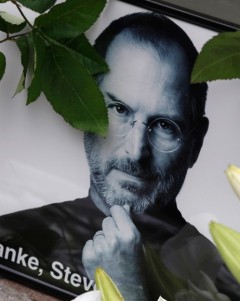 A small private  funeral for Steve Jobs took  place on  Friday, the Wall Street Journal has revealed , quoting a  person "familiar with the matter."  The person wouldn't say where or when the event took place, out of  respect for the Jobs family's privacy.

The event came two days two days after the Apple cofounder died  at 56 following  a long battle with pancreatic cancer.

There are no plans for a public memorials but the company is "planning a celebration of Steve's extraordinary life" for staff members,  said CEO Tim Cook earlier in the week . He did not say  when or where.

A statement from the Jobs' family referred to a website "for those who wish to offer tributes and memories," It was unclear when that would happen, or what the address will be, said the San  Jose Mercury News.  As the paper put it ,  "Private" is Apple's middle name. "

The paper said some fans were hoping for a large outdoor gathering somewhere in the San Francisco Bay Area, "where the faithful can assemble and share stories of how their lives were changed by Jobs' magical handiwork. "

But Roger Kay, the president of Endpoint Technologies , said, "A public memorial seems over the top to me, because there isn't really a core to it. A public event sounds to me like deification, and I'm nervous about the deification of any human being because it's dangerous."

Kay said Jobs would probably tell his fans : "Don't spend time thinking about me, think about yourselves because you're still alive and you need to go on about your lives."

Leander Kahney, editor and publisher of Cult of Mac, said , "There's a real need for the public to be able to recognise his achievements, to be able to mourn the man in public, together. His memorial should be a shared event and it shouldn't be kept private."

Posted by pratanacoffeetalk at 8:13 AM