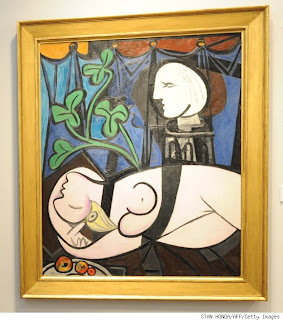 The most expensive painting ever sold at auction, "Nude, green leaves and bust" by Pablo Picasso, goes for the first time on public display starting today at Tate Modern in London.

Picasso's work of 1932, which sold for $ 106.5 million at Christie's in New York last year, has been provided on loan to the Tate gallery by its owner, an anonymous private collector, and will be displayed in a new room dedicated to Picasso in the Poetry and Dream section. The painting is oil on canvas and measures 162 cm × 130 cm.

"Nude, green leaves and bust" is part of a series of paintings that Picasso made of his mistress Marie-Thérèse Walter. The paintings were done by the artist at Boisgeloup, Normandy, in the beginning of 1932. According to Nicholas Serta, director the Tate Modern "these paintings are considered his greatest achievements of the interwar period," reports The Guardian.

Picasso met Marie-Thérèse in 1927 at the Paris Metro and they became lovers, but kept their relationship secret because the artist was married to Olga Khokhlova. Other paintings of Marie-Thérèse Walter done by Picasso in 1932 are La Lecture (Reading), Le Rêve (The Dream) and Nu au Fauteuil Noir (Nude in a Black Armchair).

Before being sold in May 2010, the work had been held for nearly six decades by Sidney and Frances Brody of Los Angeles. The collectors had purchased the work in 1951 at Paul Rosenberg & Co., who had bought it directly from Picasso in 1936. Since then the painting has only presented in public once, in 1961, to commemorate the 80 th birthday of Picasso. Fifty years later, the second public showing starting today at Tate Modern is certain to arise high interest among Picasso admirers and art lovers in general.

THE AUCTION
Frances Brody died in November 2009. On May 4, 2010, the painting was sold at Christies in New York City. Christie's won the rights to auction the collection against London-based Sotheby's. The collection as a whole was valued at over US$150 million, while the work was originally expected to earn $80 million at auction.
There were eight bidders at the auction house, while the winning bid was taken via telephone for $95 million. Including the buyer's premium, the price reached US$106.5 million. When inflation is ignored, the painting broke the record price for an art work sold at auction. The previous auction record was set in February 2010 by Alberto Giacometti's L'Homme qui marche I, which sold for $104.3 million. 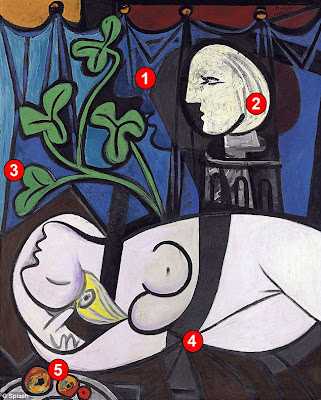 1. Peeping Pablo
Look carefully, and here you can just see the black outline of Picasso's own nose and lips, partly hiding behind a blue veil. This signifies the secrecy of his illicit relationship with his muse.

2. Double or bust
Above the reclining figure of Marie-Therese is a depiction of her own bust on a classical pedestal, a sign of Picasso's high esteem for her.

He had made a sculpture bust of her the previous year, and according to Conor Jordan, the head of Modern Art in Christie's, New York, there is an element of self-congratulation in its inclusion in the painting - as if Picasso were pointing out his own virtuosity.

The paint on the bust in the picture is ladled on with a palette knife, making it seem like a three-dimensional statue, in contrast to the smoothness of Marie-Therese's body.

3. Lover's leaves
These large green leaves depict a philodendron, a common creeping houseplant whose name means 'love tree'.
Picasso owned his own philodendron which he kept in the bathroom and grew so astonishingly quickly that he once said that it almost took over his life.

By including it here, he is perhaps making a reference to his all-consuming obsession with Marie-Therese.

5. Forbidden fruit
By his mistress's elbow, Picasso has painted a plate of apples, a symbol since Biblical times of sexual temptation.
-------------
Source:
Read more: http://www.digitaljournal.com/article/304373#ixzz1HTA2LQgj
http://en.wikipedia.org/wiki/Nude,_Green_Leaves_and_Bust
Photos:
http://luxedb.com/did-abramovich-buy-picasso’s-nude-green-leaves-and-bust/did-abramovich-buy-picasso’s-nude-green-leaves-and-bust
http://www.artoflegendindia.com/images/images_big/pobeb013_nude_green_leaves_and_bust.jpg
http://www.dailymail.co.uk/news/worldnews/article-1272698/Picasso-painting-Nude-Green-Leaves-Bust-fetches-record-106-5m-Christies.html
Posted by pratanacoffeetalk at 8:09 AM