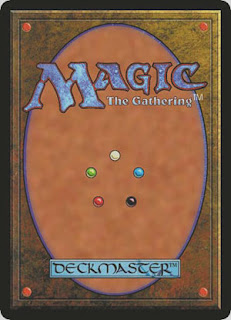 Magic: The Gathering (colloquially Magic or MTG) is a collectible card game created by mathematics professor Richard Garfield and introduced in 1993 by Wizards of the Coast. Magic is the first example of the modern collectible card game genre and still thrives today, with an estimated six million players in over seventy countries. Magic can be played by two or more players each using a deck of printed cards or a deck of virtual cards through the Internet-based Magic: The Gathering Online or third-party programs.

Each game represents a battle between powerful wizards, known as "planeswalkers", who use the magical spells, items, and fantastic creatures depicted on individual Magic cards to defeat their opponents. 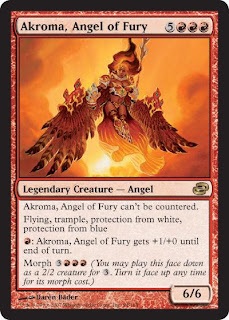 Although the original concept of the game drew heavily from the motifs of traditional fantasy role-playing games such as Dungeons & Dragons, the gameplay of Magic bears little resemblance to pencil-and-paper adventure games, while having substantially more cards and more complex rules than many other card games.

An organized tournament system and a community of professional Magic players has developed, as has a secondary market for Magic cards. Magic cards can be valuable due to their rarity and utility in game play. 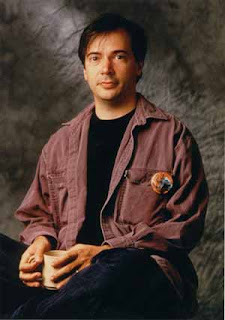 Richard Garfield, the creator of the game, was a professor at Whitman College in 1993. In his spare time he worked with local volunteer playtesters to help refine the game during the 1993 school year. Peter Adkison (then CEO of Wizards of the Coast games company) first met with Garfield to discuss Garfield's new game RoboRally. Adkison was enthusiastic about the game, but decided that Wizards of the Coast lacked the resources to produce it at that point. He did like Garfield's ideas and mentioned that he was looking for a portable game that could be played in the downtime that frequently occurs at gaming conventions. Garfield returned and presented the general outline of the concept of a Trading Card Game. Adkison immediately saw the potential of the game and agreed to produce it. After two years of development Magic: The Gathering underwent a general release on 5 August 1993.

While the game was simply called "Magic" through most of playtesting, when the game had to be officially named, a lawyer informed them that Magic was too generic to be trademarked. "Mana Clash" was instead chosen to be the name used in the first solicitation of the game. Everybody involved with the game still called it Magic, though. After further consultation with the lawyer it was decided to rename the game to Magic: The Gathering, thus making the name able to be trademarked. 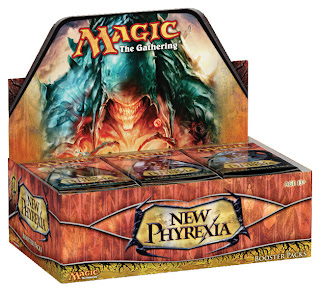 A patent was granted to Wizards of the Coast in 1997 for "a novel method of game play and game components that in one embodiment are in the form of trading cards" that includes claims covering games whose rules include many of Magic's elements in combination, including concepts such as changing orientation of a game component to indicate use (referred to in the Magic and Vampire: The Eternal Struggle rules as "tapping") and constructing a deck by selecting cards from a larger pool. The patent has aroused criticism from some observers, who believe some of its claims to be invalid. In 2003, the patent was an element of a larger legal dispute between Wizards of the Coast and Nintendo, regarding trade secrets related to Nintendo's Pokémon Trading Card Game. The legal action was settled out of court, and its terms were not disclosed.

The success of the initial edition prompted a reissue later in 1993, along with expansions to the game. Arabian Nights was released as the first expansion in December 1993. New expansions and revisions of the base game ("Core Sets") have since been released on a regular basis, amounting to four releases a year. While the essence of the game has always stayed the same, the rules of Magic have undergone three major revisions with the release of the Revised Edition in 1994, Classic Edition in 1999, and Magic 2010 in July 2009. With the release of the Eighth Edition in 2003, Magic also received a major visual redesign. 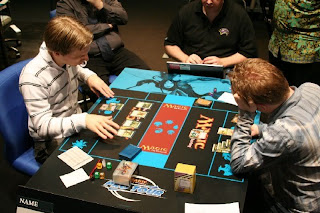 In 1996, Wizards of the Coast established the "Pro Tour", a circuit of tournaments where players can compete for sizable cash prizes over the course of a single weekend-long tournament. In 2009 the top prize at a single tournament was US$40,000. Sanctioned through The DCI, the tournaments added an element of prestige to the game by virtue of the cash payouts and media coverage from within the community. As of 2009 Wizards of the Coast has given out more than $30,000,000 in prizes at various professional tournaments, including Pro Tours, Grand Prixs, and National championships.

Magic, like many other games, combines chance and skill. One frequent complaint about the game involves the notion that there is too much luck involved, especially concerning possessing too many or too few lands. Early in the game especially, too many or too few lands could ruin a player's chance at victory without the player having made a mistake. This in-game statistical variance can be minimized by proper deck construction, as an appropriate land count can reduce mana problems. The standard land count in most 60-card decks ranges from 20 to 28, although the use of special spells or lands and the relative costs of the main spells within the deck can substantially increase or decrease the number of lands required. Other cards can minimize the player's dependence on mana. 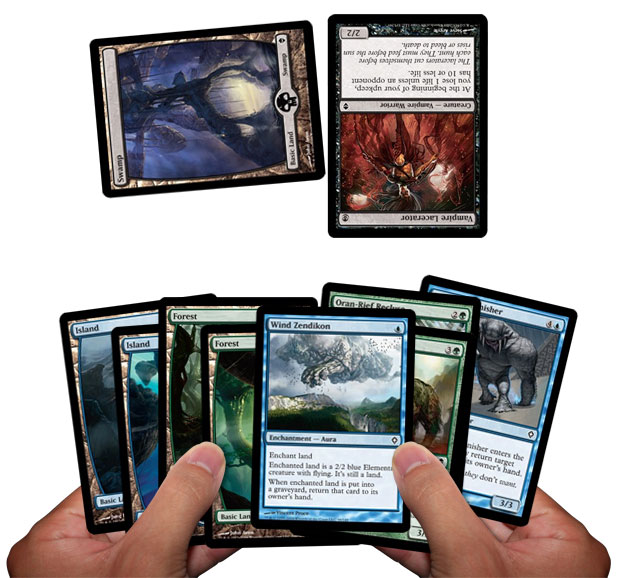 A "mulligan" rule was later introduced into the game, first informally in casual play and then in the official game rules. The modern "Paris mulligan" allows players to shuffle an unsatisfactory opening hand back into the deck at the start of the game, draw a new hand with one fewer card, and repeat until satisfied. In multiplayer, a player may take one mulligan without penalty, while subsequent mulligans will still cost one card. The original mulligan allowed a player a single redraw of seven new cards if that player's initial hand contained seven or zero lands. A variation of this rule called a "forced mulligan" is still used in some casual play circles and in multiplayer formats on Magic Online, and allows a single "free" redraw of seven new cards if a player's initial hand contains seven, six, one or zero lands.


RECEPTION
Magic was an immediate success for Wizards of the Coast. Early on they were even reluctant to advertise the game because they were unable to keep pace with existing demand. Initially Magic attracted many Dungeons & Dragons players, but the following included all types of other people as well. The success of the game quickly led to the creation of similar games by other companies as well as Wizards of the Coast themselves. While TSR's Spellfire did not become very popular, Wizards of the Coast tried to follow up Magic's success with Jyhad (now called Vampire: The Eternal Struggle), a game about modern-day vampires. Other similar games included Trading Card Games based on Star Trek and Star Wars. 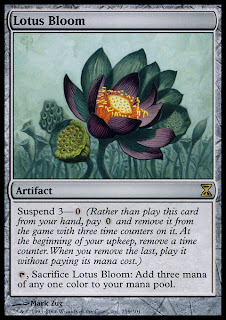 In addition several individuals including Richard Garfield and Donato Giancola won personal awards for their contributions to Magic.

The DCI maintains a set of rules for being able to sanction tournaments, as well as runs its own circuit. Some hobby shops offer "Gateway" tournaments as a "casual" entrance to structured play. The same shops often offer "Friday Night Magic" tournaments as a stepstone to more competitive play.

The DCI runs the Pro Tour as a series of major tournaments to attract interest. The right to compete in a Pro Tour has to be earned by either winning a Pro Tour Qualifier Tournament or being successful in a previous tournament on a similar level. A Pro Tour is usually structured into two days of individual competition played in the Swiss format. On the final day, the top eight players compete with each other in an elimination format to select the winner.

At the end of the competition in a Pro Tour, a player is awarded Pro Points depending on their finishing place. If the player finishes high enough, they will also be awarded prize money.[46] Frequent winners of these events have made names for themselves in the Magic community, such as Gabriel Nassif, Kai Budde and Jon Finkel. As a promotional tool, the DCI launched the Hall of Fame in 2005 to honor selected players.

Invitation to a Pro Tour, Pro Points and prize money can also be earned in lesser tournaments called Grand Prix that are open to the general public and are held more frequently throughout the year.

There is an active secondary market in individual cards among players and game shops. Many physical and online stores also sell single cards or "playsets" of four of a card. Common cards rarely sell for more than a few cents and are usually sold in bulk. Uncommon cards and weak rares typically cost around US$1. The most expensive cards in Standard tournament play usually cost approximately $40–50. On rare occasions, some have sold for $60–100. Foil versions of rare and mythic rare cards are typically about twice as valuable as the regular versions. 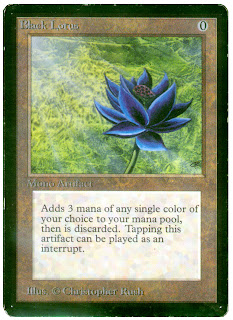 A few of the oldest cards –from Alpha to Legends– are much more valuable than any card currently in print. The most expensive card which was in regular print (as opposed to being a promotional or special printing) is Black Lotus, with average prices as of 2009 above $700 and high-quality "graded" copies rising above $3,000 — in 2005, a "Pristine 10 grade" Beckett Grading Services graded Beta Black Lotus was bought by Darren Adams, owner of West Coast Sports Cards & Gaming Distributors in Federal Way, Washington, for a record $20,000. A small number of cards of similar age, rarity, and playability —chiefly among them the other cards in the so-called "Power Nine"— routinely reach prices of several hundred dollars as well.

As new sets come out, older cards are occasionally reprinted. In 1995 Wizards of the Coast formulated an official reprint policy which established a "Reserve List" of cards that are unavailable to be printed again.  Note, however, that Magic Head Designer Mark Rosewater has indicated that the policy is now considered a mistake; nevertheless, they have also said that they will maintain the policy to ensure Wizards' promises are taken seriously, in an attempt to guarantee to collectors the value of many old cards.
----------------
http://en.wikipedia.org/wiki/Magic:_The_Gathering
http://ertaislament.files.wordpress.com/2011/01/r-garfield.jpg
http://geek-news.mtv.com/wp-content/uploads/2010/12/richard-garfield.jpg
http://images04.olx.com.ph/ui/1/73/04/3136904_1.jpg
http://kaldeem.files.wordpress.com/2010/03/mtg_logo.gif
http://media.photobucket.com/image/recent/zerotau/IMG_9180.jpg
http://images.esellerpro.com/2342/I/106/765/694_boosterdisplay.jpg
http://www.battlegames.be/catalog/images/2011Intropack.gif
http://www.wizards.com/mtg/images/daily/li/li77_handOfCards.jpg
http://www.wired.com/wiredscience/2008/04/find-your-inner/
http://store.timezonegaming.com/images/Time%20Spiral/259.jpg
http://media.wizards.com/images/magic/daily/arcana/704_squadronhawk.jpg
http://2.bp.blogspot.com/_OyvdrhfOFoA/TO1naSQUCtI/AAAAAAAAAAU/xXL6Xknct9w/s1600/FNM_logo.jpg
http://cdn2-b.examiner.com/sites/default/files/styles/image_full_width/hash/bf/34/bf34683997198c170110bfdea11979c1.jpg
http://1.bp.blogspot.com/_6mUbeQT1rdA/S-HlqSwkN3I/AAAAAAAAA68/qjCUb9KX6Ms/s1600/GrandPrix-1.jpg
http://www.comicemporium.net/blog/wp-content/uploads/2008/11/worldslogo.jpg
http://pozniak.pl/wp/wp-content/uploads/2011/02/BlackLotus.Mrez_.jpg
Posted by pratanacoffeetalk at 10:10 AM