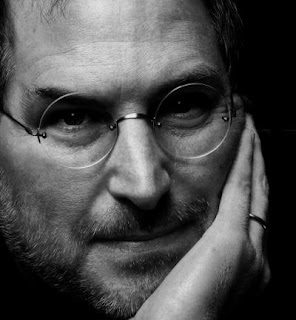 For every magical thing Steve Jobs revealed in his Apple keynote addresses, there were many other things he concealed. Like the devices he created, his life was more and more opaque even while becoming more and more celebrated. So his death this week came as a shock for nearly all of us, even though we knew that only grave illness could be keeping him from the company he co-founded and loved. He told us almost nothing about his prognosis—right through his last public appearance he was as turtleneck-clad and upbeat as ever. But suddenly, this week, he was gone.

Steve Jobs was extraordinary in countless ways—as a designer, an innovator, a (demanding and occasionally ruthless) leader. But his most singular quality was his ability to articulate a perfectly secular form of hope. Nothing exemplifies that ability more than Apple's early logo, which slapped a rainbow on the very archetype of human fallenness and failure—the bitten fruit—and turned it into a sign of promise and progress.

That bitten apple was just one of Steve Jobs's many touches of genius, capturing the promise of technology in a single glance. The philosopher Albert Borgmann has observed that technology promises to relieve us of the burden of being merely human, of being finite creatures in a harsh and unyielding world. The biblical story of the Fall pronounced a curse upon human work—"cursed is the ground for thy sake; in sorrow shalt thou eat of it all the days of thy life." All technology implicitly promises to reverse the curse, easing the burden of creaturely existence. And technology is most celebrated when it is most invisible—when the machinery is completely hidden, combining godlike effortlessness with blissful ignorance about the mechanisms that deliver our disburdened lives.

No company combined simplicity and hiddenness better than Apple under Mr. Jobs's leadership. Apple made technology not for geeks but for cool people—and ordinary people. It made products that worked, beautifully, without fuss and with great style. They improved markedly, unmistakably, from one generation to the next—not in the way geeks wanted technology to improve, with ever longer lists of features (I'm looking at you, Microsoft Word) and technical specifications, but in simplicity. Press the single button on the face of the iPad and, whether you are 5 or 95, you can begin using it with almost no instruction. It has no manual. You cannot open it up to see its inner workings even if you want to. No geeks required—or allowed. The iPad offers its blessings to ordinary mortals.

And so it came to pass that in the 2000s, when much about the wider world was causing Americans intense anxiety and frustration, the one thing that got inarguably better, much better, was our personal technology.

Politically, militarily, economically, the decade was defined by disappointment after disappointment—but technologically, it was defined by a series of elegantly produced events in which Steve Jobs, commanding more attention and publicity each time, strode on stage with a miracle in his pocket.

Steve Jobs was the evangelist of this particular kind of progress—and he was the perfect evangelist because he had no competing source of hope. He believed so sincerely in the "magical, revolutionary" promise of Apple precisely because he believed in no higher power. In his celebrated Stanford commencement address (which is itself an elegant, excellent model of the genre), he spoke frankly about his initial cancer diagnosis in 2003. It's worth pondering what Jobs did, and didn't, say:

"No one wants to die. Even people who want to go to heaven don't want to die to get there. And yet death is the destination we all share. No one has ever escaped it. And that is as it should be, because death is very likely the single best invention of life. It's life's change agent; it clears out the old to make way for the new. Right now, the new is you. But someday, not too long from now, you will gradually become the old and be cleared away. Sorry to be so dramatic, but it's quite true. Your time is limited, so don't waste it living someone else's life. Don't be trapped by dogma, which is living with the results of other people's thinking. Don't let the noise of others' opinions drown out your own inner voice, heart and intuition. They somehow already know what you truly want to become."

This is the gospel of a secular age. It has the great virtue of being based only on what we can all perceive—it requires neither revelation nor dogma. And it promises nothing it cannot deliver—since all that is promised is the opportunity to live your own unique life, a hope that is manifestly realizable since it is offered by one who has so spectacularly succeeded by following his own "inner voice, heart and intuition." 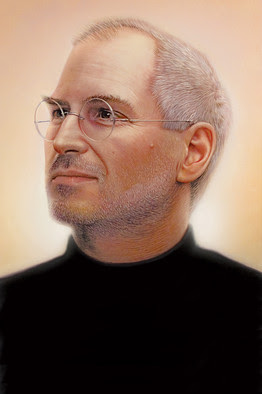 Mr. Jobs was by no means the first person to articulate this vision of a meaningful life—Socrates, the Buddha and Emerson come to mind. To be sure, fully embracing this secular gospel requires an austerity of spirit that few have been able to muster, even if it sounds quite fine on the lawn of Stanford University.

Upon close inspection, this gospel offers no hope that you cannot generate yourself and only the comfort of having been true to yourself. In the face of tragedy and evil—the kind of tragedy that cuts off lives not just at 56 years old but at 5 or 6, the kind of evil bent on eradicating whole tribes and nations from the earth—it is strangely inert.

Perhaps every human system of meaning fails or at least falls silent in the face of these harsh realities, but the gospel of self-fulfillment does require an extra helping of stability and privilege to be plausible. Death is "life's change agent"? For most human beings, that would sound like cold comfort indeed.

But the genius of Steve Jobs was to persuade us, at least for a little while, that cold comfort is enough. The world—at least the part of the world in our laptop bags and our pockets, the devices that display our unique lives to others and reflect them to ourselves—will get better. This is the sense in which the tired old cliché of "the Apple faithful" and the "cult of the Mac" is true. It is a religion of hope in a hopeless world, hope that your ordinary and mortal life can be elegant and meaningful, even if it will soon be dated, dusty and discarded like a 2001 iPod.

It is said that human beings can live for 40 days without food, four days without water and four minutes without air. But we cannot live for four seconds without hope.

It's probably true for nations as well.

Mr. Jobs's final leave of absence was announced this year on Martin Luther King Jr. Day. And, as it happened, Mr. Jobs died on the same day as one of Dr. King's companions, the Reverend Fred L. Shuttlesworth, one of the last living co-founders of the Southern Christian Leadership Conference.

Dr. King, too, had had a close encounter with his own mortality when he was stabbed by a mentally ill woman at a book signing in 1958. He told that story a decade later to a rally on the night of April 3, 1968, and then turned, with unsettling foresight, to the possibility of his own early death. His words, at the beginning, could easily have been a part of Steve Jobs's commencement address:

"Like anybody, I would like to live a long life. Longevity has its place. But I'm not concerned about that now."

But here Dr. King, the civic and religious leader, turned a corner that Mr. Jobs never did. "I just want to do God's will. And He's allowed me to go up to the mountain. And I've looked over. And I've seen the Promised Land. I may not get there with you. But I want you to know tonight, that we, as a people, will get to the promised land! And so I'm happy, tonight. I'm not worried about anything, I'm not fearing any man! Mine eyes have seen the glory of the coming of the Lord!"

Is it possible to live a good, full, human life without that kind of hope? Steve Jobs would have said yes in a heartbeat. A convert to Zen Buddhism, he was convinced as anyone could be that this life is all there is. He hoped to put a "ding in the universe" by his own genius and vision in this life alone—and who can deny that he did? 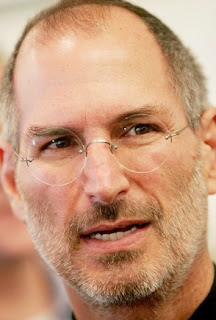 But the rest of us, as grateful as we are for his legacy, still have to decide whether technology's promise is enough to take us to the promised land. Is technology enough? Has the curse truly been repealed? Is the troublesome world simply awaiting another Steve Jobs, the evangelist of our power to unfold our own possibilities?

And, correspondingly, was the hope beyond themselves, and beyond this life, that animated Dr. King and his companions merely superfluous to the success of their cause, an accident of religious history rather than a civic necessity?

And that may be true of a future age as well. Our grandchildren may discover that technological progress, for all its gifts, is the exception rather than the rule. It works wonders within its own walled garden, but it falters when confronted with the worst of the world and the worst in ourselves. Indeed, it may be that rather than concealing difficulty and relieving burdens, the only way forward in the most tenacious human troubles is to embrace difficulty and take up burdens—in Dr. King's words, to embrace a "dangerous unselfishness."

Whatever the limits of Steve Jobs's secular gospel, or for that matter of Dr. King's Christian one, our keen sense of loss at his passing reminds us that the oxygen of human societies is hope. Steve Jobs kept hope alive. We will not soon see his like again. Let us hope that when we do, it is soon enough to help us deal with the troubles that this century, and every century, will bring.

Andy Crouch is the author of "Culture Making: Recovering Our Creative Calling" and an editor-at-large at Christianity Today.