THE MYSTERY OF THE LAREDO STAIRCASE SOLVED. 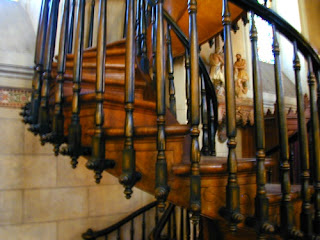 The Loretto Chapel in Santa Fe, New Mexico, USA is a former Roman Catholic church that is now used as a museum and wedding chapel.[1] It is known for its unusual helix shaped spiral staircase (the "Miraculous Stair"), an exceptional work created by French carpenter Francois-Jean "Frenchy" Rochas. The stairs are now considered too unsafe for regular use.

Although it has been the subject of legend and rumor, and the circumstances surrounding its construction and its builder are considered miraculous by the Sisters of Loretto and many visitors,[2] explanations for many of the claimed "mysteries" have been found. 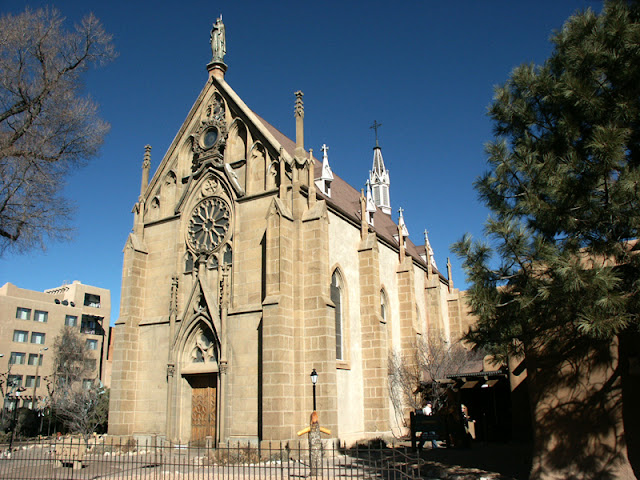 In 1872 Jean-Baptiste Lamy, the Bishop of the Santa Fe Archdiocese, commissioned the building of a convent chapel to be named Our Lady of Light Chapel, which would be in the care of the Sisters of Loretto. The chapel was designed by French architect Antoine Mouly in the Gothic Revival style, complete with spires, buttresses, and stained glass windows imported from France. Although it was built on a much smaller scale, the chapel bears an obvious resemblance to the Sainte-Chapelle in Paris. 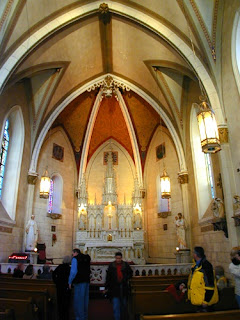 French and Italians masons went to work on the chapel, and although there were some financial worries, the chapel progressed without difficulty and with the aid of prayers by the Sisters to Joseph, the carpenter saint.  It wasn't until the very last stage, that the terrible design error was revealed.  There was no way to get from the chapel to the choir loft, which was exceptionally high, and there was no room for ordinary stairs to be built.

Many carpenters were called upon, but they all shook their heads, saying a stairway required much more space than was available, and suggested two alternatives; use a ladder or tear the whole thing down and start over.

But the Sisters, being women of God, were not discouraged.  Once again they called upon St. Joseph with a novena, and on the tenth day an old gray-haired man, carrying only a toolbox, appeared on a donkey, and asked if he could build the staircase.  The Sisters, ecstatic and grateful, gave their consent.

Inside the old man's toolbox was only a hammer, a saw and a T square.  It took him eight months to complete the beautiful and sturdy spiral staircase using NO NAILS and NO CENTER SUPPORT. 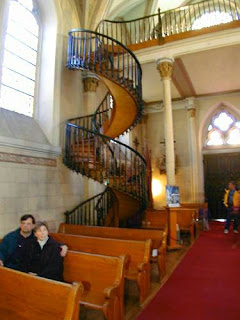 He had done it in a very small space, making two complete 360 turns with mysteriously perfect (how did he do it with the tools he had?) curves, and using pegs to hold the 33 steps together.

Knowing they had been blessed, the Sisters gave thanks, but when they went to pay the carpenter, he had disappeared, and when they went to to the lumber company, no one knew of any purchase, nor did they carry the type of wood that was used on the staircase.

The church, is cautious about spreading rumors of supernatural intervention, but the Sisters know that the miracle staircase is an answer to their novena to St. Joseph.  Some even think the gray-haired man on the donkey was St. Joseph himself.

Explanations for the mystery

The subject of rumor and legend for over a hundred years, the riddle of the carpenter's identity was finally solved in the late 1990s by Mary Jean Straw Cook, author of Loretto: The Sisters and Their Santa Fe Chapel (2002: Museum of New Mexico Press). His name was Francois-Jean "Frenchy" Rochas, an expert woodworker who emigrated from France and arrived in Santa Fe around the time the staircase was built. In addition to evidence that linked Rochas to another French contractor who worked on the chapel, Cook found an 1895 death notice in The New Mexican explicitly naming Rochas as the builder of "the handsome staircase in the Loretto chapel." 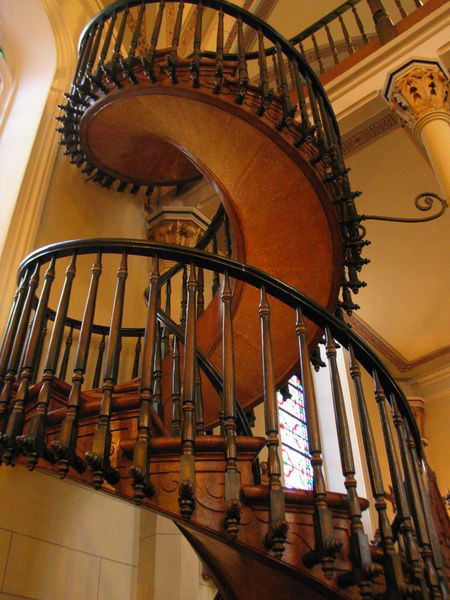 Rochas was only 43 years old when he met a violent death in December 1894. Unidentified attackers had shot him and left him to die alone in his small cottage and he was found dead 1895. This would mean that Rochas in the year 1878 came as a 27-year-young man to Santa Fe and built the staircase. The carpenter who came was attested as an elderly gray-haired man.

Johann Hadwiger, a German woodworker, was once credited with the design and construction of the stairs. The source of this claim, Johann's grandson Oscar Hadwiger, later admitted he had no proof of the claim.

Some more recent studies are critical of the supposed "miraculous" nature of the staircase. It has been claimed to be unsafe since its helix shape may make it oscillate just like a very large spring. As to its apparent ability to stand without a newel (central pole) support, this argument proceeds on a faulty premise that all spiral staircases need a central support. In fact, they do not, and lateral or outer supports can be effectively substituted for a central support. However, this staircase appears to have a concealed central support, an inner wood stringer of a very small radius that, because of its small size, functions effectively as a central pole. This technique is well known. The staircase also has an additional outer support to one of the columns that support the loft. This support was added later. The staircase is made of spruce, but insufficient sampling makes it impossible to conclusively affirm (or deny) the source of this wood.

The Loretto Chapel is now a museum and no longer functions as a church, but weddings may be arranged. It is owned by a private company. There is an entrance fee for the chapel.
------------
Source:
http://en.wikipedia.org/wiki/Loretto_Chapel
http://www.funtripslive.com/santa_fe/miracle_staircase/staircase.htm
Posted by pratanacoffeetalk at 3:14 AM