HOW TO DEAL WITH CRAYON BOXES 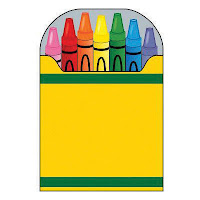 One of the memories that I will always have about when I was in Kindergarten, was the day my friend taught me about crayon boxes. She was my first real friend, and my best friend at the time. One day we were coloring, and she let me borrow crayons from her huge 64-count box. I thought they were so cool. My little 24-count box was nothing compared to hers.

As we were coloring, I reached over to put a crayon back in the box. If any of you have ever used crayons, you know that sometimes they don't go back in as easy as they came out, and that sometimes you end up with a huge bulge in the box. Well, that's what happened with this particular crayon.

I kept trying to force back in the box so it would fit, and my friend didn't like that too much, since it was her crayon box. She started throwing a fit and I remember her yelling, "Don't force it!" Then she continued to give me a demonstration on how you push the other crayons out of the way to make room for the other one going back into the box.

As we were growing up, we continued to stay good friends in grade school. I remember always teasing her about it, and she said she never remembered that day really, but I know it really happened, because I think it was the first time she ever yelled at me.

When we entered high school, things started to change, like they most often do. We still talked when we got the chance, but we started to make our own friends. We've stayed in touch, always saying hi in the halls and everything, but we weren't the same best friends we were in Kindergarten.

Just this year, my sophomore year, things really started to change for me. So many different things happened, I felt like I was lost in the world. I didn't know what to do or who I could turn to.

Then one day my friend came to my locker after school because she saw that I had been crying after spending the afternoon in the guidance office. She asked me what was wrong and I knew I could trust her, so I told her everything that was going on in my life. I told her this in a 7 page note and gave it to her in school.

A couple periods later she had stopped me in the halls and gave me a note and told me how she understood and everything. She wrote me and told me how I just need some time for things to get worked out, and that everything will be okay. At the end of the note, she wrote one of the sweetest things anyone has ever said to me. She wrote at the end: "I'll give you the same advice I gave you back when we were in Kindergarten: Don't Force It!"

When I read that it put a smile on my face, the first smile that I had cracked in awhile. I told her that I appreciated the note totally. It's funny that out of all the things people have said to me and tried to help me, those words she wrote in the note were the most inspirational.

It's weird that 10 years later the advice she had given me in kindergarten would help me out so much now. She can't give me a demonstration on how to push things away, like the crayons, but she made me open up my eyes, just like she did when she yelled at me in kindergarten.

Posted by pratanacoffeetalk at 3:42 PM