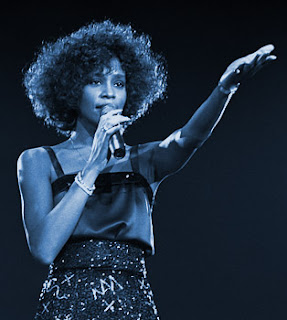 Whitney Houston, who ruled as pop music’s queen until her majestic voice and regal image were ravaged by drug use, erratic behavior and a tumultuous marriage to singer Bobby Brown, died Saturday. She was 48.

Beverly Hills police Lt. Mark Rosen told reporters outside the Beverly Hilton that Houston was pronounced dead at 3:55 p.m. in her room on the fourth floor of the hotel. Her body remained there and Beverly Hills detectives were investigating.

“There were no obvious signs of any criminal intent at this time,” Rosen said.

Houston’s publicist, Kristen Foster, said Saturday that the cause of her death was unknown.

Houston’s death came on the eve of music’s biggest night — the Grammy Awards. It’s a showcase where she once reigned, and her death was sure to cast a heavy pall on Sunday’s ceremony.

Her longtime mentor Clive Davis was to hold his annual concert and dinner Saturday, and a representative of the show said it would proceed.

Houston was supposed to appear at the gala, and Davis had told The Associated Press that she would perhaps perform: “It’s her favorite night of the year ... (so) who knows by the end of the evening,” he said.

Houston had been at rehearsals for the show Thursday, coaching singers Brandy and Monica, according to a person who was at the event but was not authorized to speak publicly about it. The person said Houston looked disheveled, was sweating profusely and liquor and cigarettes could be smelled on her breath.

Two days ago, she performed at a pre-Grammy party with singer Kelly Price.

Rosen said police received a 911 call from hotel security about Houston at 3:43 p.m. Saturday, and paramedics were already at the hotel because of a Grammy party. Paramedics unsuccessfully tried to resuscitate the singer, the lieutenant said.

The Rev. Al Sharpton said he would call for a national prayer Sunday morning during a service at Second Baptist Church in Los Angeles.

“The morning of the Grammys, the world should pause and pray for the memory of a gifted songbird,” Sharpton said in a written statement.

At her peak, Houston was the golden girl of the music industry. From the middle 1980s to the late 1990s, she was one of the world’s best-selling artists. She wowed audiences with effortless, powerful, and peerless vocals that were rooted in the black church but made palatable to the masses with a pop sheen.

Her success carried her beyond music to movies, where she starred in hits like “The Bodyguard” and “Waiting to Exhale.”

She had the perfect voice and the perfect image: a gorgeous singer who had sex appeal but was never overtly sexual, who maintained perfect poise.

She influenced a generation of younger singers, from Christina Aguilera to Mariah Carey, who when she first came out sounded so much like Houston that many thought it was Houston.

But by the end of her career, Houston became a stunning cautionary tale of the toll of drug use. Her album sales plummeted and the hits stopped coming; her once serene image was shattered by a wild demeanor and bizarre public appearances. She confessed to abusing cocaine, marijuana and pills, and her once pristine voice became raspy and hoarse, unable to hit the high notes as she had during her prime.

“The biggest devil is me. I’m either my best friend or my worst enemy,” Houston told ABC’s Diane Sawyer in an infamous 2002 interview with then-husband Brown by her side.

It was a tragic fall for a superstar who was one of the top-selling artists in pop music history, with more than 55 million records sold in the United States alone.

She seemed to be born into greatness. She was the daughter of gospel singer Cissy Houston, the cousin of 1960s pop diva Dionne Warwick and the goddaughter of Aretha Franklin.

Houston first started singing in the church as a child. In her teens, she sang backup for Chaka Khan, Jermaine Jackson and others, in addition to modeling. It was around that time when music mogul Clive Davis first heard Houston perform.

“The time that I first saw her singing in her mother’s act in a club ... it was such a stunning impact,” Davis told “Good Morning America.”

“To hear this young girl breathe such fire into this song. I mean, it really sent the proverbial tingles up my spine,” he added.

Before long, the rest of the country would feel it, too. Houston made her album debut in 1985 with “Whitney Houston,” which sold millions and spawned hit after hit. “Saving All My Love for You” brought her her first Grammy, for best female pop vocal. “How Will I Know,” “You Give Good Love” and “The Greatest Love of All” also became hit singles.

Another multiplatinum album, “Whitney,” came out in 1987 and included hits like “Where Do Broken Hearts Go” and “I Wanna Dance With Somebody.”

The New York Times wrote that Houston “possesses one of her generation’s most powerful gospel-trained voices, but she eschews many of the churchier mannerisms of her forerunners. She uses ornamental gospel phrasing only sparingly, and instead of projecting an earthy, tearful vulnerability, communicates cool self-assurance and strength, building pop ballads to majestic, sustained peaks of intensity.”

Her decision not to follow the more soulful inflections of singers like Franklin drew criticism by some who saw her as playing down her black roots to go pop and reach white audiences. The criticism would become a constant refrain through much of her career. She was even booed during the “Soul Train Awards” in 1989.

“Sometimes it gets down to that, you know?” she told Katie Couric in 1996. “You’re not black enough for them. I don’t know. You’re not R&B enough. You’re very pop. The white audience has taken you away from them.”

Some saw her 1992 marriage to former New Edition member and soul crooner Bobby Brown as an attempt to refute those critics. It seemed to be an odd union; she was seen as pop’s pure princess while he had a bad-boy image, and already had children of his own. (The couple had a daughter, Bobbi Kristina, in 1993.) Over the years, he would be arrested several times, on charges ranging from DUI to failure to pay child support.

But Houston said their true personalities were not as far apart as people may have believed.

“When you love, you love. I mean, do you stop loving somebody because you have different images? You know, Bobby and I basically come from the same place,” she told Rolling Stone in 1993. “You see somebody, and you deal with their image, that’s their image. It’s part of them, it’s not the whole picture. I am not always in a sequined gown. I am nobody’s angel. I can get down and dirty. I can get raunchy.”

It would take several years, however, for the public to see that side of Houston. Her moving 1991 rendition of “The Star Spangled Banner” at the Super Bowl, amid the first Gulf War, set a new standard and once again reaffirmed her as America’s sweetheart.

In 1992, she became a star in the acting world with “The Bodyguard.” Despite mixed reviews, the story of a singer (Houston) guarded by a former Secret Service agent (Kevin Costner) was an international success.

It also gave her perhaps her most memorable hit: a searing, stunning rendition of Dolly Parton’s “I Will Always Love You,” which sat atop the charts for weeks. It was Grammy’s record of the year and best female pop vocal, and the “Bodyguard” soundtrack was named album of the year.

She returned to the big screen in 1995-96 with “Waiting to Exhale” and “The Preacher’s Wife.” Both spawned soundtrack albums, and another hit studio album, “My Love Is Your Love,” in 1998, brought her a Grammy for best female R&B vocal for the cut “It’s Not Right But It’s Okay.”

But during these career and personal highs, Houston was using drugs. In an interview with Oprah Winfrey in 2010, she said by the time “The Preacher’s Wife” was released, “(doing drugs) was an everyday thing. ... I would do my work, but after I did my work, for a whole year or two, it was every day. ... I wasn’t happy by that point in time. I was losing myself.”

In the interview, Houston blamed her rocky marriage to Brown, which included a charge of domestic abuse against Brown in 1993. They divorced in 2007.

Houston would go to rehab twice before she would declare herself drug-free to Winfrey in 2010. But in the interim, there were missed concert dates, a stop at an airport due to drugs, and public meltdowns.

She was so startlingly thin during a 2001 Michael Jackson tribute concert that rumors spread she had died the next day. Her crude behavior and jittery appearance on Brown’s reality show, “Being Bobby Brown,” was an example of her sad decline. Her Sawyer interview, where she declared “crack is whack,” was often parodied. She dropped out of the spotlight for a few years.

Houston staged what seemed to be a successful comeback with the 2009 album “I Look To You.” The album debuted on the top of the charts, and would eventually go platinum.

Things soon fell apart. A concert to promote the album on “Good Morning America” went awry as Houston’s voice sounded ragged and off-key. She blamed an interview with Winfrey for straining her voice.

A world tour launched overseas, however, only confirmed suspicions that Houston had lost her treasured gift, as she failed to hit notes and left many fans unimpressed; some walked out. Canceled concert dates raised speculation that she may have been abusing drugs, but she denied those claims and said she was in great shape, blaming illness for cancellations.