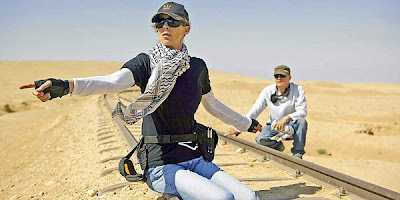 One project on the hunt for him is supposed to begin filming soon and faces decisions on how to address the news. Other potential projects now have an ending — but what might the premise be?


About three years ago, screenwriter Mark Boal became fascinated by the possibility of a movie about U.S. special forces' attempt to root out Osama bin Laden from Afghanistan's Tora Bora district.


Boal and director Kathryn Bigelow, who were collaborating on a then-little-known Iraq film, "The Hurt Locker" (for which they would both win Oscars), were intrigued both by the manhunt and the ways the terrorist leader had eluded capture. They would go on to option a book called "Kill Bin Laden," a memoir purportedly by a member of the Delta Force who was involved in the Tora Bora mission after the Sept. 11, 2001, attacks.

News of Bin Laden's demise at the hands of U.S. forces has now thrust the duo's project — which was due to begin shooting in the coming months — directly into the Hollywood limelight, and the filmmakers into a predicament: How should they adjust the story, if at all, to take into account the latest developments?

On one hand, Bin Laden's death suddenly offers the filmmakers the opportunity for an uplifting ending of sorts for American audiences — something that's been in short supply in post-9/11 military movies. But with nearly everyone on Earth now knowing how the Bin Laden story concludes, sustaining suspense could be a challenge, said one studio executive speaking on condition of anonymity.

There's another problem: The book focuses on a very different pursuit, many years ago, in the caves of Afghanistan. Bin Laden, of course, met his end in 2011 in a large, $1-million house not far from Pakistan's capital, Islamabad.

A person familiar with the project speaking on condition of anonymity said that filmmakers now plan a happier ending than that which capped the script previously, but declined to offer specifics. The person added that the movie will not be called "Kill Bin Laden" and will include "new context" that comes both from the news development and intelligence and defense agents whom Boal had been talking to along the way. Boal did not respond to an email seeking comment, and Bigelow's representative did not immediately respond to a request for comment.

Boal and Bigelow do have at least one advantage when it comes to timing: Their film is not a major studio project, which frequently get bogged down amid a need for consensus on creative and financial issues among many players. Megan Ellison, the daughter of Oracle software magnate Larry Ellison, is financing it, and the casting of the lead male role was underway when the Bin Laden news broke.

Ellison did not respond to a request for comment, but the person familiar with the project said the filmmakers still intend to shoot as early as this summer. The young producer still has a substantial sum hanging in the balance; when it was circulating earlier to Hollywood studios, the film had a budget of $20 million to $25 million, according to one executive familiar with the pitch.

Despite the movie world's infamous lag time between development and release, some Hollywood insiders said that it's possible for the film business to tap into the popular interest in Bin Laden. But they cautioned that to attract an audience, a film would need to be made with broad action elements and a minimum of nuance. (Nuance, some in Hollywood have argued, is what doomed the box-office fortunes of a host of Iraq and Afghanistan war movies, including "Rendition," "A Mighty Heart," "Stop-Loss" and even "Hurt Locker.")

"You need a big star and a lot of action, something the audience can cheer for," said one longtime studio marketing executive not involved in the project.

The Boal-Bigelow film wasn't the sole Bin Laden-related project kicking around Hollywood prior to Sunday's announcement of his death. There's long been a project at Paramount based on a book from CIA officer Gary Berntsen about the Bin Laden manhunt — Oliver Stone was at one point looking to direct it — but it's unclear if the news would infuse it with new life.

One action movie in the works that might be ripe for a Bin Laden plot element is the film based on the TV show "24," due out in 2012. In the television series, Kiefer Sutherland plays a shrewd and lethal government counter-terrorism agent, Jack Bauer, and his story lines often paralleled current events. Plot details for the movie, to be directed by Tony Scott, are still coming together, but fans seemed to be sending Scott a message on Sunday night: Shortly after President Obama announced Bin Laden had been killed, "Jack Bauer" was a trending topic on Twitter.

But others in Hollywood, including Bryan Singer, who directed "Valkyrie" — the 2008 Tom Cruise movie about an elite group conspiring to kill Hitler — said they saw in the Bin Laden saga a chance for something more detail- and character-driven.

"I could see a kind of 'All the President's Men,' where we track moments of intelligence and how agents followed the trail," he said. "Just because we know how the story ends doesn't mean it can't be interesting or exciting."