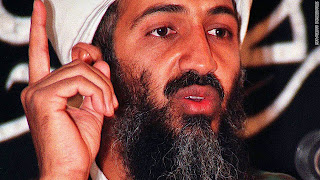 Osama bin Laden -- the longtime leader of al Qaeda -- was killed by U.S. forces in a mansion outside the Pakistani capital of Islamabad along with other family members, a senior U.S. official told CNN.


In an address to the nation late Sunday night, Obama called bin Laden's death "the most significant achievement to date in our nation's effort to defeat al Qaeda."

"Today, at my direction, the United States launched a targeted operation against that compound in Abbottabad, Pakistan," Obama said. "A small team of Americans carried out the operation with extraordinary courage and capability. No Americans were harmed. They took care to avoid civilian casualties. After a firefight, they killed Osama bin Laden and took custody of his body."

U.S. diplomatic facilities around the world were placed on high alert following the announcement of bin Laden's death, a senior U.S. official said, and the U.S. State Department should be sending out a new "worldwide caution" for Americans shortly. Some fear al Qaeda supporters may try to retaliate against U.S. citizens or U.S. institutions.

Hundreds of people arrived at the White House late Sunday night and chanted, "USA! USA!" They then chanted, "Hey, hey, goodbye!" in reference to the demise of bin Laden and then spontaneously sang the national anthem.

"This welcome news is a credit to our intelligence efforts and brings to justice the architect of the attacks on our country that killed nearly 3,000 people on September 11, 2001," said Sen. Susan Collins, R-Maine, the ranking Republican on the Homeland Security Committee, in a statement issued Sunday night.

The news brought some relief to the grieving family members of those killed on 9/11.

"This is important news for us, and for the world. It cannot ease our pain, or bring back our loved ones," Gordon Felt, president of Families of Flight 93, said in a statement. "It does bring a measure of comfort that the mastermind of the September 11th tragedy and the face of global terror can no longer spread his evil."

In his speech, Obama reiterated that the United States is not at war with Islam.

"I've made clear, just as President Bush did shortly after 9/11, that our war is not against Islam. Bin Laden was not a Muslim leader; he was a mass murderer of Muslims."

"As we have stated repeatedly since the 9/11 terror attacks, bin Laden never represented Muslims or Islam In fact, in addition to the killing of thousands of Americans, he and Al Qaeda caused the deaths of countless Muslims worldwide," the statement said. "We also reiterate President Obama's clear statement tonight that the United States is not at war with Islam."