THE NEW REVISION OF THE NEW AMERICAN BIBLE SPARKS A CONTROVERSY 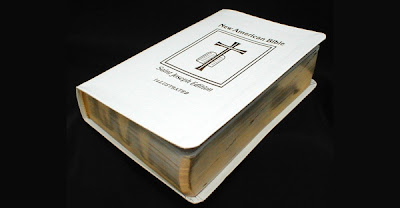 Revisions to the New American Bible scheduled to be released March 9 (Ash Wednesday) is causing some controversy as it replaces words such as "booty" and "virgin" to reflect a more modern meaning.

The New American Bible (NAB), one of the most popular translations of the Holy Scriptures is a Catholic Bible translation first published in 1970. It had its beginnings in the Confraternity Bible, which began to be translated from the original languages in 1948.


According to the U.S. Conference of Catholic Bishops, the revisions are the combined work of nearly 50 scholars from many faiths and a committee of Roman Catholic bishops. The work began in 1994 and its completion represents the first new edition since 1970 reported Reuters.

In an interview with Reuters, Mary Sperry, who oversees Bible licensing for the bishops said, "The revisions more accurately reflect translations of ancient Hebrew and Greek versions of the Old Testament and the constant evolution of modern-day language."

One of the more controversial changes to the text is most likely found in the 1970 version of Isaiah 7:14 where it says "the virgin shall be with child, and bear a son, and shall name him Immanuel." The text is important since it foretells the birth of Jesus Christ. The new text replaces the word "virgin" with "the young woman", reports USA Today. The Hebrew word "almah" which translates into English to mean "maiden" was later translated into the Greek word parthénos which translates simply as "virgin".

Sperry reportedly stated, "The bishops and the Bible are not signaling any sort of change in the doctrine of the virgin birth of Jesus. None whatsoever."

No effort appears to be made to restore the Divine Name to this version of the scriptures. The Tetragrammaton (written from right to left) may be transliterated into English as YHWH (or, JHVH). It occurs 6,828 times in the Hebrew text printed in Biblia Hebraica and Biblia Hebraica Stuttgartensia. Some also prefer the accepted Hebrew version of the divine name Yahweh.

The new edition will revert to more poetic versions of Psalm 23 to have it read, "I walk through the valley of the shadow of death," instead of "dark valley." And "I will dwell in the house of the Lord for years to come" was changed to "for endless days," which Sperry said carried a more profound and hopeful meaning.

The New American Bible uses this as the text in Psalm 83:19, "Show them you alone are the LORD, the Most High over all the earth." In the footnotes it is interesting to note, it says concerning this verse, "and may they be pursued until they acknowledge the name of Israel's God."

The current edition of the New American Bible sold more than one million copies last year, mostly in the United States, the Philippines, India, and Africa. The new version could spark a pickup in sales, Sperry predicted.

The edition will be available in many formats: as a family hardback, a basic paperback, as an "e-book," as an "app" for cell phones, and in a Braille version.