THE PLANET THAT SHOULDN'T BE THERE 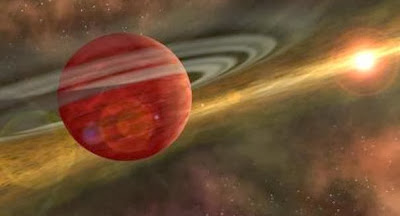 According to a December 5 news release from the University of Arizona (UA), an international team of astronomers has discovered the most remotely orbiting planet found to date around a single, sun-like star.  HD 106906 b — the first exoplanet to be discovered by the UA — is 11 times Jupiter’s mass and orbits its parent star at 650 times the average Earth-Sun distance, making the celestial body unlike anything in our own Solar System.

“This system is especially fascinating because no model of either planet or star formation fully explains what we see,” said Vanessa Bailey, a fifth-year graduate student in the UA’s Department of Astronomy and lead researcher on the study, in a statement.

Scientists think that planets close to their stars, such as Earth, amalgamate from small asteroid-like bodies born in the primordial disk of dust and gas that surrounds a forming star.  Still, this process acts too sluggishly to grow giant planets far from their star.  An additional proposed mechanism is that giant planets can form from a fast, direct collapse of disk material.  Yet, primordial disks seldom contain sufficient mass in their outer reaches to allow a planet like HD 106906 b to form.  Numerous alternate hypotheses have been put forward, including formation like a mini binary star system.

“A binary star system can be formed when two adjacent clumps of gas collapse more or less independently to form stars, and these stars are close enough to each other to exert a mutual gravitation attraction and bind them together in an orbit,” Bailey said.  ”It is possible that in the case of the HD 106906 system the star and planet collapsed independently from clumps of gas, but for some reason the planet’s progenitor clump was starved for material and never grew large enough to ignite and become a star.”

Bailey said that one problem with this picture is that the mass ratio of the two stars in a binary system is normally no more than 10:1.

This system is of specific interest as researchers can still identify the vestigial “debris disk” of material left over from planet and star formation.

“Systems like this one, where we have additional information about the environment in which the planet resides, have the potential to help us disentangle the various formation models,” Bailey said.

The research findings appear online in The Astrophysical Journal Letters, in an article entitled, “HD 106906 b: A planetary-mass companion outside a massive debris disk.”