INDIANA JONES LIVES TOGETHER WITH DISNEY 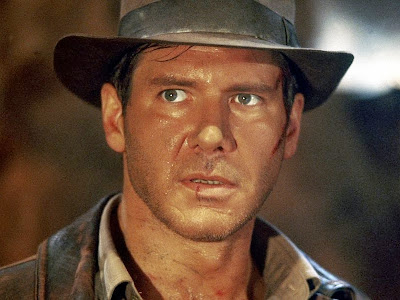 In a week filled with huge announcements and surprises, we're closing out the week on one of the biggest: Disney, which had previously bought Lucasfilm and the rights to "Star Wars," now also owns "Indiana Jones."

Before you cry out that he belongs in a museum, please note that under the terms of the deal Paramount Pictures will retain distribution rights to the first four films, as well as an active participation in any future installments. However, any possible "Indiana Jones 5: The Return Of LaBeouf" would be distributed and marketed solely by Disney.

This closely parallels the deal Disney set up after purchasing Marvel Studios, with Paramount slowly moving rights, distribution and marketing over to the Mouse. In fact, "Thor: The Dark World" was the first feature solely produced by Marvel Studios under the Disney banner after several joint features.

Currently there are no active plans for a fifth "Indiana Jones" movie, though the title has been rumored for a while. Back around the release of "Kingdom of the Crystal Skull," the fourth "Indiana Jones" movie, George Lucas stated he had an idea for a fifth movie he had sold Director Steven Spielberg on. Mixed reaction may have played a part in the film never coming to fruition, though the worldwide box office ($783 million) certainly tells another story.

"Indiana Jones," like "Star Wars" before it, has featured heavily at Disney theme parks, so it was a natural fit for the property to move to Disney. And though there was no official announcement with the purchase, chances are Disney wouldn't have purchased "Indiana Jones" without some sort of plans for the movie series.
--------------------------------------
http://www.mtv.com/news/articles/1718646/disney-buys-indiana-jones-rights.jhtml
http://www.tasteofcinema.com/wp-content/uploads/2013/09/indiana_jones.jpg
Posted by pratanacoffeetalk at 10:32 AM