FAST FOOD IS LINKED TO DEPRESSION 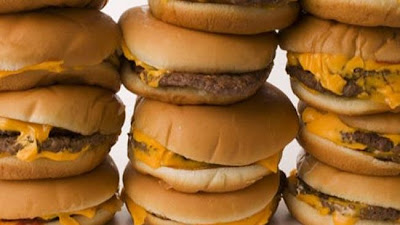 We have all enjoyed eating those deep fried potato chips, flavoured wafers and meat burgers as well as those creamy cakes, doughnuts and pizzas. But you might now want to do a re-think when you reach for your 'couch potato' or 'work cubicle' fare. Fast food is linked to depression, says a study.

The findings revealed an eye-opening health warning. Researchers at the University of Las Palmas de Gran Canaria and the University of Granada followed more than 8,960 people who had never been diagnosed with depression or taken antidepressants, reported PressTV. They also said that people who eat fast food regularly are more likely to have other unhealthy habits, which are tied to higher depression risk.

That apart, a 'dose-response' relationship was observed. What this means is that 'the more fast food you consume, the greater the risk of depression,' explained Almudena Sanchez-Villegas, lead author of the study.

“The more fast food you consume, the greater risk of depression,” warned senior researcher Almudena Sanchez-Villega based on the findings.

Researchers in Spain claim that depression is 51 percent more likely to occur in people who consume large amounts of fast food — like hamburgers, hot dogs and pizza — compared to those who don’t, according to ABC News. And don’t forget about other junk food items, like doughnuts and croissants. They are also linked to mood problems.

Guess what? The study throws light on the personality of the person consuming such fast food and explained that those participants who eat the most fast food and commercial baked goods are more likely to be single, less active and have poor dietary habits, which include eating less fruit, nuts, fish, vegetables and olive oil. Smoking and working more than 45 hours per week are other prevalent characteristics of this group. Naturally this leaves little room for a healthy, attractive persona.

The study that has been published in the Public Health Nutrition journal, also states that when it came to the consumption of commercial baked goods, the results are equally conclusive. Says dietician Nisha Jadhav, Mumbai, "This is certainly true. Eating unhealthily can make you sad. Such fast foods contain trans fats and saturated fats could contribute to depression. Cutting down in high sugary foods and sugary drinks also in your work day can lead to lesser mood swings at work," she adds.

"Although more studies are necessary, the intake of this type of food should be controlled because of its implications on both health (obesity, cardiovascular diseases) and mental well-being," study researcher Almudena Sánchez-Villegas said in a statement to the Huffington Post.

Experts also suggest that it may not be the food causing the depression, but that the depression may be causing people to eat the food.

"We use the term 'comfort food' for a reason," he added. "It can help alleviate stress, anxiety, and depression. So it may be that people with depression are turning to [fast food] for relief."