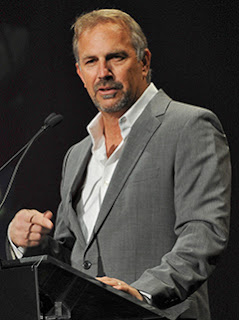 Actor/director Kevin Costner told a lesson-laden story about casting the "I Will Always Love You" singer in the 1992 flick The Bodyguard, for which he revealed filming was postponed a year until Houston had wrapped her tour.

The 57-year-old actor reminisced how Houston took off the professional makeup and used her own, but the lights melted it right off during her screen test.

"I asked her why she did it, and she said I just wanted to look my best. I asked her to trust me, and she said she would," Costner said. "A half hour later she went back to do her screen test and the studio fell in love with her… Whitney, you weren't just good enough, you were great."

"To you, Bobbi Kristina, and to all those young girls who are dreaming that dream, thinking that maybe they aren't good enough, I think Whitney would tell you, guard your bodies. And guard the precious miracle of your own life. Then sing your hearts out."

Choking up and pausing as he ended his speech, he said, "Off you go Whitney, off you go. Escorted by an army of angels to your heavenly Father. When you sing before him, don't you worry. You'll be good enough."

---------
http://www.usmagazine.com/celebrity-news/news/kevin-costner-applauded-for-emotional-speech-at-whitney-houstons-funeral-2012182
Posted by pratanacoffeetalk at 8:58 AM