"HOLEY" BULLETS: FASTER THAN THE BULLET WE KNOW 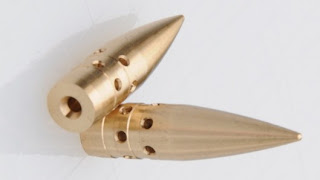 Competition shooters like their bullets to fly as fast (and thus straight) as possible, and they try to keep recoil to a minimum. Italian ammunition-maker CompBullet produces a series of bullets of the same name, which are claimed to both go faster than normal ammo, and produce less recoil.

The secret? The bullets have go-faster holes in them.

Available in several calibers, the copper alloy bullets have a main cavity in the base, with multiple "vents" machined into their sides. These reportedly serve several purposes.

First of all, when the gun is fired, the vents supposedly allow the propellant gases to go through the sides of the bullet, providing lubrication between it and the inside of the gun's barrel. 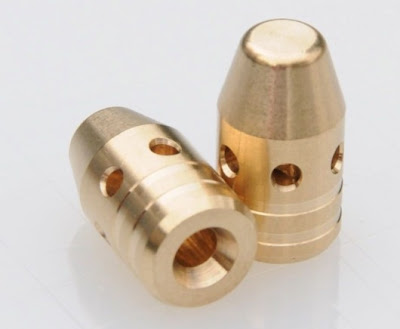 As the bullet exits the gun, the gases symmetrically shoot sideways out of the vents. This - so we're told - creates a "muzzle brake" effect. A muzzle brake is a device fitted to the end of a gun's barrel, that redirects the gases as they leave the gun, to offset the recoil effect. The vents in the CompBullets apparently serve the same purpose.

At the same time, the gases shooting out of the vents are also said to create a rocket-like effect, increasing the bullet's velocity. All of you physicists are welcome to weigh in on this one, but it's hard to say if gases exiting the sides of a bullet would really cause it to travel any faster than gases that were limited to pushing on it from behind.

Additionally, CompBullets are claimed to produce less muzzle flash and less smoke. If nothing else, all those holes probably make them lighter than regular bullets, to boot.