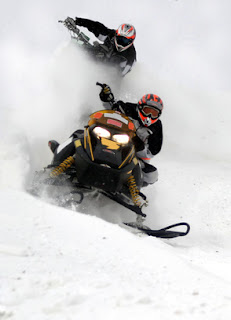 Several years ago I went to Jackson Hole, WY on a company sponsored ski trip. Prior to the trip, I had never been on the back of a motorized vehicle with less than 4 wheels.

The guys decided to go snowmobiling...

With the fastest group!

I later discovered that the leader of this particular group had been racing snowmobiles for years, so he had a very high comfort level. As things got going, I was a bit nervous, but as the speed increased I became terrified. I was convinced that I was going to be seriously injured, if I wasn't killed first...but I was also afraid of losing the group, which was seriously outpacing me.

It was all I could do to catch up while maintaining stability. We were flying through the mountains at speeds in excess of 55 mph, all the while taking sharp blind turns, crossing over hills and moguls and climbing mountains.

What happened to me that day was life-altering. I got so caught up in keeping up with the group that gradually I forgot my concerns for failure. Before the day was over, they weren't moving fast enough for me. I had discovered the thrill of the ride!

When we got back to the snowmobile rental shop later that day I saw a sweatshirt with a saying on it, which very neatly summed up the entire experience. I have since used this saying as a personal guide to many things in my life, from running my business to sailing. It reminds me that if the desire for great success becomes great enough, it alone can overcome the fear of failure.

"Faster and faster...until the greed for speed overcomes the fear of death."