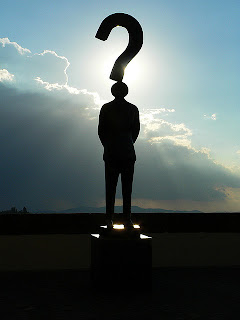 Why doesn't Tarzan have a beard when he lives in the jungle without a razor?

Why do we press harder on a remote control when we know the batteries are flat?

Why do banks charge a fee on 'insufficient funds' when they know there is not enough?

Why do Kamikaze pilots wear helmets?

What is the speed of darkness?

Why is it that people say they 'slept like a baby' when babies wake up every two hours?

If the temperature is zero outside today and it's going to be twice as cold tomorrow, how cold will it be?

Do married people live longer than single ones or does it only seem longer?

How is it that we put man on the moon before we figured out it would be a good idea to put wheels on luggage?

Why do people pay to go up tall buildings and then put money in binoculars to look at things on the ground?

Who was the first person to look at a cow and say, 'I think I'll squeeze
These pink dangly things here, and drink whatever comes out?'

Who was the first person to say, 'See that chicken there... I'm gonna eat the next thing that comes outta it's bum.'

Why do toasters always have a setting so high that could burn the toast to a horrible crisp, which no decent human being would eat?

Why is there a light in the fridge and not in the freezer?

Why does your Gynaecologist leave the room when you get undressed if they are going to look up there anyway?

Why does Goofy stand erect while Pluto remains on all fours? They're both dogs !

If quizzes are quizzical, what are tests?

If electricity comes from electrons, does morality come from morons?

Why do the Alphabet song and Twinkle, Twinkle Little Star have the same tune?

Do illiterate people get the full effect of Alphabet Soup?

Did you ever notice that when you blow in a dog's face, he gets mad at you, but when you take him on a car ride, he sticks his head out the window?

Does pushing the elevator button more than once make it arrive faster?

Do you ever wonder why you gave me your e-mail address in the first place?