A SECOND LOOK AT "BATMAN BEGINS" 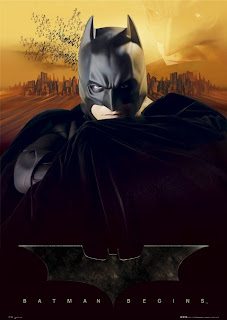 Months and months ago, when we weren't fortunate enough to have seen the first six minutes of "The Dark Knight Rises" or even a full-length trailer, one of the best pieces of info that we had about the conclusion to Christopher Nolan's Batman trilogy was that the film would circle back — thematically and perhaps story-wise — to "Batman Begins."

Since 2008, "The Dark Knight" and Heath Ledger have dominated most of the conversation around the series. The general feeling was that while "Batman Begins" was great, "The Dark Knight" transcended the superhero genre. That's why it comes as a surprise that when the trilogy ends, the underappreciated first film will play a big part.

With the release of "Rises" looming, there has never been a better excuse to rewatch "Begins," not only to look for clues of what's to come, but also to see how the film holds up in a post-"Dark Knight" world.

If you haven't watched "Batman Begins" in a few years, it may surprise you how entertaining it is. For his first Batman movie, Nolan crafted a tight origin story that seems almost quaint in scale compared to "The Dark Knight." That isn't to say "Begins" lacks ambition; it immediately jumps into a complicated story structure to tell Batman's origin, and the central conflict revolves around ninjas using insanity spray to poison Gotham.

The scaled-back feeling of "Begins" stems from where its primary focus lies: Batman. "The Dark Knight" was an ensemble piece with the Caped Crusader at its core. With that particular structure, many viewers felt they lost sight of Batman in the process. Though it worked for "Dark Knight" and gave the film a structure more complex than we deserved, the biggest takeaway from watching "Begins" may be that Nolan should give Batman and Christian Bale the time they deserve before the legend truly ends.

How "Rises" will return to the topics addressed in "Begins" remains to be seen, but what we can gather from rumors and the prologue is that the League of Shadows will return. If this is a case, I have to give credit to Nolan, David S. Goyer and Jonathan Nolan for not falling prey to a typical sequel problem. The League of Shadows isn't the kind of organization that's going to give up after one go. In "Begins," Ra's al Ghul mentions that poisoning Gotham's water supply was their second attempt at destroying Batman's hometown. Were they just going to give up after Batman ruined that attempt? Did Ra's fail to mention that they make a maximum of two attempts to destroy a city's infrastructure before they call it quits? They don't, so bringing them back for the finale makes perfect sense.

Most importantly, "Begins" makes a great argument that it and "The Dark Knight" are two great, but different Batman movies. Both work perfectly well, just on two different scales. Where "The Dark Knight" tackles a sprawling story with many intriguing key players, the aptly titled "Batman Begins" focuses on Bruce Wayne and his journey to becoming a legend, a smaller story but one worth telling.

Random takeaways: -Maggie Gyllenhaal is, by far, the better Rachel Dawes. -Chicago is Nolan's Gotham. It will be sorely missed. -The lady who introduces Bruce to the fake Ra's al Ghul must have been really confused after hearing, "This isn't Ra's al Ghul. I watched him die." -Ra's makes no mention of a daughter, but talks briefly about his wife. Hmmm. -As the train is about the crash, the look on Ra's' face intrigued me. -At the end of the movie, Wayne looks like he's rebuilding the Manor himself. He must have given that up a few weeks later. -The Joker tease at the end is just as cool as it was in 2005.
--------
http://www.mtv.com/news/articles/1677405/dark-knight-rises-batman-begins.jhtml
http://images.pictureshunt.com/pics/b/batman_begins-10442.jpg
Posted by pratanacoffeetalk at 8:17 AM