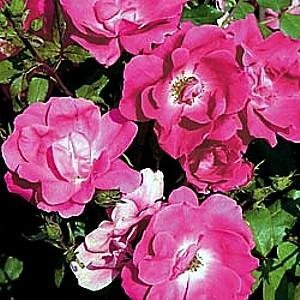 One spring morning a single woman in her thirties was sitting in her garden. The woman, mother of two, was depressed with life's challenges and thinking how hard it was trying to manage a career and raise two children on her own. She began to think of how strong her belief in God was, but still could not help feeling overwhelmed with the difficulties in her life. Her eye caught that of a rose bush in her garden and she began to look hard into the bush.

She started by looking at the base of the bush and how it was formed by one trunk coming up from the ground. She compared the trunk to the beginning of her adult life and how simple things seemed to her then. No grave responsibilities, just herself to take care of.

As she moved up the trunk, it started to bend, and a branch had formed. This branch had reminded her of when she was married. She admired how smoothly the branch sprouted from the main trunk and how bliss her marriage was in the beginning. But as she moved up the branch, it became twisted and bent and riddled with knots. Her thoughts changed to how her marriage had developed, and how it became abusive and tormenting.

The branch seemed to go on for a while, as did her marriage and then the branch just seemed to end without reason or understanding. But from this branch she noticed two rose stems that had sprouted from the branch. She was amazed of how the rose stems came from such a twisted and knotted branch. Then she realized that these were her two beautiful children.

Each stem different from the other but still the same. One having more thorns than the other, but both were dark green and strong. At the top of the stems grew the largest and most beautiful flowers on the entire bush. Both were a brilliant dark red. She thought of her children, and though they may not be perfect, they were hers and they were absolutely beautiful.

The woman then went back to the base of the trunk and noticed another branch, which from its beginning was as straight as a board, then began to bend slightly. This branch signified her career.

As with any trial in life, things first began smooth and as time went on challenges began to occur. Although this branch wasn't as twisted as the first, its small imperfections still reminded her of the mistakes and misunderstandings that have happened to her throughout her career. This branch sprouted many rose stems. Some were in full bloom some had yet to be opened. She thought of the many accomplishments throughout her career and how there are more yet to come.

Still again she looked at the base of the rose bush and noticed a third and final branch coming from the main trunk. This branch was thick and consisted of many small, yet smooth curves throughout. For every turn in the branch there was a rose stem. This branch seemed to her to signify the friendships and relationships she has encountered throughout her life.

Some of the stems had flowers that had died or wilted which made her recall some of her friendships that didn't last or those she just didn't keep in touch with. Yet there were many others on this branch that sprouted beautiful roses, both strong and full of life. These were her current friends. There were many of these roses on the bush and it seemed to fill up the bush and give it color and life. She was thankful they were there.

The woman then sat back and realized what she had been doing and seeing in the bush. She noted the absence of herself in the bush, and how everything seemed to point to someone else or some other aspect in her life, but she didn't see herself. She began to weep because the bush was full of roses, thick and beautiful.

Then without warning, she heard a deep and warm voice from within. The voice said to her:

"My child, do not weep, for what you do not see is in front of you. This bush is YOU. For every brilliant colored rose is a part of you. The bush grows upward to the heavens, which tells me of your faith. Each rose you see at the end of a stem, you see something else. I declare to you that this signifies that your faith will be rewarded in the end. As you trim the roses away, they grow back each time. This I declare to you is my promise to you that your reward will always be there. Each bend or twist in a branch and every thorn on a stem are obstacles in your life. But as you can see, each branch and stem has a rose. I tell you now that each rose shows that I have been there with you throughout your life. Your responsibility is simple, continue to water this bush as you have with your faith and it will continue to grow higher and stronger than you can imagine."

The woman began to weep again, only this time it was of joy. She was filled with a new spirit of faith and determination. To this day she has continued to care for this bush, watering it daily and trimming when needed.

The bush now stands six feet tall and is covered with brilliant roses. The two signifying her children, still the largest and brightest of all. And each day she seems down on her luck, she goes to the bush and is given new strength to see the day through.