JOHN LENNON AND HIS GUITARS 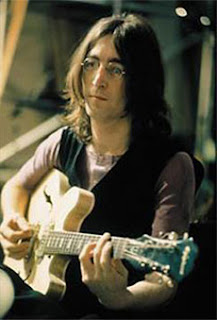 More than 40 years ago, John Lennon and Yoko Ono published a full-page ad in the New York Times around the new year that said simply: War Is Over! If You Want It! Happy Christmas, John & Yoko, an annual tradition that Ono continues today.

And whether you grew up hearing John's music as he made it or are too young to remember the '70s (many who were there can't either), these messages are still a comfort during this cold time of year, like a tap on the shoulder reminding us that John's wish for peace is alive and well, as if he too is somewhere still watching the wheels, "baking bread, feeding the cats, and sometimes ordering pizza" - as he described his life in an interview with the BBC in December, 1980.

It's also a subtle but powerful reminder that more than anyone before or since, John Lennon made rock and roll into art - the people's art. Rock and roll transcends politics, language or anything else that gets in the way, and that's largely due to John Lennon. Without him, would there be guitar stores in every city, all over the world? Today, you can hang an Epiphone Casino in the window of any music store anywhere in the world and even people who don't play an instrument will recognize the Casino as the guitar John Lennon played when he sang "Revolution."

Sure - Elvis, Little Richard, Chuck Berry and Buddy Holly were a revolution all on their own. But the idea that you could change the world with an electric guitar and a message of peace belongs to John Lennon. And all over the world, kids can look at that guitar and think: "I can make a difference." 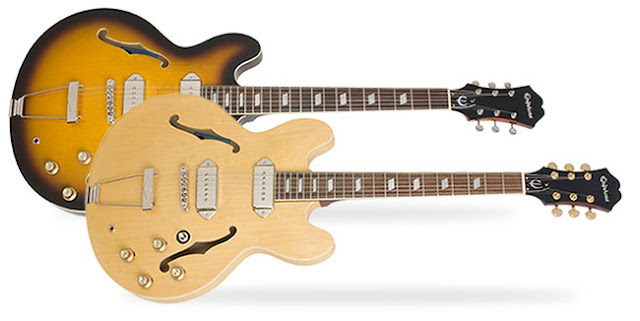 Epiphone's two versions of that Casino, the Inspired by John Lennon "1965" and the "Revolution" - copied from John's original - are wonderful recreations of Lennon's historic Casino, built to be played and admired. A few John Lennon 70th Anniversary Casinos, signed by Yoko Ono exclusively for sale in Japan, (Ishibashi and Ikebe) are still available and are surely one of the best guitar buys to be found.

Those who have tried either the Inspired by John Lennon "1965" or "Revolution" Casino, know that both models have their own spirit, as if one is for rock and roll, and the other is for revolutionary rock and roll.

As for Lennon's original Casino, the story goes that in late 1964, Paul McCartney purchased a Casino in London shortly after spending an evening at John Mayall's house, listening to blues artists like Otis Rush (Epi Riviera), Magic Sam (Epi Casino) and B. B. King (ES-355--notice a pattern?). All of these artists were exploring the curious phenomenon known as feedback. Inspired (and perhaps with a tad of brotherly envy), both George Harrison and Lennon bought matching Casinos in London in 1965. It was neither the most expensive nor the most unique guitar of its day. But it was - as it is now - a great and versatile instrument. After all, what else do you need? 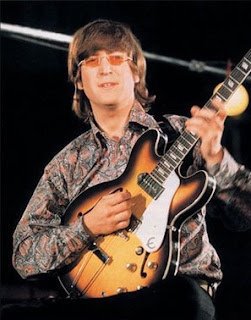 Soon after, the whole world became aware of the Casino during The Beatles' world tour in 1966, which was fraught with controversy in the U.S., the Philippines, and elsewhere. Throughout the rest of the '60s, the Epiphone Casino was Lennon's main guitar in the studio and can be heard on virtually all of his records through the sessions for Double Fantasy.

Even the most dedicated guitar fan and John Lennon fan (which makes most of us) might be surprised that John was an enthusiastic tinkerer of his own guitars. Lennon's Casino (along with all his other guitars) went through subtle changes in hardware, tremolo systems and color finishes. Each change seemed to reflect the tone of his music. His Casino was a stock sunburst in the mid-'60s, spray painted white (on the back) for Sgt. Pepper's Lonely Hearts Club Band, stripped natural for the "White Album" and Plastic Ono Band era, and probably was slated to be refinished again.

Today, at the end of 2011, John Lennon remains both a rocker and a man of peace and the Casino is still his iconic instrument. Photographs of Lennon are still just as striking as ever, whether you're looking at photos by Astrid Kirchherr or Jurgen Vollmer from the early '60s or Lennon hanging out with Cheap Trick, making sketches for Double Fantasy in 1980. During this time of year, it's also moving to revisit John's spirited and candid interviews. They are all over the place, if you care to look, and most are full of warm and generous quotes about his old mates, The Beatles, as well as his peers. 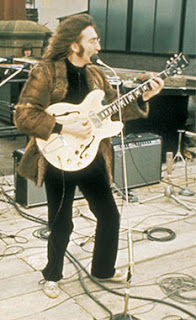 If you can find it, check out John's long interview with Brian Peebles of the BBC, made in December 1980, where Lennon comments on a wide range of topics from his appreciation for "brother" Paul McCartney ("I admire him. He's one of the most innovative bass players ever"), Beatle bootlegs ("we you never know which one you're talking to"), his fondness for new wave acts like B-52s ("they're copying Yoko to a 't'") and his love for heroes Chuck Berry, Buddy Holly and Elvis. Here, you'll also find lots of funny moments, too, especially his comments about stereo sound - "I was never sold on stereo. Why didn't we just put the drums in the middle? I'll have to ask George Martin."

From friends, we hear little-known facts and they all seem priceless. Lennon was Peter Boyle's best man, a fan of Fawlty Towers, a disciple of jazz pioneer Charlie Christian (John added Charlie's trademark pickup to his Les Paul Special), and sailed a small boat to safety during a storm in the Bermuda triangle. And then there are the very funny Beatles Christmas fan club records and old clips with Dudley Moore and Peter Cook.

Still, this time of year is tough and there's no getting around it.

But if you ever doubt that one person can make a big difference, think of John Lennon. Thanks to his belief that rock and roll could change the world, it did. And somewhere in the world, right now, there is a kid looking in the window of a guitar store at a Casino and thinking: "that's the Revolution guitar... cool."