HANS ZIMMER: THE MAN, THE MUSIC AND THE FILM COMPOSER 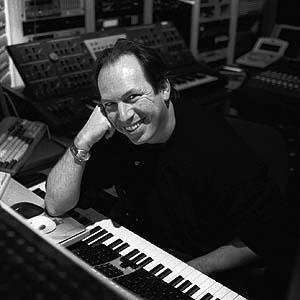 Zimmer spent the early part of his career in the United Kingdom before moving to the United States. He is the head of the film music division at DreamWorks studios, and works with other composers through the company which he founded, Remote Control Productions.

Zimmer's works are notable for integrating electronic music sounds with traditional orchestral arrangements. He has received four Grammy Awards, two Golden Globes, a Classical BRIT Award, and an Academy Award. He was also named on the list of Top 100 Living Geniuses, published by The Daily Telegraph. 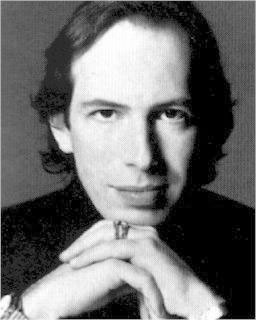 Zimmer was born in Frankfurt am Main, Germany. As a young child, he lived in Königstein-Falkenstein, where he played the piano at home, but had piano lessons only briefly as he disliked the discipline of formal lessons. He moved to London as a teenager, where he attended Hurtwood House school. In an interview with the German television station ZDF in 2006, he commented: "My father died when I was just a child, and I escaped somehow into the music and music has been my best friend." Zimmer began his career playing keyboards and synthesizers. He worked with The Buggles, a New Wave band formed in 1977 with Trevor Horn, Geoff Downes, and Bruce Woolley. Zimmer can be seen briefly in The Buggles' music video for the 1979 song "Video Killed the Radio Star". After working with The Buggles, he started to work for the Italian group Krisma, a New Wave band formed in 1976 with Maurizio Arcieri and Christina Moser. He was a featured synthesist for Krisma’s third album, Cathode Mamma. He has also worked with the band Helden (with Warren Cann from Ultravox). Both Zimmer (on keyboards) and Helden (on drums), were invited to be part of the Spanish group Mecano for a live performance in Segovia (Spain) in 1984. Two songs from this concert were included in the "Mecano: En Concierto" album released in 1985 only in Spain. In 1980 Zimmer co-produced a single, "The History Of The World Part 1," with, and for, UK Punk band The Damned, which was also included on their 1980 LP release, "The Black Album," and carried the description of his efforts as "Over-Produced by Hans Zimmer."

While living in London, Zimmer wrote advertising jingles for Air-Edel Associates. In the 1980s, Zimmer partnered with Stanley Myers, a prolific film composer who wrote the scores for over sixty films. Zimmer and Myers co–founded the London–based Lillie Yard recording studio. Together, Myers and Zimmer worked on fusing the traditional orchestral sound with electronic instruments. Some of the films on which Zimmer and Myers worked are Moonlighting (1982), Success is the Best Revenge (1984), Insignificance (1985), and My Beautiful Launderette (1985). Zimmer's first solo score was Terminal Exposure for director Nico Mastorakis in 1987, for which he also wrote the songs. Zimmer acted as score producer for the 1987 film The Last Emperor, which won the Academy Award for Best Original Score.

One of Zimmer's most durable works from his time in the United Kingdom is the theme song for the television game show Going for Gold, which he composed with Sandy McClelland in 1987. In an interview with the BBC, Zimmer said: "Going For Gold was a lot of fun. It's the sort of stuff you do when you don't have a career yet. God, I just felt so lucky because this thing paid my rent for the longest time."

A turning point in Zimmer's career occurred with the 1988 film Rain Man. Hollywood director Barry Levinson was looking for someone to score Rain Man, and his wife heard the soundtrack CD of the anti-Apartheid drama A World Apart, for which Zimmer had composed the music. Levinson was impressed by Zimmer's work, and hired him to score Rain Man. In the score, Zimmer uses synthesizers (mostly a Fairlight CMI) mixed with steel drums. Zimmer explained that "It was a road movie, and road movies usually have jangly guitars or a bunch of strings. I kept thinking don't be bigger than the characters. Try to keep it contained. The Raymond character doesn't actually know where he is. The world is so different to him. He might as well be on Mars. So, why don't we just invent our own world music for a world that doesn't really exist?". Zimmer’s score for Rain Man was nominated for an Academy Award in 1989, and the film won four Academy Awards including Best Picture.

A year after Rain Man, Zimmer was asked to compose the score for Bruce Beresford's Driving Miss Daisy which, like Rain Man, won an Academy Award for Best Picture. Driving Miss Daisy’s instrumentation consisted entirely of synthesizers and samplers, played by Zimmer. According to an interview with Sound On Sound magazine in 2002, the piano sounds heard within the score come from the Roland MKS–20, a rackmount synthesizer. Zimmer joked: "It didn't sound anything like a piano, but it behaved like a piano."

1991's Thelma & Louise soundtrack by Zimmer featured the trademark slide guitar performance by Pete Haycock on the "Thunderbird" theme in the film. As a teenager, Zimmer was a fan of Haycock, and their collaboration on film scores includes K2 and Drop Zone.

For the 1992 film The Power of One, Zimmer traveled to Africa in order to use African choirs and drums in the recording of the score. On the strength of this work, Disney Animation Studios approached Zimmer to compose the score for the 1994 film The Lion King. This was to be his first score for an animated film. Zimmer said that he had wanted to go to South Africa to record parts of the soundtrack, but was unable to visit the country as he had a police record there "for doing 'subversive' movies" after his work on The Power of One. Disney studio bosses expressed fears that Zimmer would be killed if he went to South Africa, so the recording of the choirs was organized during a visit by Lebo M.[15] Zimmer won numerous awards for his work on The Lion King, including an Academy Award for Best Original Score, a Golden Globe, and two Grammys. In 1997, the score was adapted into a Broadway musical version which won the Tony Award for Best Musical in 1998. In 2003, he also created the score for Spirit: Stallion of the Cimarron, a cartoon movie from DreamWorks Animation.

Zimmer's score for Crimson Tide (1995) won a Grammy Award for the main theme, which makes heavy use of synthesizers in place of traditional orchestral instruments. For The Thin Red Line (1998), Zimmer said that the director Terrence Malick wanted the music before he started filming, so he recorded six and a half hours of music. Zimmer's next project was The Prince of Egypt (1998), which was produced by DreamWorks Animation. He introduced Ofra Haza, an Israeli Yemenite singer, to the directors, and they thought she was so beautiful that they designed one of the characters in the film to look like her. 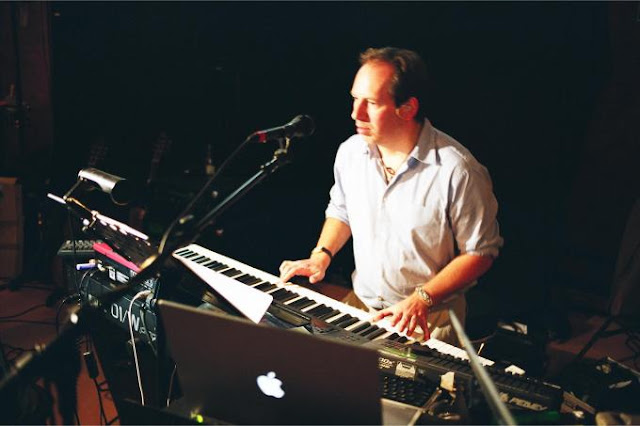 In the 2000s, Zimmer has composed scores for Hollywood blockbuster films including Gladiator (2000), Black Hawk Down (2001), The Last Samurai (2003), The Da Vinci Code (2006) The Simpsons Movie (2007), and Angels and Demons (2009). While writing the score for The Last Samurai, Zimmer felt that his knowledge of Japanese music was extremely limited. He began doing extensive research, but the more he studied, the less he felt he knew. Finally, Zimmer took what he had written to Japan for feedback and was shocked when he was asked how he knew so much about Japanese music.

For the 2009 film Sherlock Holmes, "The Daily Variety" reported that Zimmer purchased an out-of-tune piano for 200 dollars and used it throughout the scoring process because of its "quirkiness".

Zimmer is also noted for his work on the scores of Christopher Nolan's Batman Begins (2005) and The Dark Knight (2008), on which he collaborated with James Newton Howard. The scores for these films were disqualified from receiving Academy Award nominations for Best Original Score due to too many composers being listed on the cue sheet. Zimmer succeeded in reversing the decision not to nominate The Dark Knight in December 2008, arguing that the process of creating a modern film score was collaborative, and that it was important to credit a range of people who had played a part in its production. Zimmer explained his approach to scoring with other musicians in an interview with Soundtrack.net in 2006: "Originally I had this idea that it should be possible to create some kind of community around this kind of work, and I think by muddying the titles - not having "you are the composer, you are the arranger, you are the orchestrator" - it just sort of helped us to work more collaboratively. It wasn't that important to me that I had "score by Hans Zimmer" and took sole credit on these things. It's like Gladiator: I gave Lisa Gerrard the co-credit because, even though she didn't write the main theme, her presence and contributions were very influential. She was more than just a soloist, and this is why I have such a problem with specific credits." 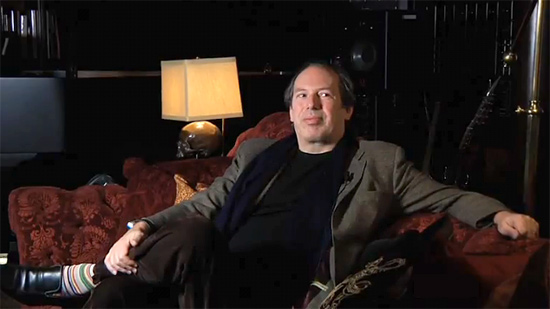 Zimmer is also composing the score for The Dark Knight Rises, the final installment of Christopher Nolan's Batman trilogy. The film is scheduled for release in July 2012.

In October 2000, Zimmer performed live in concert for the first time with an orchestra and choir at the 27th Annual Flanders International Film Festival in Ghent. He has received a range of honors and awards, including the Lifetime Achievement Award in film Composition from the National Board of Review, the Frederick Loewe Award in 2003 at the Palm Springs International Film Festival, ASCAP’s Henry Mancini Award for Lifetime Achievement, and BMI's Richard Kirk Award for lifetime achievement in 1996. Recent work includes the Spanish language film Casi Divas, Sherlock Holmes, The Burning Plain (2009), and Inception (2010). He composed the theme for the television boxing series The Contender, and worked with Lorne Balfe on the music for Call of Duty: Modern Warfare 2, which was his first video game project. Zimmer also collaborated with composers Borislav Slavov and Tilman Sillescu to create the score for the video game Crysis 2.

In December 2010, Zimmer received a star on the Hollywood Walk of Fame. He dedicated the award to his publicist and long term friend Ronni Chasen, who was shot dead in Beverly Hills the previous month.