AT LEAST I TRIED 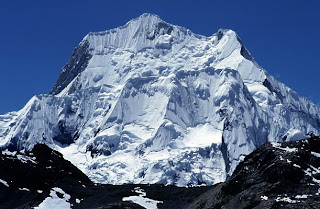 In June 1985, two British mountaineers Joe Simpson and Simon Yates made the first-ever climb of the West Face of the 21,000 foot snow-covered Siula Grande mountain in Peru.

It was an exceptionally tough assault - but nothing compared to what was to come.

Early in the descent, Simpson fell and smashed his right knee. Yates could have abandoned him but managed to find a way of lowering him down the mountain in a series of difficult drops blinded by snow and cold. Then Simpson fell into a crevasse and Yates eventually had no choice but to cut the rope, utterly convinced that his friend was now dead.

In his subsequent book on the climb entitled "Touching The Void", Joe Simpson wrote:

"As I gazed at the distant moraines, I knew that I must at least try. I would probably die out there amid those boulders. The thought didn't alarm me. It seemed reasonable, matter-of-fact. That was how it was. I could aim for something. If I died, well, that wasn't so surprising, but I wouldn't have just waited for it to happen. The horror of dying no longer affected me as it had in the crevasse. I now had the chance to confront it and struggle against it. It wasn't a bleak dark terror any more, just fact, like my broken leg and frostbitten fingers, and I couldn't be afraid of things like that. My leg would hurt when I fell and when I couldn't get up I would die."

The survival of Yates himself was extraordinary. That Simpson somehow found a way of climbing out of the crevasse after 12 hours and then literally crawled and dragged himself six miles back to camp, going three days and nights without food or drink, losing three stone, and contracting ketoacidosis in the process, would be the stuff of heroic fiction if it was not so true. Indeed, six operations and two years later, he was even back climbing. All because, against all the odds, he tried ...

Source: "Touching The Void" by Joe Simpson
--------
http://www.rogerdarlington.co.uk/stories.html#Story36
http://www.edsopinion.com/uploaded_images/sula-744279.jpg
Posted by pratanacoffeetalk at 8:40 AM