STEVE JOBS TOLD TIM COOK NOT TO ASK "WHAT WOULD STEVE DO". 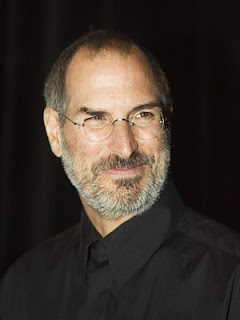 Oct. 25 (Bloomberg) -- When Apple Inc. Chief Executive Officer Tim Cook took the microphone at a memorial tribute to Steve Jobs at the company’s campus last week, he shared a piece of advice Jobs gave him before his death on Oct. 5.

“Among his last advice he had for me, and for all of you, was to never ask what he would do. ‘Just do what’s right,’” Cook said. Jobs wanted Apple to avoid the trap that Walt Disney Co. fell into after the death of its iconic founder, Cook said, where “everyone spent all their time thinking and talking about what Walt would do.”

For Apple, which Jobs co-founded at age 21 and built into the world’s most valuable technology company, that’s easier said than done. The challenge for Cook and his executive team will be to maintain Jobs’s legacy without being hobbled by it, said Jeffrey Sonnenfeld, senior associate dean at the Yale University School of Management.

“You’ve got to be careful you don’t create rituals, which are antithetical to Jobs’s own approach,” Sonnenfeld said. “He was constantly breaking glass and moving forward. Walt Disney was surrounded by a cadre of creative people who were every bit the equal of Jobs’s lieutenants, but they became haunted by the question, ‘What would Walt do?’”

Cook took over as CEO when Jobs resigned in August, and had run day-to-day operations during Jobs’s three medical leaves. Jobs passed away after battling a rare form of pancreatic cancer that was first diagnosed in 2003. Since returning to the company in 1997, Jobs introduced one top-selling product after another, from the first iMac personal computer to the iPod music player, iPhone and iPad tablet, changing the electronics, music, mobile- phone and retail industries along the way.

Walter Isaacson’s 571-page biography of Jobs, which went on sale yesterday, confirms what most people already knew: Jobs was unique. Throughout the book, he alone drives Apple’s business in big and small ways, on everything from what products would be built to which songs would be featured in iTunes TV ads.

Jobs told Isaacson that one of his great hopes was that Apple would remain as innovative and committed to product excellence after his death. During the memorial on Oct. 19, Apple director Al Gore said Jobs had spent years developing processes to ensure a smooth transition.

Still, in the book, there’s no mention of any detailed plan for how Apple will be run in his absence. Jobs’s comments instead suggest some tricky challenges ahead for Cook.

‘Not a Product Person’

Jobs has praise for Cook’s operational expertise, yet he acknowledged that products -- Jobs’s primary focus, above earnings, employee satisfaction or shareholder returns -- aren’t his strong suit, the book says.

“Tim’s not a product person, per se,” Jobs told Isaacson.

That may be balanced out by Jonathan Ive, Apple’s senior vice president of industrial design, who has “more operational power than anyone else at Apple except me,” Jobs told Isaacson. “There’s no one who can tell him what to do, or to butt out. That’s the way I set it up.”

Cook himself is quoted in the book regarding Jobs’s willingness to take risks. Cook doesn’t name examples, though there are many, such as migrating to Intel Corp. chips in its Mac computers, or scrapping the design of the iPhone, causing an expensive delay in its introduction. After his first bout with cancer, Jobs got even bolder, Cook said.

“Even though he was running a large company he kept making bold moves that I don’t think anybody else would have done,” Cook told Isaacson.

Ive, meantime, isn’t just the shy artistic genius he’s often portrayed to be, according to the biography. Instead, Ive seems to covet credit. After picking Jobs up at the airport after his liver transplant surgery in 2009, he says he felt “underappreciated” and “devastated” at articles suggesting Apple couldn’t innovate without Jobs.

On some occasions, Jobs was final arbiter of heated internal rivalries involving Ive. Isaacson says that Ive and hardware chief Jon Rubinstein had disagreements that almost led to blows, including a fray about whether to use pricier polished screws in the handle of the PowerMac G4. Finally, Ive told Jobs, “It’s him or me,” according to Isaacson. Rubinstein disputes that he was pushed out, but did later leave the company.

Even if Apple’s executives work well as a team, it will be difficult to match the decisiveness of the Jobs era. In 2004, he told Businessweek about his decision to build 730,000 iPods for the latter half of the previous year. The consensus among the executives at his weekly Monday morning staff meeting was 450,000.

Isaacson also confirms what many had suspected: that Apple’s board hardly ever challenged Jobs, or at least rarely did so successfully. When he agreed to become Apple’s interim CEO in 1997 after a 12-year hiatus, Jobs insisted that the board backdate his stock options -- and then demanded all the directors resign because he feared they were going to get in his way too often, according to Isaacson.

When Jobs revealed his plan to open retail stores, the board objected, though it soon acquiesced. Although directors Art Levinson and Bill Campbell plead with Jobs to get operated on after he was diagnosed with cancer in 2003, he didn’t do so for nine months.

Apple’s board is unlikely to give Cook or anyone else so much leeway. Jobs’s versatility -- the entrepreneur was expert not only at product development and marketing, but also at operations, legal matters and public relations -- made him uniquely suited to oversee Apple’s soup-to-nuts approach to business.

While most technology companies focus on software or hardware or services, Apple does all three, plus retailing. Jobs kept this complex dance working through a startup-style organizational structure. Apple had no separate business units. All major business decisions were made at his Monday morning meetings.

At one point in his interviews with Jobs, Isaacson tells him that Microsoft Corp. founder Bill Gates had said that only Jobs could make such an integrated approach work. Jobs shot back, “Anyone could make better products that way, not just me.”

When Isaacson asked for an example, Jobs couldn’t think of one immediately. He finally said, “The car companies. Or at least they used to.”

Yale’s Sonnenfeld said he’s concerned about comments Cook made about his intention to carry on Jobs’s vision to “honor his memory.” He should focus instead on following his own path, Sonnenfeld said.