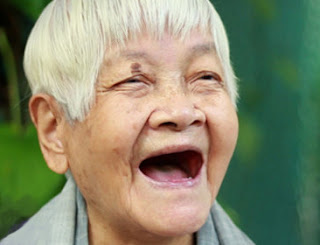 The retired nurse is the founder of the non-profit charities—Heart to Heart Service and the Home for the Aged Sick, one of the first homes for the aged sick in Singapore. She has been a social worker in China and Paraguay and a nurse in England, before coming to Singapore to start similar non-profit charities since 1961. 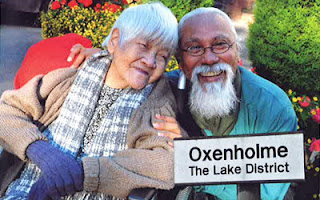 Now a supercentenarian, she is still actively involved in charity work to the present day. She has spent almost all her savings on feeding and housing the poor and the elderly, all of whom are younger than she is, but she herself leads a simple and humble lifestyle.

In 2005, she received the Special Recognition Award from the Singapore government in recognition of her contribution to the country.

At 47, she enrolled and was accepted into in a three-year nursing course in London meant for students under 25.

At 67, she founded one of the first home for the aged sick in Singapore in the 1960s, where she worked until she was 85-years-old.

Her passionate work and active lifestyle has won ex-nurse Teresa Hsu various accolades such as the National Volunteer and Philanthropy Centre's Special Recognition Award (2006) and the Sporting Singapore Inspiration Award for her teaching of yoga (2004).

Singapore's famed 'Mother Teresa' turns 113 this month and her single-minded desire and commitment to help the needy remains as strong as it was years ago.

The actual Mother Teresa, who was born in 1910 and died in 1997, was a Catholic nun of Albanian ethnicity and Indian citizenship, recognised internationally for her ministry to the poor, sick, orphaned and dying. In 1979, she was awarded the Nobel Peace Prize for her humanitarian work. 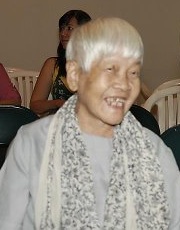 Singapore's supercentenarian spends her days at Heart to Heart, an outreach unit she founded in Hong Kong in 1923. (It was called Friends of the Needy then.)

There, she and co-worker Sharana Rao, 62, look after the needs of 13 single elderly folks and four needy families in Singapore. They provide basic food and money for rent, utilities, travel and companionship.

She also donates money to help in the care of 47 visually-impaired children and teenagers in Ho Chi Minh.

Speaking to Yahoo! Singapore in a coffee shop, the cheerful and humble welfare worker, dressed simply in a batik-styled outfit, reiterates her lifelong goal of caring for the poor and needy.


NOBODY SHOULD EAT GRASS

Hsu, whose authorised biography was published earlier this year, remembers being "very poor and very hungry" when she was seven and had to resort to eating grass.

"As long as it's within my power, I will see that nobody should eat grass. That is my work now, caring for those that do not have the basic needs," pledged the vegetarian, whose favourite treats include vanilla ice cream.

Born in a poor but caring family in Kak Chioh Swatow — a tiny village in the Guangdong province of China — in 1898, Hsu has traveled far and wide helping others and leaving her imprint in countries such as Hong Kong, England and Paraguay, before finally settling down in Singapore.

She shared in her recently-released biography, Heart to Heart with Teresa Hsu, her "wake up call" came in 1933 in Hong Kong, when she came across a beggar asking for food, just as she had attended a lavish company dinner.

Describing the "great pain in my heart" from witnessing the suffering of a fellow human being, Hsu decided, she would donate her money to the less fortunate instead of spending it on herself.

From then, she spent an average of only 30 cents a day for food and drink, giving away the remainder of her money.

But just sharing her money was not enough.

In the 1940s, Hsu, who was in her 40s, joined the Friends Ambulance Unit, where she looked after 20 young men and acted as their translator in China during the Second World War.

After four years, she felt called to study nursing. Against all odds, she boarded a cargo ship headed for England to study at the London Royal Free Hospital. Her determination and desire so impressed the Council, that she was accepted into the three-year course meant only for those aged between 17 to 25.

During the summer breaks, Hsu worked as an exchange volunteer with the International Voluntary Service for Peace in many European countries such as Germany, France, Spain, Switzerland, Norway and Demark.

She later joined the Society of Brothers in Paraguay, a haven for Jewish refugees from Hitler's persecution. She worked in a hospital and her duties included giving medication, injections and attending to women's health problems.

Other than caring for the 2,000 residents in the society's grounds, Hsu would deliver food to lepers living on the outskirts of the town everyday. She also gave out medicine and food, meant for society members, to the poor and sick — a move that often got her into trouble with the Society.

After eight years, she returned to China. In 1961, Hsu moved again, this time with her mother, to Singapore to live with Hsu's elder sister, Ursula Khow. Khow was a school principal in Singapore.

She continued her social work in Singapore, serving first as an unsalaried matron at Kwong Wai Shiu Hospital for about three years before opening an old folks' home in 1965 on a piece of land in Jalan Payoh Lai.

It cost $150,000 and was funded by Khow. Called the "Home for the Aged Sick", it started with just seven elderly residents but quickly expanded to 250.

A volunteer, Lau Tong Ngee, who has known Hsu for more than 38 years, was quoted in her biography describing Hsu's work.

"The Home was accepting more and more residents and she had to hire more workers to help in the work. The workers themselves were all poor. Teresa gave them work and treated the workers and also their families well," he said.

At that time, Hsu was also caring for 26 needy families and single elderly folks through her outreach unit, Heart-to-Heart, he said.

After 20 years at the home, Hsu retired and turned her attention to her welfare service, Heart to Heart, where she still works up till today.

With the help of volunteers who drive her around, she brings necessities to the homes of elderly women and destitutes in their 80s and 90s on public assistance, such as rice, sugar, biscuits, beverages and monthly cash allowances of between S$20 and S$180. She gets her rations and funds from various sources—merchants, people in the neighbourhood, church friends, and their friends. The needy get on Heart-to-Heart's list based on good faith by word of mouth.

In 2000, a Straits Times reader wrote to comment on her selfless contributions to the society and urged the young to follow her example:
"As we admire the grit, good humour and faith that Ms Hsu has, might we also ponder over a certain dilemma: Where are the Teresa Hsus of today? Ms Hsu is at an age where most would have long retired, but she takes it upon herself to be of service to others, to those who are less fortunate than her. A society like Singapore requires a lot more individuals like this and we need them now... We need to have more youths as volunteers or pursuing a career in social work as they will be the core of our society... More publicity and attention must be drawn to volunteer opportunities and more must be done to recognise dedicated people like Ms Hsu. We cannot continue in our efforts of building a gracious society without strengthening volunteerism as a culture. There is little to be gained by being more cultured if we do not take the plight of the less fortunate into consideration".

COMMITTED TO SERVING OTHERS

Currently, she also travels overseas occasionally to share her experiences with others.

Rao, who has known Hsu for nearly 40 years since he first met her when he volunteered at her old folks' home in 1972, described Hsu as a "very loving, hearty and wise soul (with) an enormous amount of compassion and love for the poor and needy".

"Her heart always goes to the poor and suffering," he said. "It's a great blessing and joy to be in her presence and (I'm) always learning from her. (She has) so much experience, wisdom and always sharing her 'hahaha' recipe." (The recipe refers to Hsu's advice to people to lead a happy life.)

After a lifetime of placing the needs of others before herself, is Hsu ever tempted to sit back and enjoy her golden years?

No, she stressed. "No temptation can come into my house. I have work to do, I am not diverted."

She hopes this is a lesson that future generations will learn and remember.
Her message to young people today: "Go all out to help those who don't have the basic needs. See that nobody needs to go hungry."