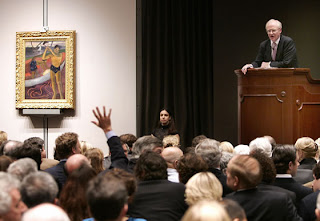 The upstate New York man was rich in almost every way. His estate was worth millions. He owned houses, land antiques and cattle. But though on the outside he had it all, he was very unhappy on the inside. His wife was growing old, and the couple was childless. He had always wanted a little boy to carry on the family legacy.
Miraculously, his wife became pregnant in her later years, and she gave birth to a little boy. The boy was severely handicapped, but the man loved him with his whole heart. When the boy was five, his mom died. The dad drew closer to his special son. At age 13, the boy’s birth defects cost him his life and the father died soon after from a broken heart.
The estate was auctioned before hundreds of bidders. The first item offered was a painting of the boy. No one bid. They waited like vultures for the riches.
Finally, the poor housemaid, who helped raise the boy and loved him, offered $5 for the painting and easily took the bid. To everyone’s shock, the auctioneer ripped a hand written will from the back of the picture.
This is what it said To the person who thinks enough of my son to buy this painting, to this person I give my entire estate.
The auction was over. The greedy crowd walked away in shock and dismay.
-------------
http://pravstalk.com/text-mail-the-auction/
http://dropkicks.co.nz/wp-content/uploads/2008_02/20061109auction.jpg
Posted by pratanacoffeetalk at 3:42 AM