Sir Edmund Hillary was the first man to climb Mount Everest. On May 29, 1953 he scaled the highest mountain then known to man-29,000 feet straight up. He was knighted for his efforts.

He even made American Express card commercials because of it! However, until we read his book, High Adventure, we don’t understand that Hillary had to grow into this success.


You see, in 1952 he attempted to climb Mount Everest, but failed. A few weeks later a group in England asked him to address its members. Hillary walked on stage to a thunderous applause. The audience was recognizing an attempt at greatness, but Edmund Hillary saw himself as a failure. He moved away from the microphone and walked to the edge of the platform.

He made a fist and pointed at a picture of the mountain. He said in a loud voice, Mount Everest, you beat me the first time, but I’ll beat you the next time because you’ve grown all you are going to grow… but I’m still growing! 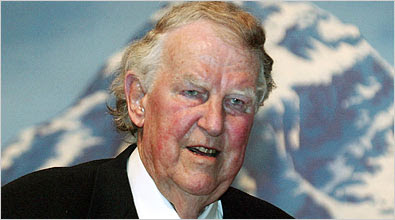 Sir Edmund Hillary, the lanky New Zealand mountaineer and explorer, along with Tenzing Norgay, his Sherpa guide, won worldwide acclaim in 1953 by becoming the first to scale the 29,035-foot summit of Mount Everest, the world’s tallest peak.

In the annals of great heroic exploits, the conquest of Mount Everest by Sir Edmund and Mr. Torgay ranks with the first trek to the South Pole by Roald Amundsen in 1911 and the first nonstop trans-Atlantic flight by Charles A. Lindbergh in 1927.

By 1953, nearly a century after British surveyors had established that the Himalayan peak on the Nepal-Tibet border was the highest point on earth, many climbers considered the mountain all but unconquerable. The summit was 5 ½ vertical miles above sea level (up where today’s jets fly): an otherworldly place of yawning crevasses and 100-mile-an-hour winds, of perpetual cold and air so thin that the human brain and lungs do not function properly. Numerous Everest expeditions had failed, and dozens of experienced mountaineers, including many Sherpas had been killed — buried in avalanches or lost and frozen in sudden storms that roared over the dizzying escarpments.