ROBIN OF BATMAN WILL BECOME SUPERSPY 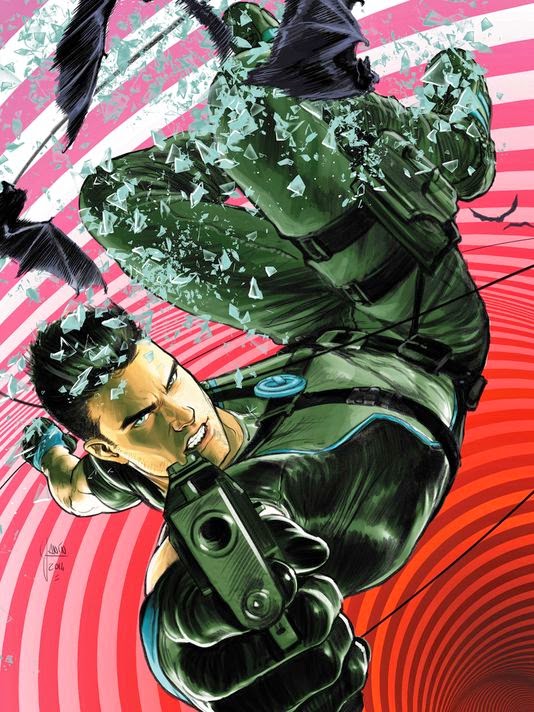 Dick Grayson is trading his superhero suit for secret-agent cool.

Batman's former sidekick embarks on a new life as an undercover superspy in the comic book Grayson, an action-adventure series premiering July 2 from DC Comics. It's written by Tim Seeley (Revival) and Tom King, a former CIA counterterrorism operations officer.

After a career of being overshadowed by his cape-and-cowled father figure, this is a chance for Grayson "to take off the mask and step out on his own in a world where he's not simply being another hero like the hero he grew up with," King says.

A character who first appeared in 1940, Grayson was the original Robin to Bruce Wayne's Dark Knight. He went solo as Nightwing in the 1980s and also served as Batman for a time, when Wayne was thought dead.

The current Nightwing series ends with Issue 30, due May 28. In the current Forever Evil event series, Dick Grayson has been outed in a villain-infested landscape as Nightwing and captured by the Crime Syndicate of Earth 3. (He's also seemingly murdered, but it doesn't take.)

Batman, though, wants him to transition to a different heroic life for the greater good — it's "a hard sell," Seeley says — and tells him why he needs his former partner to stay dead, not only to the world at large but to Batgirl, Alfred Pennyworth and the rest of the "Bat-family."

"Obviously, he's a part of a legacy," Seeley says. "He's been Robin, he's been Batman, and now he's out in the cold by himself."

Adds King: "He's doing something that's going to cause pain to his friends and family, but he believes in the cause. That tension between having to do something good but having the cost of it being pain to his family, it drives him a little crazy."

Grayson's new employer is the international spy agency Spyral, an organization created by writer Grant Morrison for his Batman, Incorporated series. King sees it as representative of today's intelligence community: They're the people who stop bad guys from doing bad things, yet to do that, they employ questionable tactics such as mind erosion.

"He has to save the world, but he's dealing with an organization that may go beyond his comfort zone," King says.

Seeley likes putting Grayson in this strange position, working for a group "that purports to be on the side of the angels, but clearly, there's some weird stuff going in. Their penchant for manipulation instantly makes them nefarious."

King, who started working for the CIA after 9/11, intends to bring to Grayson the emotional feel for what it's like to work undercover, have bullets shot at you and cope with the the inherent pressure of being an intelligence agent.

"It's bliss to serve a higher cause and save people," he says, but "the hard part of it is it's tough to go home and lie to your family and pretend to be a different person."

For the supporting cast, Seeley is planning to reintroduce some familiar DC characters but also to create a new mythos for Grayson, including his own archenemy.

"He's always been a character who hasn't had a villain associated with him," King says. "We want to give him his Lex Luthor, his Joker."

Also, Grayson is one of the few superheroes "who is considered a sex symbol by ladies," Seeley says. "We're leaning into that."

At the very least, he is getting a wardrobe makeover, courtesy of Grayson artist Mikel Janin: Gone is Grayson's mask, and his new outfit reflects the blue-and-black color scheme of his Nightwing togs and features a "G" on his chest, reminiscent of the old "R" from his Robin days.

In terms of tone, Seeley describes Grayson as a "world-hopping" action comic, and King wants every issue to feel like a TV episode of Mad Men or Breaking Bad in that it causes a conversation.

"It's DC's The Americans," King says. "This is something where, at the end of it, you have to go and talk about it."

Posted by pratanacoffeetalk at 8:21 AM