NEXT "THUNDERBOLT" VERSION DOUBLES SPEEDS AND CAN MULTITASK 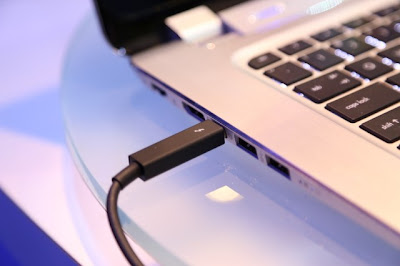 We're not far off from the introduction of Intel's next-generation Haswell processors, but this isn't the only new technology that Intel has in the hopper. In a presentation at this year's National Association of Broadcasters (NAB) Show, the company also took some time to detail upcoming enhancements to its high-speed Thunderbolt interface.

Engadget reports that the next-generation version of the interface, called "Falcon Ridge," is due out in 2014, and it will double the speed of current Thunderbolt controllers—we'd heard rumors about this controller before, but this is our first official confirmation from Intel. The second-generation "Cactus Ridge" controllers were capable of 10Gbps transfer speeds, but Falcon Ridge increases this to 20Gbps. Falcon Ridge also apparently has enough bandwidth to display a 4K image and transfer files at the same time, and it will be backward-compatible with existing cables and devices.

In the meantime, this year's Haswell processors will be paired with another slightly less exciting Thunderbolt update, codenamed "Redwood Ridge." This controller keeps the same 10Gbps speed as Cactus Ridge but consumes a bit less power, supports DisplayPort 1.2, and will reportedly be integrated into some of Haswell's chipsets, obviating the need for a separate controller chip. Intel won't say specifically which Haswell chipsets will and won't feature the integrated controller, but it may be a feature confined to higher-end chipsets, at least initially.

Thunderbolt in its current iteration is already faster than the 5Gbps of USB 3.0, but it has a number of problems that have slowed its adoption: it requires a separate controller chip, its cables are expensive (paying $30 or $40 for a new one is not uncommon), and the standard just hasn't been adopted widely enough to attain critical mass. Beyond Apple's Mac lineup, a handful of PC motherboards and laptops, and some high-end storage accessories, it's still pretty difficult to find, something that may be due to licensing issues as much as cost.

Integration into Intel's chipsets could help spur adoption—without a separate chip, Thunderbolt would both cost less and take less space to integrate. However, unless more peripheral makers get on board, Thunderbolt still just won't be able to do all that much.

Posted by pratanacoffeetalk at 6:51 AM