IS LANCE ARMSTRONG STILL A HERO?

Lance Armstrong lost his 7 Tour de France titles. Is he still a hero?

Unless you've been under a rock lately, you've no doubt heard that Lance Armstrong, the “greatest cyclist who ever lived”, had his seven Tour de France titles stripped from the record book.

He's not just an accomplished athlete – he is the epitome of a survivor. He not only survived testicular cancer, but the cancer that had spread to his brain and lungs, as well. It wasn't until after these life threatening events that he became the champion cyclist we know today.

America loves its athletes. They're viewed as more than heroes. They're placed on a pedestal -- and what a tall pedestal it is! We think of our heroes as winners -- winners who are perfect and can do no wrong. Those in Europe hold a much more realistic view. European sports are a large part of society, and sports are seen as a way to educate and train not only children, but society at large. Winning is important, but the gallant fight against all odds, even when losing, is admired even more.

Doping in the Tour de France has been going on since the first race in 1903. Whether it was alcohol to dull the pain or performance enhancing drug cocktails, the winning riders would often do whatever it took to compete better and last longer. Doping was allowed for the first 60 years of the Tour, and a blind eye was often turned after that. In fact, there is a saying from the early days, which may still hold true: No dope, no hope. By 1930 the use of drugs by Tour de France competitors was so prevalent that when the race opened itself up to national teams, the new rules stated that drugs would not be provided by the race organization -- implying you had to find and pay for your own.

Dr. Pierre Dumas, the first doctor to campaign for drug testing in the Olympics, tells how he entered the room of 1960 Tour champ Gastone Nencini while he lay with tubes in each arm pumping hormones and drugs into his body during the race. He realized that cycling was the epitome of drug fueled results -- professionally done, accepted and necessary to have any chance of winning. Doping in other sports, seemed absolutely amateurish by comparison.

Performance enhancing drugs became illegal in 1965. As time passed, the tests were enhanced and improved, but the Tour was being run by former cycling champions and tour winners. They had legally doped and fully expected others to do so, even if it crossed the line. There are anecdotal reports of positive tests being ignored, while the ability of the riders to beat the tests was aided by the very technology that developed the tests.

From alcohol to ether, from amphetamines to steroids, from the transfusion of red blood cells to EPO to growth hormones, athletes have looked for and found ways to give themselves an edge over the competition. When one thing becomes banned, the search begins for something else that will put them ahead of the pack, especially when they claim everyone does it. 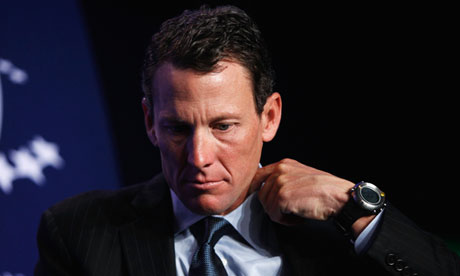 Today the ban, of course, continues, but the practice of trying to beat the tests also continues. During Armstrong's seven winning Tour de France titles, 20 of the 21 podium finishers were linked to doping. Since 1967, a whopping 86 percent of Tour de France winners have been suspected or proven to have doped. Which begs the question: Does a cyclist have to dope in order to win?

What is an athlete to do? Dope and hope to not be discovered? Not dope and not stand a chance of being able to compete with those that do? In Armstrong’s case, he merely took what everybody else was doing and did it better, more systematically and, dare we say, more professionally. He was an American, raised to believe that winning was everything and he took that mindset over to Europe to race -- and win.

Americans treat their sports legends like gods, blindly believing they are perfect. When they fall, we are disgusted -- not only with them but with ourselves for being so gullible. And more often than not we look the other way at bad behavior unless it is crammed down our throats. Then we can turn on them instantly and they become shunned and ridiculed.

Yet, In Armstrong's case, he hasn't simply taken the glory and money gone home. He doesn’t have the sleaze factor typically associated with those who do it for the money and glory alone. He has put his celebrity status to good use. The Lance Armstrong Foundation and Livestrong Challenge have raised more than $470 million to fight cancer on a global level. 81 percent of this amount goes to support programs and survivor services, while 13 percent goes to fundraising and only 5 percent towards administration. A true charity if there ever was one.

Armstrong has been stripped of his seven wins, his name ripped from the history books, his persona the epitome of a cheat. But considering how he used his cycling achievements to raise millions for cancer research -- is he really a total bad guy here? Or is it reasonable to say that, if you raise half a billion dollars to fight cancer and you broke a few rules doing it, the ends justify the means and you're a hero? There is no easy answer.

Posted by pratanacoffeetalk at 2:36 PM