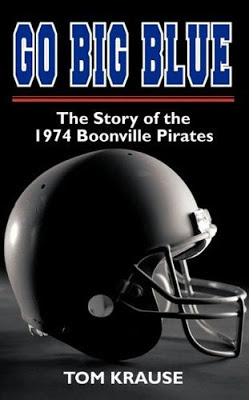 I remember how I felt when the idea hit me, thrilled, certain and Ready!

It was in algebra class, the spring of my junior year. Football season was long over, and a long way away. We had done well last season - qualifying for the playoffs for the first time in school history - and I wanted us to do even better next year, my senior year. But how? Then the idea hit me. I didn't wait till after school. During my lunch break, I drove over to a print shop and ordered business cards with a simple, direct prophesy -

When the cards were printed, my teammates and I distributed them all over town. Teachers pinned them to classroom bulletin boards.
Merchants taped them in store windows. Pretty soon those cards were everywhere. We worked hard at getting the cards all over town. There was no escaping them, and that's what we wanted. We wanted our goal to be right in front of us, for all to see, impossible to overlook, no matter where we went.

Although we faced skepticism, it only served to strengthen our conviction to make our dream a reality. Our school had never won a state title in any sport - we were determined to change that history.

By the time football practice started in late August we were focused. That sense of direction and unity made us a closer team. From day one we gave more in practice, paid more attention to detail as we executed assignments sharply. With our goal imprinted in our minds and hearts -- "BOONVILLE PIRATES -- 1974 STATE CHAMPIONS!", we marched through the season undefeated and stepped into the playoffs with a sense of destiny.

The first playoff game matched us against a powerhouse team that was riding a 28-game winning streak. We knew we were in for a fight, but as the intensity of the game increased, so did our determination. We won, pulling away in the second half. That win brought us to the brink of our goal, a match-up with the defending state champions for the title.

We went into preparing for the big game with the same calm intensity and focus we'd shown as a team all season. Then it started to snow. A huge storm blew through stymieing everyone. School was canceled; roads were closed; transportation systems shut down. Still, somehow every member of the team made it to the school gym and we practiced for the biggest game of our lives in tennis shoes.

Our coach received a phone called before practice the night before the game telling us that state officials were thinking of canceling the game and declaring Co-champions because of the severe weather. We were asked if we would accept such a decision. "No way", was our response. This was our year. We were not going to get this close and not take a shot at the title.

On Saturday, we arrived at the stadium to find the field buried in snow. The goal posts stuck out above a six to eight inch blanket of snow. Someone asked if snowshoes would be allowed as legal equipment. Undaunted we dressed for the game and began our warm-ups.

Frustration grew as both teams struggled to a scoreless first half. Slip, slide, fall down, dropped pass, missed blocks, fumbles were all either team had accomplished. There was a growing sense of urgency that time was running out on out dream.

In the locker room at half-time, Coach Reagan reminded us of all we had been through to get to this moment. Then he reached in his pocket and pulled out the card. Right there in front of us once again was our vision. "Do you want this?", he said.

Playing conditions were as tough the second half as they were the first, but our determination didn't numb out with our fingers and feet. We scored 34 points in the second half on the same field we couldn't score any on in the first half. Our year-long dream became reality:

And yes, I still have my card.

Posted by pratanacoffeetalk at 8:39 AM