FLAXSEED IS GOOD FOR DIABETICS AND CARDIOVASCULAR

While the little "scrubbing bubbles" of dietary fiber from the seed do add bulk and help cleanse the intestines, it also contains lignans and Omega-3. Both of these are important additions for your diet. Manufacturers understand this and you'll begin to notice flax seed in everything from biscuits to bread. That is a good thing, as Martha Stewart would say. It shows that manufacturers are now aware of the public's interest in their health and healthy food options.

The lignans in flaxseed act as antioxidants but also are phytoestrogens. The antioxidant properties of the lignans fight off free radicals that snaps up the cells electrons and cause changes that eventually lead to the cells death. The phytoestrogen in the flaxseeds are plant estrogens. While scientists don't know the exact process, they believe they block the enzymes that trigger hormone metabolism. In some forms of breast cancer higher levels of estrogen stimulates the growth of tumors. The lignan phytoestrogens block the estrogen receptors by binding to them and reducing the potential for the cancer. 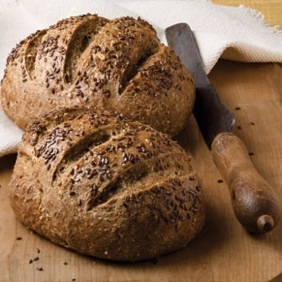 The phytoestrogens also accomplish another feat that affects a great deal of women. It decreases hot flashes. A study published in 2007 showed that a mere 2 tablespoons of flaxseed ground and taken twice a day reduced the hot flashes by over half and when the did occur it also reduced the intensity by over half. It only took one week to achieve results. After two weeks, the women reported the maximum benefit of the seeds.

By now, most people have heard of Omega-3. Flax seeds contain Omega-3 and again, tha
t's another good thing. Omega-3 has many different health benefits. Several studies show that it not only lowers the bad, LDL, cholesterol levels; it also helps to lower blood pressure besides.

Flaxseed studies find that daily consumption may help diabetics control the glucose tolerance and lower blood sugar in type two diabetics. It also has anti-inflammatory properties that help those with Parkinson's, asthma and arthritis. It blocks the pro-inflammatory agents in the body.

Flaxseed is particularly good for those with cardiovascular problems. It plays a role in regulating the heartbeat, reducing the LDL cholesterol levels and preventing plaque from building on the artery walls. Studies show that flaxseed reduces plaque build up by as much as 75 percent.

There is a possibility of too much of a good thing, but it's not easy to do when you use flax seed. When taking flax oil, there are potentials for too much oil that has the potential to cause poisoning. Since the seeds have the extra bulk and fiber, it would be difficult to consume that much. As with all things, however, moderation is always a good idea. Here is the best source for flax oil and where I get almost all of my suppliments

If you decide that flaxseed is a great supplement for your diet, you need to learn a few tips. The first is to grind the seeds. The hard outer shell of the flaxseed prevents any nutrients from escaping and almost defies digestion. Most of the time, it escapes unscathed into the porcelain receptacle. Check on the ingredients when purchasing a product containing flaxseed. Make certain it doesn't contain whole flaxseed but uses ground flaxseed in its production. Grind it up at home and use it liberally. If you add a little ground flaxseed to all your dishes, you'll reap the health benefits of flaxseed.