THE FRENCH STILL FLOCK TO BOOKSTORES 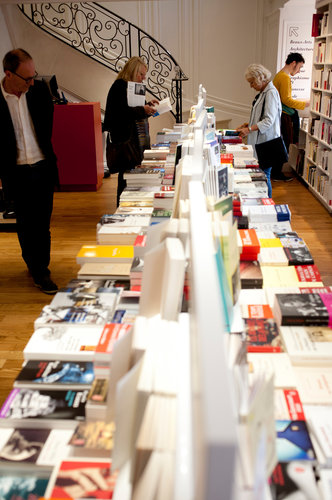 The French, as usual, insist on being different. As independent bookstores crash and burn in the United States and Britain, the book market in France is doing just fine. France boasts 2,500 bookstores, and for every neighborhood bookstore that closes, another seems to open. From 2003 to 2011 book sales in France increased by 6.5 percent.

E-books account for only 1.8 percent of the general consumer publishing market here, compared with 6.4 percent in the United States. The French have a centuries-old reverence for the printed page.

“There are two things you don’t throw out in France — bread and books,” said Bernard Fixot, owner and publisher of XO, a small publishing house dedicated to churning out best sellers. “In Germany the most important creative social status is given to the musician. In Italy it’s the painter. Who’s the most important creator in France? It’s the writer.”


A more compelling reason is the intervention of the state. In the Anglophone book world the free market reigns; here it is trumped by price fixing.

Since 1981 the “Lang law,” named after its promoter, Jack Lang, the culture minister at the time, has fixed prices for French-language books. Booksellers — even Amazon — may not discount books more than 5 percent below the publisher’s list price, although Amazon fought for and won the right to provide free delivery.

Last year as French publishers watched in horror as e-books ate away at the printed book market in the United States, they successfully lobbied the government to fix prices for e-books too. Now publishers themselves decide the price of e-books; any other discounting is forbidden.

There are also government-financed institutions that offer grants and interest-free loans to would-be bookstore owners.

The contrast between the fate of English- and French-language bookstores is playing out in Paris these days.

Next month, after 30 years in business, the leading English-language Paris bookstore will close. For a generation authors like David Sedaris, Susan Sontag, Raymond Carver and Don DeLillo gave talks and readings at the store, the Village Voice, on one of the chicest streets of St.-Germain-des-Prés.

“When Stephen Spender gave a talk, Mary McCarthy was in the audience,” Hazel Rowley wrote in a 2008 essay on the bookstore. “One evening Edmund White introduced Jonathan Raban, with Bruce Chatwin among the audience.” But the Village Voice could not survive the deep discounting of Amazon and sellers of e-books.

The specter of loss hovered over a party there Saturday night, when hundreds of well-wishers crammed into the store and spilled out onto the narrow street to mourn its passing.

“I want you to know what a privilege it was to have you come and sit with me in my dark and cramped little den at the back of the bookshop, to chat, talk about books, about your own work and about life,” said Odile Hellier, the founder and owner. “I will dearly miss those moments and can only hope that there will be another dark little den where I can sit and share ideas, and all the rest.”

It may have to be in a French-language bookstore like L’Usage du Monde across town in the heart of a gentrifying neighborhood of the 17th Arrondissement, which will celebrate its first anniversary in August.

The owners, Katia and Jean-Philippe Pérou, received grants from the National Center of the Book in the Culture Ministry and the Paris regional government and an interest-free loan from a group with the unwieldy name the Association for the Development of the Bookstore of Creation.

“We couldn’t have opened our bookstore without the subsidies we received,” Ms. Pérou said. “And we couldn’t survive now without fixed prices.”

Beneath the surface there are predictions that France is only delaying the inevitable, and that sooner or later market forces will prevail. Despite the appeal of the neighborhood bookstore 13 percent of French books were bought on the Internet in 2011.

An agreement that Google announced this month with the French Publishers Association and the Société des Gens de Lettres, an authors’ group, should allow publishers to offer digital versions of their works for Google to sell. Until now sales of e-books have lagged in France and much of the rest of Europe in part because of disputes over rights.

“We are in a time of exploration, trial and error, experimentation,” Bruno Racine, president of the French national library, wrote in his 2011 book, “Google and the New World.” “Many scenarios are envisioned. The least probable is certainly that of a victorious resistance of the paper book.”

A 59-page study by the Culture Ministry in March made recommendations to delay the decline of print sales, including limiting rent increases for bookstores, emergency funds for booksellers from the book industry and increased cooperation between the industry and government.

“Running a bookstore is a combat sport,” the report concluded.

One tiny operation determined to preserve the printed book is Circul’livre.

On the third Sunday of every month this organization takes over a corner of the Rue des Martyrs south of Montmartre. A small band of retirees classify used books by subject and display them in open crates.

The books are not for sale. Customers just take as many books as they want as long as they adhere to an informal code of honor neither to sell nor destroy their bounty. They are encouraged to drop off their old books, a system that keeps the stock replenished.

“Books are living things,” said Andrée Le Faou, one of the volunteer organizers, as she hawked a three-volume biography of Henri IV. “They need to be respected, to be loved. We are giving them many lives.”