EARLY INSULIN INTAKE MAY PREVENT DIABETES, BUT NOT HEART DISORDERS 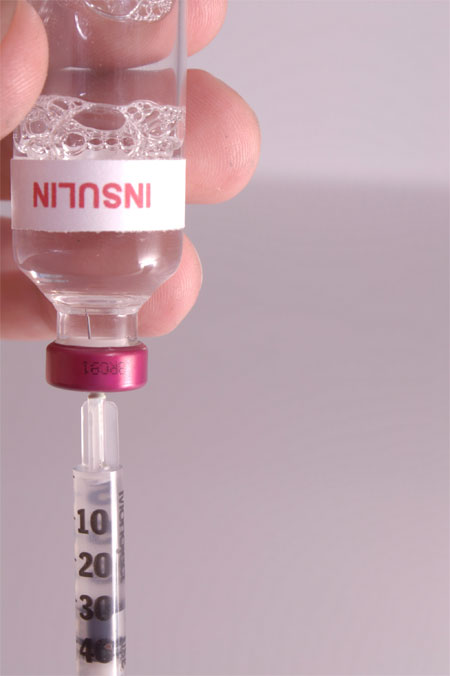 Does long-term intake of a special form of insulin prevent diabetes and heart problems, but cause cancer? The debate has been raging in medical circles for long. Now, an international study involving 12,000 pre-diabetics settles two parts of it, but leaves the other open for further research.

Results of ORIGIN (Outcome Reduction with Initial Glargine Intervention) study presented in the wee hours of Tuesday at the annual meeting of the American Diabetes Association found basal insulin (known by brand name Lantus) or omega-3 fatty acid (fish oil) did not lower risks of cardiovascular disorders, but delayed the onset of diabetes by 31%. The delaying effect, however, remains open to scientific debate as some experts say it could be because of the good sugar control the pre-diabetics had during the study. The researchers debunked fears that the insulin can cause cancer.


The study put to test glargine insulin, a long-acting drug given once a day to help diabetics keep sugar level under control. Unlike normal insulin, glargine has microcrystals that slowly release insulin and hence reduces the risk of low sugar levels. This insulin is nearly three times more expensive than the normal insulin and is used by less than ten percent of insulin users in India. In 2009, a study from Sweden had linked glargine with increased chances of cancer.

The six-year ORIGIN trial involving more than 12,000 early diabetics and pre-diabteics -- including 400 from India - challenged this theory. The study, simultaneously published in New England Journal of Medicine, was sponsored by Sanofi Aventis, one of the largest insulin manufacturers. Nearly half of the patients received insulin glargine or Lantus to achieve normal fasting glucose levels and the others went through standard care, which included insulin towards later part of the study. Prinicipal investigator of the study Dr Hertzel Gerstien, professor of medicine at McMaster's Michael G DeGroote School of Medicine confirmed that the study shows that that long-term use of insulin does not cause heart diseases. The study concluded that the group of people who were given glargine had similar cardiovascular events compared to the group given standard therapy.

Glargine given once a day could maintain normal blood glucose levels for up to 6.5 years without any harmful effects, said Chennai-based diabetologist Dr A Ramachandran, the principal investigator for India. "There was a modest risk of hypoglycemia and increase in body weight in patients who took this insulin when compared to those who did not, but there was no risk of cancer. The study gives doctors confidence to initiate patients with glargine early in the course of diabetes or pre-diabetics without any reservations," Dr Ramachandran said.

The use of basal insulin in pre-diabetes for 6.5 years significantly reduced the incidence of diabetes or prevented onset of diabetes by 31%. While some doctors it was best to start pre-diabetics on insulin to prevent diabetes, others say it wouldn't be wise to conclude the benefits of early introduction of insulin for prevention. Endocrinologist Dr Nihal Thomas of Christian Medical College, who was part of the study, said the group of subjects on glargine was predetermined to have tighter sugar control right from the beginning. "Tighter control of sugar protects beta-cell function and can prevent onset of diabetes. It is not necessarily a glargine-associated phenomenon. It could be due to the fact that they have a tight control of sugar early," he said.

The second part of the study was to test if fish oil capsules (omega 3 fatty acids) could reduce cardiovascular events in diabetics and pre-diabetics. This showed there was no benefit.

by Pushpa Narayan
-------------
http://timesofindia.indiatimes.com/home/science/Early-insulin-intake-may-prevent-diabetes-but-not-heart-disorders-Study/articleshow/14050361.cms
http://www.ukrainebusiness.com.ua/modules/news/images/topics/4e1b90cb-e58f-66e4.jpg
Posted by pratanacoffeetalk at 1:40 PM