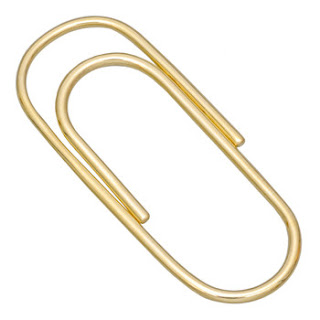 Georgia, a friend of my wife, was recently divorced and trying to raise her two sons when the Gulf War broke out. She heard about soldiers in the service who had no family and needed pen pals. Letters addressed to "Any Soldier" were distributed by commanding officers who noticed any soldiers getting little or no mail. Georgia wrote to 25 such soldiers almost daily, most of them men.

Keeping up with 25 pen pals on a daily basis almost consumed Georgia's time and talents. She sent poems, little stories, and words of hope and encouragement. When there were time constraints, she would write one letter and copy it for everyone. Greetings were sent whenever she knew about a special event, like a birthday.

One day, Georgia received a letter from a soldier that was depressed and discouraged. She pondered as to how she could help lift his spirits. It was then that she noticed that at work there were paper clips of various colors. Georgia took one of the yellow paper clips and photo copied it in the palm of her hand. She sent this picture with the paper clip with the following message: "This yellow paper clip that you see in my hand represents a hug that I am sending to you. You can carry this paper clip in a pocket or anywhere, and whenever you feel down, you can just touch and hold it and know that somebody cares about you, and would give you a hug if she were there." Georgia sent a copy of this picture along with a paper clip and the message to each of her other correspondents.

After the war ended, Georgia received one of the pictures of her hand holding the yellow paper clip, and on the back were over 150 signatures of people that had been given her "hug".

During the years, Georgia named other paper clips. Pink came to mean a kiss, green was for good luck, and so on.

Years later, Georgia was giving a class as part of a seminar for positive thinking. She shared with the members of the class her paper clip symbolism, and made a bracelet of multi-colored paper clips for each of them. One of the women exclaimed "So you're the one!" The class member told Georgia that she was visiting her brother and needed something to hold papers together. She had noticed a yellow paper clip on the refrigerator held there with a magnet. She borrowed the paper clip for her papers. When the brother saw it, he grabbed it and scolded her, and told her never to touch the yellow paper clip again. Now she knew why.

No one will never know how far her message has spread, nor how many lives have been touched by a simple yellow paper clip.