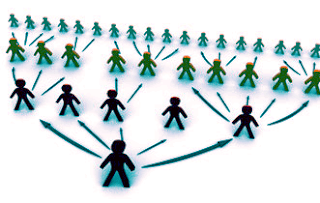 With almost a billion friends on Facebook, six billion cell phone accounts globally, and twenty billion "things" from refrigerators to bridge spans to micro-medical devices soon to be wired by Internet, the digital age is upon us in full force. Everyone and everything is connected or soon will be by social media, on mobile platforms, and in the cloud. That puts vast new arrays of assets in play, from crowds to drones, sensors to shoppers. If teams can leverage those assets, hard and soft, digital and real-world, mass them quickly or marshal them with precision accuracy, teams can gain advantage as never before.


The recent  Kony2012 viral video offers proof that something special is happening as a result of all this connectedness: digital collaboration has come of age. Garnering 100 million YouTube views in six days — the  fastest ever to reach that mark — Kony2012 demonstrated that digital collaboration can create astounding effects not possible just five years ago.

Achieving those effects is  no accident. While much is made of "emergent collaboration," Kony2012 went  viral by design.. The Invisible Children, Inc. team that masterminded the campaign comprised veteran media activists and fundraisers pursuing a common enough goal (a criminal's arrest), but using skills and means unique to the digital age: a viral message, built on a 30-minute video, self-replicating among millions of real-world and online partisans across networks.

Emergent, yes. But no less planned or executed than another viral blockbuster — the OMGPOP team's March 2012 breakout of Draw Something, a Pictionary-like game. Three weeks after launch, gamers, Facebook friends and Twitter followers had downloaded the Draw Something app 35 million times, created over one billion pictures and were creating three thousand drawings per second. Close interplay between social and mobile platforms accelerated the effect. Collaboration between OMGPOP and Couchbase, its database partner, assured it. Teams scaled the cloud implementation to handle the massive load without downtime.  The result: by late March 2012, Draw Something had 15 million daily players and was the Apple AppStore's #1 word game in 84 countries.

Viral-by-design is a unique effect of digital collaboration. The Invisible Children and the OMGPOP teams each achieved it.

Can you? Don't stop at viral-by-design. Today, teams can achieve seven further effects unique to collaboration in the digital age. They are the fuel in the engine of the networked world. Each can confer decisive advantage in the marketplace or the school room, the battlespace or the political race. Each is the new work of teams today.

1. Precision Identity. In the digital world, where you are defines who you are. Everyone has a unique geospatial identity: you and only you were over "there" a minute ago and over "here" now. Competitors know your customers by the stores they visit payday Fridays — and grab their attention and wallet on Thursdays. Strike teams know insurgents by the mud huts they visit, then find and disassemble terrorist networks faster. Precision identity is a capability. Do you have it?

2. Mass Customization. From  Nikes to K-12 curricula, drone strikes to personalized medicines, teams can mass produce unique solutions for anyone. The truly disruptive move in K-12 education, for example, will be personalized curricula uniquely customized student-by-student. Love skateboards? Here's the physics of staying on your deck jumping a 360-degree ollie while riding fakie. Yes, you can download an app for that!

3. Common Operating Pictures. Dozens of systems and networks tell some of the stories about your firm. None tell the whole story. Now you can line them all up, from social media, consumer insights, competitive intelligence, marketplace measurement, sales, and distribution. Share a total view of performance at a single point in time with partners and colleagues so everyone is on the same page. You won't be the first to get this view. Don't be the last.

4. Rapid Innovation/Move-to-Market Cycles. "Collaboration with customers slows me down." Wrong: collaboration with customers speeds your move to market. You avoid rework and get value in the hands of users fast. Just ask Steve Ellis, EVP at Wells Fargo, whose team took Wells's wholesale services online in a year. "Fastest uptake I ever saw," he said. The result: spectacular growth in transactions, from $1 trillion to $11 trillion over a decade.

5. Crowd-Sourced Creation. Whether online (think: Wikipedia) or on the fly (think: Twitter), in design (think: Local Motors' Rally Fighter car) or in finance (think: Kickstarter), millions contributing a little make crowds smarter, richer and happier, faster. Love the crowd; it will love you right back.

6. Real-Time Situational Awareness. What's going on in the factory across the globe, on the store-shelf across town, or with that crowd straight ahead? You can achieve 360/real-time awareness of your situation now, from remote sensing to location awareness. By the way — you already feature in someone else's 360 "SA". But you knew that!

7. Predicting the Future Faster, Sooner. "Big data" analytics with real-world guides let you see big-picture patterns and micro-trends with astonishing precision, in time to seize the day or head off disaster. That knack market leaders have for knowing what will happen next, and when? That's by design.

Transforming effects to results requires strategy, management, and even more collaboration. Barack Obama is President of the United States today because David Plouffe stitched together Obama2008's team of campaign veterans, e-commerce pros, and social media experts. That team achieved all eight digital-age effects, supercharged partisans for age-old purposes — raise money, knock on doors, and get out the vote — and gained victory on November 4, 2008. "The big difference this year is not the technology," Joe Rospars, the campaign's social media chief said. "It's the coordination."

Effects alone never guarantee results. Despite Kony2012, Joseph Kony remains free. But make no mistake. There's plenty of room on history's ash heap for those who assume this all happens by chance.

For teams that can attain these effects by capability — by design — watch out, world.

Zachary Tumin leads the Information and Communications Technology project of Harvard Kennedy School’s Belfer Center for Science and International Affairs. William Bratton is Chairman of Kroll, Inc. They are the authors of Collaborate or Perish! Reaching Across Boundaries in a Networked World. (Random House 2012)

Posted by pratanacoffeetalk at 8:49 AM