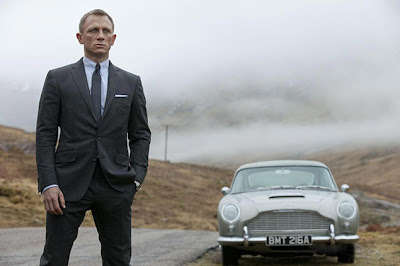 ISTANBUL—The next James Bond movie, "Skyfall," promises the usual action, exotic locations, scheming villains and beautiful women. For fans of the original novels by Ian Fleming, there's more: a journey into the troubled psyche of the iconic spy.

After all, the director of the 23rd film in the franchise, which spans half a century, is Sam Mendes, whose cinematic studies of personalities in emotional turmoil and even meltdown include "American Beauty" and "Revolutionary Road."

"You always go back to the Fleming because the character Fleming created over a number of novels was incredibly complex," Mendes said Sunday at a news conference in Istanbul, where the crew of "Skyfall" has filmed.

"Some people sometimes forget in the cliche of Bond, which is the international playboy, and someone who's always untroubled, and almost never breaks a sweat, that actually what (Fleming) created was a very conflicted character," said Mendes, who was joined by cast members, including Bond actor Daniel Craig.

Fleming created a secret agent who was sometimes frustrated and ambivalent about his job. Many Bond movies sidestepped the inner demons, showcasing instead a debonair 007 whose exploits were enhanced with gaudy gadgets and special effects.

In Fleming's last novels, Mendes said, Bond suffered from a "combination of lassitude, boredom, depression, difficulty with what he's chosen to do for a living, which is to kill. That makes him a much more interesting character, and some of those things are explored in this movie, because Daniel as an actor is capable of exploring them."

Craig reread Bond novels as part of his preparation for "Skyfall," and a delay in film production, caused when studio MGM filed for bankruptcy in 2010, allowed him more time to discuss the character with Mendes.

He said he had spoken to intelligence agents about their work, and has some inkling of the hardships they face.

"I've got the better job," said Craig, whose last movie was "The Girl with the Dragon Tattoo," the thriller adapted from the novel by Stieg Larsson.

"Skyfall" is due for release on Oct. 26 in Britain and in other locations shortly after that. Judi Dench returns as spy chief M and the film introduces English actress Naomie Harris as a field agent named Eve and Berenice Marlohe of France as a character named Severine.
Producers are enigmatic about the plot, though they have said the relationship between Bond and M is tested and MI6, the spy agency, comes under attack.

"Skyfall" includes scenes in London, Scotland, Turkey and China. In Istanbul, the crew filmed scenes with motorcycles at the Grand Bazaar, a covered market that dates to the early Ottoman period. The 1963 Bond movie, "From Russia With Love," included scenes in Istanbul. It starred Sean Connery.

Fleming, whose experiences as a British intelligence officer in World War II helped him conceive the Bond novels, died in 1964.
Some things about the spy's image on screen (as well as in the books) won't change. Asked to describe Bond's love life in "Skyfall," Craig smiled.

"It's very rich," he said. "We're making a Bond movie, so that kind of speaks for itself."