THE LEADER OF "DEATH OF GOD" DIES 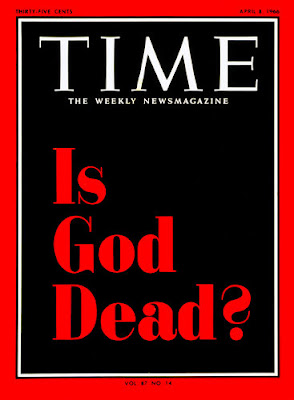 William Hamilton was a tenured professor of church history at a small divinity school in Rochester in April 1966 whenTime magazine created a sensation with a cover article featuring some of the ideas he had been writing about for years in journals read mainly by ministers and theologians.

In large red type against a black background, Time boiled those ideas down to three words: “Is God Dead?” It became one of the magazine’s most famous covers, and it upended Dr. Hamilton’s quiet life as an academic theologian.

The article, appearing in the season of Easter and Passover, gave a primer on the history of the war between religious and secular ideas in Western culture going back to Copernicus. It quoted Billy Graham and Simone de Beauvoir as exemplars of the two sides, and it introduced the world to Dr. Hamilton as the leader of a new school of religious thinking it called the “Death of God Movement.”


Dr. Hamilton became the target of death threats in the year after the article was published. He left his job, feeling ostracized. And he spent a good deal of the rest of his life — he died on Feb. 28 at 87 — adding air quotes with his fingers around the word God, which was what he had meant when he referred to “the death of God,” he said.

But the article was basically accurate about his views. He believed that the concept of God had run its course in human history. Civilization now operated according to secular principles. And churches should, too, by helping people learn to care for one another unconditionally, without illusions about heavenly rewards.

For better or worse, it was not something he would have said out loud at the Third Presbyterian Church in Rochester, where he and his family attended services for many years until he started meeting icy silences after the Time article appeared.

To him it was a scholarly idea, written for scholarly journals, intended to address the big theological question of the postwar era: how to reconcile the notion of an all-powerful God with an overwhelmingly secular and often brutal modern life. The question was being explored from every angle by theologians, who were as likely to quote Camus, Nietzsche and Kierkegaard as the Bible.

The “Death of God” thinking had attracted attention the year before, when Dr. Hamilton and Thomas J. J. Altizer, a religion professor at Emory University in Atlanta, published “Radical Theology and the Death of God,” a collection of their essays.

Reviewing the book for The New York Times, Edward B. Fiske described it as an open challenge to the ideas of Karl Barth, the Swiss theologian whose conservative “neo-Orthodox” ideas had dominated Christian thinking in the 20th century. A Times article reported, “Many theologians who challenge the conclusions of the radical theologies nevertheless admit that they must be taken seriously.”

Time magazine ran an article about the subject on its religion page. But there had been no big stir.

“What does your dad mean, ‘God is dead’?” Dr. Hamilton’s son Donald recalled being asked in the schoolyard in the spring of 1966, when he was 12. “I don’t know” was his reply, he said.

Time’s coverage “was a complete surprise to these guys,” said Terrence W. Tilley, chairman of the theology department at Fordham University, referring to Dr. Hamilton, Dr. Altizer and others identified in the article as members of the “Death of God” group. “Academic theologians, exploring radical ideas in uncharted territory, generally do not expect to see their ideas on the cover of Time magazine.”

Dr. Hamilton contended that many people had misunderstood him. He was not an atheist, he said, in the way that the evolutionary biologist and author Richard Dawkins is. He considered himself a follower of Christ, but whether Jesus was the son of God or not, he said, did not matter so much as whether people followed his teachings.

“The ‘death of God’ is a metaphor,” he told the newspaper The Oregonian in 2007. “We needed to redefine Christianity as a possibility without the presence of God.”

Loretta Lynn, the country music star, would have none of it. She voiced her feelings in the title song of her 1968 album “Who Says God Is Dead!” “That’s stupid and mighty low,” she sang. “I like to meet ’em face to face and tell ’em it’s not so.”

Though Dr. Hamilton held a tenured professorship at Colgate-Rochester Divinity School, the intense displeasure he felt from trustees and fellow faculty members led him to accept a job offer in 1967 from New College, a nontraditional institution in Sarasota, Fla. He was named dean of arts and letters at Portland State University in Oregon in 1970 and taught there until his retirement in 1986. He died of congestive heart failure at his home in Portland, his son Donald said.

Traditionalists dismissed his ideas as blasphemous, and many liberal theologians criticized his work as inconsistent and confusing. How could he say God was dead and call himself a Christian? But some theologians, including Ellen T. Charry of Princeton Theological Seminary, maintain that the call to action inherent in “Death of God” ideas stirred an interest in social justice among liberal Christians and influenced the liberation theology movement of the 1960s and ’70s.

William Hughes Hamilton III was born on March 9, 1924, in Evanston, Ill., one of two children of William Hughes Hamilton II, a windmill engineer, and the former Helen Anderson. He graduated from Oberlin College in Ohio and, after serving in the Navy during World War II, studied at Union Theological Seminary in New York and received his Ph.D. at the University of St. Andrews in Scotland.

Besides his son Donald, he is survived by his wife, the former Mary Jean Golden; two other sons, Ross and Patrick; two daughters, Catherine Passo and Jean Hamilton; and eight grandchildren.

Dr. Hamilton’s later writing remained below the radar of the press, focusing on the presence and absence of God in the works of Herman Melville, Emily Dickinson and Shakespeare. But in the end, he told The Oregonian, he never regretted the hubbub his theological work had caused, however misunderstood his ideas might have been.

“The ‘death of God’ enabled me to understand the world,” he said. “Looking back, I wouldn’t have gone in any other direction. I faced all my worries and questions about death long ago.”