JAMES BOND TURNS 50 THIS YEAR, STILL HAS A LICENSE TO THRILL 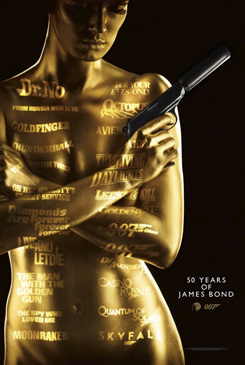 Daniel Craig is back as 007, this time coming to the aid of spy boss M (Judi Dench), whose past returns to haunt her. Accompanying him are two new girls, Eve (Naomie Harris) and Sévérine (Bérénice Marlohe).


The franchise (counting only the 23 Eon Production films) is third in profits behind the Star Wars and Harry Potter series. Since the first 007 film, Dr. No in 1962, Bond films have earned $1.6 billion in North America, according to Box Office Mojo. Star Wars has collected $1.9 billion, and Potter has taken in $2.4 billion.

"There are plenty of imitators, but Bond really is the first one that was an anti-hero," says Skyfall producerMichael Wilson.

Wilson, who has been producing Bond films since 1979'sMoonraker, sees Skyfall as not only marking a half century of a spy rarely shaken or stirred but also bringing the character full circle.

Wilson says Timothy Dalton (two Bonds, 1987-1989) "brought it down to earth" by making a relatable human character. Pierce Brosnan (four Bonds, 1995-2002) "brought a touch of charm and touchiness." (No mention of the ill-fated George Lazenby, Bond only for 1969's On Her Majesty's Secret Service.)

Craig, who is on his third Bond go-around, "is a great actor who takes it back to the Sean days," Wilson says.

Still, in a spy-happy landscape, why does this guy still thrill with a quick quip and a gun clip?

"There's still a touch of sophistication people see in the films besides just action," he says. "Though that's always been an element."

A new element: tough competition from such agents as Jason Bourne, the spy whose franchise has averaged $175 million a film, according to Box Office Mojo. (Bond averages $70 million, though it has been tearing tickets for a half century.)

Wilson enjoys the competition, which he says forces studios and filmmakers to stretch themselves. Skyfall features multiple Oscar winners and nominees, including directorSam Mendes and co-stars Dench, Ralph Fiennes and Javier Bardem.

Besides, Wilson says, friendly counterspying never hurts: "I'm happy for the Bourne success. The worst thing for anyone is a bad movie. You see a good action movie, you're in the mood to see another."