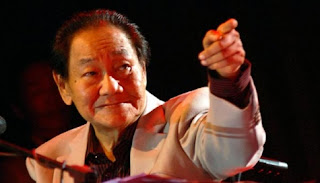 We are saddened to tell you that the legend and our beloved pianist virtuoso Bubi Chen has passed away yesterday, February 16, 2012 at the age of 74, just a couple of minutes before 7:00 pm due to pulmonary complications. We were shocked when we received the news from Bubi’s son, Benny Chen just a while after his passing.

Two years ago his legs developed gangrene caused by the diabetic wound. It made him suffer of massive pain and for that the legs had to be amputated (the first one was on March 26, 2010, just 19 days after his performance at the Java Jazz Festival and the second one a year later). After that he actually showed signs of getting better. The last time we met him at theJazz Traffic Festival in Surabaya where he performed full of joy and looked a lot better.

According to Benny Chen, Bubi Chen started to get breathing problem in his home in Semarang on February 7, 2012, just two days before his 74th birthday. The doctor diagnosed him with pulmonary complications and made him rest. Yesterday afternoon the breathing problem got worse and he was brought to Telogorejo hospital. He got the treatment, but at that time his pulse was already weak. Prof Dr. dr Darmono called his sons and announced his passing just some minutes before 7:00 pm. 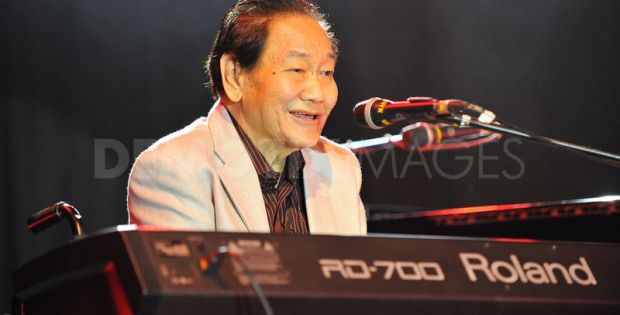 He was still active playing with younger talents until the end, for example at the Jazz Traffic last November he played with Sierra Soetedjo, Sandy Winarta, Doni Sundjoyo, Robert Mulyaraharja and Eugene Bounty. (Read the coverage from that moment here). That’s how Bubi Chen was. His passion in jazz was enormous, his spirit was unbelievable. Sitting behind the piano playing jazz was something that he lived for, that’s where he found most of the joy and happiness. He’s truly an inspiring man, a highly gifted musician, a very friendly man, and we will always remember him for that.

Bubi Chen was born on February 9, 1938 in Surabaya. his father Tan Khing Hoo was a violist. He already started playing piano since he was still five year-old under the guidence of Di Lucia, an Italian-born pianist. From there he learned with Josef Bodmer where he played a lot of classical masterpieces from the likes of Beethoven, Mozart and Chopin. But when it’s about jazz, he was a self-taught. No one knows what got him at that time, but he suddenly played some jazz compositions, even pinned these classical repertoirs into jazz. Not long after that he joined his brothers Jopie and Teddy Chen who at that time had performed around Surabaya and sailed from one achievement to another. The rest is history.

Bubi Chen was called the Art Tatum of the East. It’s not exaggerating to compare him to Tatum, since his fingers can dance unbelievably fast over the keys with excellent precision. You can also listen to his imrpovisation lines which often floated naturally and fell in the right places. whether you like jazz or not, you’ll always be mesmerized by Bubi’s type of play. 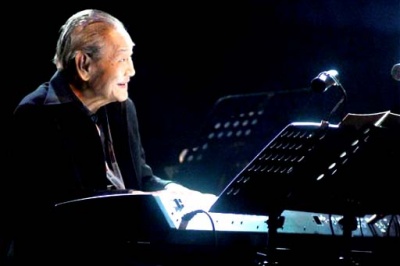 Perhaps one of his most memorable achievement that we have to mention is when he joined the Indonesian All Stars alongside Jack Lesmana, Maryono, Jopie Chen, Benny Mustafa and Kiboud Maulana to perform at the Berlin Jazz Festival in 1967 under the invitation of Joachim-Ernst Berendt. Berendt had heard the amazing skill of both Bubi Chen and Jack Lesmana from American clarinetist Tony Scott. So they went to Berlin and played jaw-dropping modern jazz with some ethnic touches. Getting amazing responses from the German audiences, the group recorded one album there titled “Djanger Bali”, with Tony Scott joined in. This hard to find album was far ahead of time and should stand as one of the most important milestones of Indonesia’s jazz history.

Another thing that we should highlight is, just like Art Tatum he could play just about any kinds of song and pinned them all into new jazz-flavored compositions. In recording Bubi has made more  than 40 jazz albums and beyond with various flavors. He collaborated with traditional musicians and created jazz with ethnical ambience like in the album “Kedamaian” where he brought Uking sukri, Dede Suparman and Endang Sukandar. He played many easy listening albums such as “Bubi chen Plays Soft and Easy”, “Musik Santai” and Nice ‘n Easy series. The ‘lenso-like’ jazz in “Lagu untukmu” and he even released some albums in oriental mood like “Judge Bao” and “Mei Hua San Lung”. Stil while playing these type of songs we could feel some jazz soul inside them. He played in many different sizes of bands, from trio, quartet, quintet to combo and ensemble. He did one amazing duo-piano recital with Singapore’s Jeremy Monteiro in “Jazz the Two of Us”, established Australia-Singapore-Indonesia Connection (A.S.I.C) with Bill Saragih, Jeremy Monteiro, Belinda Moody and Louis Soliano, and recorded the delicious hard bop album “Bubi di Amerika” with John Heard, Albert “Tootie” Heath and Paul Langosh. He collaborated with DBP orchestra led by Mus Mualim in 1969 Irama Records’ “Bila Kuingat”.  He played supporting Margie Segers and Rien Djamain in their early careers, alongside his compatriote Jack Lesmana many times and with hundreds of other artists for more than 50 years. All of these facts show how he embraced all kinds of music while still truly held jazz dearly inside his heart. 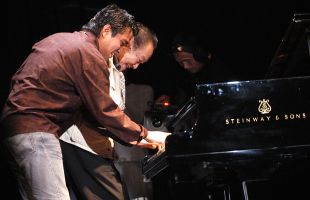 Right on his passing date, 7 years ago he made a very special performance with Indra Lesmana in a spectacular jazz concert called “2 Love Jazz – The Art of Duo”, headlining ’2 Generations, 2 Pianos and One History.’  It was just a month after his brilliant performance at Jazz For Aceh, a charity concert made to help tsunami victims in Aceh.

There are so many memories we share with him. We met him occasionally in several jazz events/festivals. We actually looked forward for the opportunity to meet him again at the upcoming Java Jazz Festival 2012. Indonesia has lost one of its best son, the Surabaya’s jazz icon, the Indonesian jazz legend, one of the brilliant and irreplaceable virtuoso. Tonight we play all his songs in our playlist, praying for him and remembering all his wonderful contributions toward the jazz development of this country.

As his unforgettable cover of “Bluesette” plays on, we pay our respect to him. Rest in peace, uncle Bubi. Keep jazzin’ up in Heaven above. You are not with us anymore, but we will always have you in our hearts. May your music live on forever, and yes, we will carry your legacy. Farewell sir, God bless your soul.