THE ART OF DISTRACTION 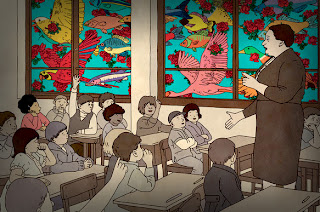 THE other day it occurred to me that I needed more exercise and should take up skipping. I obtained a smart leather rope with weights in the handles and, waiting until it was almost dark, went out into the street. Making sure that no one was coming, I started bouncing on the pavement. I must have skipped a bit as a child, I guess, because I could remember how to do it. Being a determined if not bloody-minded fellow, I improved after a few days; I could go on longer. But that was that: I didn’t do more skips; my knees couldn’t take it, and I soon ran out of breath. Nor could I do the leaps, twirls, step-overs and girly hops I’d seen on the Internet. I repeated the same little leaden jumps over and over. Soon I had to conclude that I’d reached my level. The only way was down.

My 13-year-old son wandered into the street and said he’d like to have a go with the rope. I handed it over, and he began to fling himself in all directions at once, crisscrossing his arms, hopping and tripping from foot to foot while doing a Cossack impression; then he did the whole thing backward, singing a Beatles song. It was moving and educational to be so instructed by one’s son. I hoped an opportunity for retribution would soon present itself.

My son, who can skip and sing, found it difficult, for a long time, to read and write at the level of others his age. At primary school he was castigated, even insulted and punished, for his inability. After experts were called in, he was investigated and berated some more, and finally labeled dyslexic and dyspraxic.

There is, at least, some relief in diagnosis. One is not alone but belongs to a community of others who seem to have a similar condition. But can the inability to do a particular thing be described as a “condition” at all? Would the fact that I can’t do the tango, read music or speak Russian be considered a “condition”? Is it a failure of my development? Am I ill?

I was not much impressed by the imagination and curiosity of the experts: they used an awkward, objectifying language that sounded borrowed rather than earned, and none made the elementary connection between my competence at reading and writing and the boy’s inability, or refusal. And it usually isn’t long, with experts, before they begin to talk, fashionably, about brains and chemicals. Biological determinism is one of psychology’s ugliest evasions, removing the poetic human from any issue.

An appeal to the pseudo-certainties of science might seem finally to settle any question. But this is a moral issue rather than a scientific one; values are at stake here — not facts. It is in the irritating human realm where the interesting difficulties are, and where one might have to really think about and deal with an individual’s history, circumstances and reactions. It is the attempted standardization of a human being and of a notion of achievement that is limiting, prescriptive and bullying.

An 18-year-old acquaintance of one of my older sons mentioned that he’d been given Ritalin by a doctor, with his parents’ consent. He couldn’t concentrate at school; his mind, he said, kept scattering off in different directions. He couldn’t get anything done. He felt he was falling behind in life. And it was depressing him. I said that perhaps the teachers were dull, or that he had other, more pressing things on his mind. But he insisted that the drug focused him. He asked me whether, given the choice, I wouldn’t prefer to focus at will.

This is a good question, and I thought about the virtues of being focused and what could be achieved with the full beam of concentration, within an intense, charmed circle of attention, when the mind, feeling and will are linked. As a teenager, in particular, I wanted to be good at things, to shine, but like the Ritalin boy, I fell badly behind at school, finding myself not only unable to learn but at the bottom of my class. I walked out of secondary school, and a semi-skinhead violent street culture, with three “O” levels, feeling as if I’d been badly beaten for five years. Fortunately I could tell myself it was still the late ’60s, I was a rebel and didn’t fit in — no one with any imagination could.

When I consider that wretched period now, I can see I wasn’t enjoying a creative distraction, a vacation from the drudgery of a bad education, but was enduring a tantrum. Having shut myself off, I was suffering from a form of intellectual anorexia — the refusal to be given anything, to take anything in. As a result of that self-stymieing, I lost hope and believed I’d never catch up or achieve anything. It was a short period in my life, but I haven’t forgotten that early deficit. Sometimes I wonder if I’m still compensating for it.

I still have childhood memories of being humiliated by my father at home in the London suburbs. In India Dad had, apparently, been brilliant at cricket, squash and boxing. As a young man I could never reach his level; nor did we have the facilities or sunshine to help provide the opportunity. Or perhaps Dad made sure I could not keep up with him. Whichever it was, my father mostly wanted to be a writer and, it turned out, he wasn’t great at that. He did not give up, but he was never as good as he wanted to be, and his writing efforts yielded him little satisfaction or self-esteem, particularly as I began to succeed.

It was a relief for me eventually to discover some competence as a writer, though this was later, and it took me a long time to see its value.

When I was failing — and it was very isolating — I envied the love and accolades that the competent and the clever received. I thought that everyone would want such attention and admiration, and that it would lift their spirits. Competence, for me, was even preferable to beauty, since any consideration received was earned and deserved.

For me, now, things do get done; books are finished, and other projects are started that are also finished. They take the time they take, and the breaks are as important as the continuities. Only a fool would think that someone should be able to bear boredom and frustration for long hours at a time and that this would be an achievement.

WHAT I might have said to my son’s friend is that it is incontrovertible that sometimes things get done better when you’re doing something else. If you’re writing and you get stuck, and you then make tea, while waiting for the kettle to boil the chances are good ideas will occur to you. Seeing that a sentence has to have a particular shape can’t be forced; you have to wait for your own judgment to inform you, and it usually does, in time. Some interruptions are worth having if they create a space for something to work in the fertile unconscious. Indeed, some distractions are more than useful; they might be more like realizations and can be as informative and multilayered as dreams. They might be where the excitement is.

You could say that attention needs to be paid to intuition; that one can learn to attend to the hidden self, and there might be something there worth listening to. If the Ritalin boy prefers obedience to creativity, he may be sacrificing his best interests in a way that might infuriate him later. A flighty mind might be going somewhere.

I might have been depressed as a teenager, but I wasn’t beyond enjoying some beautiful distractions. Since my father had parked a large part of his library in my bedroom, when I was bored with studying I would pick up a volume and flip through it until I came upon something that interested me. I ended up finding, more or less randomly, fascinating things while supposedly doing something else. Similarly, while listening to the radio, I became aware of artists and musicians I’d otherwise never have heard of. I had at least learned that if I couldn’t accept education from anyone else, I might just have to feed myself.

From this point of view — that of drift and dream; of looking out for interest; of following this or that because it seems alive — Ritalin and other forms of enforcement and psychological policing are the contemporary equivalent of the old practice of tying up children’s hands in bed, so they won’t touch their genitals. The parent stupefies the child for the parent’s good. There is more to this than keeping out the interesting: there is the fantasy and terror that someone here will become pleasure’s victim, disappearing into a spiral of enjoyment from which he or she will not return.

It is true, however, that many people have spent their lives being distracted, keeping away, often unknowingly, from that which they most want, thus brewing in themselves a poison of disappointment, bitterness and despair. But there are still, as the Ritalin boy seemed to know, forms of distraction that can be far more harmful. We can attack ourselves unknowingly: we might call this corrupted desire, as if we are being inhabited by a demon whose whispers are cruel diminutions of the self, destroying creativity and valuable connections, until enervation and self-hatred make a living death.

It is said that distractions are too easy to come by now that most writers use computers, though it’s just as convenient to flee through the mind’s window into fantasy. In the end, a person requires a method. He must be able to distinguish between creative and destructive distractions by the sort of taste they leave, whether they feel depleting or fulfilling. And this can work only if he is, as much as possible, in good communication with himself — if he is, as it were, on his own side, caring for himself imaginatively, an artist of his own life.

As we as a society become desperate financially, and more regulated and conformist, our ideals of competence become more misleading and cruel, making people feel like losers. There might be more to our distractions than we realized we knew. We might need to be irresponsible. But to follow a distraction requires independence and disobedience; there will be anxiety in not completing something, in looking away, or in not looking where others prefer you to. This may be why most art is either collaborative — the cinema, pop, theater, opera — or is made by individual artists supporting one another in various forms of loose arrangement, where people might find the solidarity and backing they need.