WHAT YOU DO IS WHAT YOU ARE 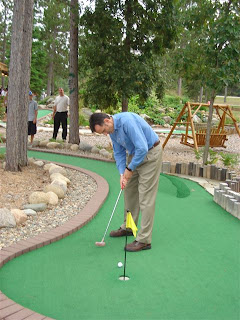 It was a sunny Saturday afternoon in Oklahoma City. My friend and proud father Bobby Lewis was taking his two little boys to play miniature golf. He walked up to the fellow at the ticket counter and said, "How much is it to get in?"

As Ralph Waldo Emerson said, "Who you are speaks so loudly I can't hear what you're saying."
In challenging times when ethics are more important than ever before, make sure you set a good example for everyone you work and live with.
----------
http://www.inspirationalstories.com/1/189.html
http://wildwedge.com/media/content/pawlenty.jpg
Posted by pratanacoffeetalk at 1:18 PM