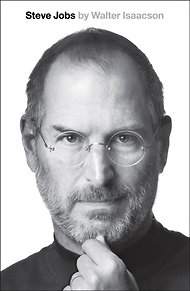 In his last years, Steven P. Jobs veered from exotic diets to cutting-edge treatments as he fought the cancer that ultimately took his life, according to a new biography to be published on Monday.

His early decision to put off surgery and rely instead on fruit juices, acupuncture, herbal remedies and other treatments — some of which he found on the Internet — infuriated and distressed his family, friends and physicians, the book says. From the time of his first diagnosis in October 2003, until he received surgery in July 2004, he kept his condition largely private — secret from Apple employees, executives and shareholders, who were misled.

Although the broad outlines of Mr. Jobs’s struggle with pancreatic cancer are known, the new biography, by Walter Isaacson, offers new insight and details. Friends, family members and physicians spoke to Mr. Isaacson openly about Mr. Jobs’s illness and his shifting strategy for managing it. According to Mr. Isaacson, Mr. Jobs was one of 20 people in the world to have all the genes of his cancer tumor and his normal DNA sequenced. The price tag at the time: $100,000.

But the 630-page biography spans Mr. Jobs’s entire life, and also includes previously unknown details about his romantic life, his marriage, his relationship with his sister and his business dealings. Mr. Isaacson conducted more than 40 interviews over two years with Mr. Jobs, who died on Oct. 5.

A copy of the book was obtained by The New York Times before it officially went on sale.

In October 2003, Mr. Jobs got the news about his cancer, which was detected by a CT scan. One of his first calls, according to the book, was to Larry Brilliant, a physician and epidemiologist, who would later become the head of Google’s philanthropic arm. The men went way back, having first met at an ashram in India.

“Do you still believe in God?” Mr. Jobs asked.

Mr. Brilliant spoke for a while about religion and different paths to belief, and then asked Mr. Jobs what was wrong. “I have cancer,” Mr. Jobs replied.

Mr. Jobs put off surgery for nine months, a fact first reported in 2008 in Fortune magazine.

Friends and family, including his sister, Mona Simpson, urged Mr. Jobs to have surgery and chemotherapy, Mr. Isaacson writes. But Mr. Jobs delayed the medical treatment. His friend and mentor, Andrew Grove, the former head of Intel, who had overcome prostate cancer, told Mr. Jobs that diets and acupuncture were not a cure for his cancer. “I told him he was crazy,” he said.

Art Levinson, a member of Apple’s board and chairman of Genentech, recalled that he pleaded with Mr. Jobs and was frustrated that he could not persuade him to have surgery.

His wife, Laurene Powell, recalled those days, after the cancer diagnosis. “The big thing was that he really was not ready to open his body,” she said. “It’s hard to push someone to do that.” She did try, however, Mr. Isaacson writes. “The body exists to serve the spirit,” she argued.

When he did take the path of surgery and science, Mr. Jobs did so with passion and curiosity, sparing no expense, pushing the frontiers of new treatments. According to Mr. Isaacson, once Mr. Jobs decided on the surgery and medical science, he became an expert — studying, guiding and deciding on each treatment. Mr. Isaacson said Mr. Jobs made the final decision on each new treatment regimen.

The DNA sequencing that Mr. Jobs ultimately went through was done by a collaboration of teams at Stanford, Johns Hopkins, Harvard and the Broad Institute of MIT. The sequencing, Mr. Isaacson writes, allowed doctors to tailor drugs and target them to the defective molecular pathways.

A doctor told Mr. Jobs that the pioneering treatments of the kind he was undergoing would soon make most types of cancer a manageable chronic disease. Later, Mr. Jobs told Mr. Isaacson that he was either going to be one of the first “to outrun a cancer like this” or be among the last “to die from it.”

According to Mr. Isaacson, his interviews with Mr. Jobs were occasionally punctuated by music listening sessions in Mr. Jobs’s living room. During one interview, Mr. Jobs played music from his new iPad 2, cycling through the Beatles, a Gregorian chant performed by Benedictine monks, a Bach fugue and “Catch the Wind” by the Scottish musician Donovan.

Mr. Jobs’s personal affinity for music, and his friendships with musicians, helped him maneuver deals to build the iTunes library and special versions of the iPod. It also moved into his private life at times, Mr. Isaacson writes. After Mr. Jobs learned he had cancer, he exacted a promise from Yo-Yo Ma to play at his funeral.

Mr. Jobs sometimes entertained business guests at his home. Rupert Murdoch, the conservative head of News Corporation, came twice for dinner. Mr. Jobs joked to Mr. Isaacson that he had to hide the kitchen knives from his wife, Laurene Powell, because of her liberal views.

The book provides new details on Apple’s business dealings and rivalries. The author recounts Mr. Jobs getting into a shouting match with co-founders of Google, Larry Page and Sergey Brin, in 2008, over Google’s development of Android software for smartphones, which would compete with Apple’s iPhone.

In romance, Mr. Isaacson writes, Mr. Jobs fell hard, but often made it hard on the women in his life. In 1985, he met and fell in love with a computer consultant, Tina Redse. They lived together on and off for years, and Mr. Jobs proposed in 1989. But she declined, telling friends he would “drive her crazy.”

Later, he met Ms. Powell, a former Goldman Sachs trader who had enrolled at Stanford business school. They fell in love and she moved in with him. But his behavior could be maddening. On the first day of 1990, he proposed, and never mentioned it again for months. In September, exasperated, she moved out. The next month, Mr. Isaacson writes, he gave her a diamond engagement ring, and she moved back in. Eventually they married.

The book also offers some tidbits about Mr. Jobs’s legendary attention to detail, which, according to Mr. Isaacson, extended to a luxury yacht that he began designing in 2009. The design is sleek and minimalist, with 40-foot-long glass walls. It is being built in the Netherlands by the custom yacht firm Feadship, the book says.

Starting last spring, Mr. Jobs met individually or in pairs with people he wanted to see before he died. Bill Gates, co-founder of Microsoft, was one of them. He came to Mr. Jobs’s house in Palo Alto, Calif., in May, and they spent more than three hours together, reminiscing, Mr. Isaacson writes.

By 2011, Mr. Gates, though still Microsoft chairman, had for years focused most of his time on his huge charitable foundation. Mr. Jobs told Mr. Isaacson that Mr. Gates was happier than he had ever seen him.

They talked about the emotional rewards of family life and having children, and the good fortune to have married wisely. Mr. Gates later recalled to Mr. Isaacson the two laughed that Laurene had kept Mr. Jobs “semi-sane” and that Melinda, Mr. Gates’s wife, “kept me semi-sane.”

The book will be published by Simon & Schuster, with a list price of $35.