HERB REED OF VOCAL GROUP THE PLATTERS DIES AT 83 (video) 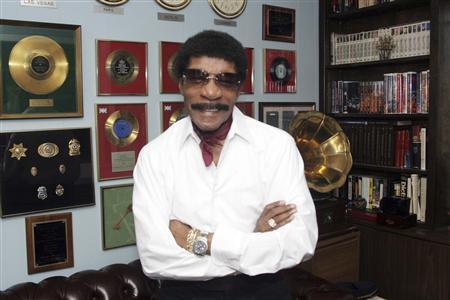 Herb Reed, the last of the founding members of 1950s R&B crooners The Platters, known for hits such as "Smoke Gets in Your Eyes" and "Twilight Time," has died at the age of 83.

Reed's manager said the singer died in Boston on Monday after a period of declining health that included chronic heart disease. Reed had lived in the Boston area for many years, most recently Arlington, Massachusetts.


The Platters, the most popular black singing group of their time, were formed as harmonizing street singers in Los Angeles in 1953 by Reed - who is credited with coming up with the group's name - and four others.

The group, with a lineup that included female vocalist Zola Taylor in addition to Reed, David Lynch, Tony Williams and Paul Robi, went on to have four number-one singles on the U.S. charts between 1955 and 1958 with its soulful pop harmonies.


Two of the Platters' recordings, "The Great Pretender" and "Only You (And You Alone)" are in the Grammy Hall of Fame, which honors recordings of lasting significance.

During the second half of the 1950s the Platters toured the world as "international ambassadors of musical goodwill," a tag created by Mercury, their record label.

The group also appeared in a number of rock'n'roll themed movies, notably 1956's "Rock Around the Clock" featuring Bill Haley and His Comets.

The Platters continued to record until the late 1960s and tour in various incarnations, and with more than 100 different members, until the present day. Reed was the only member of the group to record on all of their nearly 400 recordings.

Reed grew up in poverty in Kansas City, Missouri. "I was poor, and I'm not ashamed to share those stories now," Reed said in a recent interview. "I was so hungry I couldn't think."

When he struck out for Los Angeles at age 15, Reed had three dollars in his pocket and just the clothes on his back. Before getting into the music scene he worked at a car wash for $20 a week and at various odd jobs.

In recent years Reed, the Platters' bass singer, waged a long and ultimately successful battle in federal court to obtain superior rights to the name The Platters.

As the last surviving member of the original group, that made the singer the sole heir to the group's legacy - shutting out many "great pretenders" in the process.

"It's not right to have someone steal your name. It's just not right. We were cheated back then, but that's how things were done," Reed said in early 2012. "It's theft, and I have to fight it so that no other artist faces this."

"He joked that he was going to have the judge's decision framed and hung up along the gold and platinum records that line the walls of his home," Balboni said.

Reed's early struggles informed his later actions. When other members of the group received their first big royalty checks, they splurged on cars and nights out; Reed bought a house in Los Angeles.

"I never wanted to assume we'd keep getting checks," he told his biographer earlier this year.

The Platters, praised for their smooth, stylized renditions of pop standards, were inducted into the Rock and Roll Hall of Fame in 1990.

"They are fondly remembered as a throwback to a golden era when pop, rhythm and blues and rock and roll flowed together in perfect harmony," the Platters' Hall of Fame citation said.

Reed outlived his siblings and is survived by a son, Herbert Jr, and three grandsons. Funeral arrangements were pending.