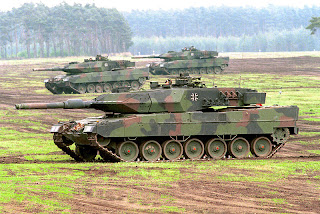 The Leopard 2 is a German main battle tank (Kampfpanzer) developed by Krauss-Maffei in the early 1970s and first entering service in 1979. The Leopard 2 replaced the earlier Leopard 1 as the main battle tank of the German Army. Various versions have served in the armed forces of Germany and twelve other European countries, as well as several non-European nations. More than 3,480 Leopard 2s have been manufactured. The Leopard 2 first saw combat in Kosovo with the German Army and has also seen action in Afghanistan with the Danish and Canadian ISAF forces.


There are two main development batches of the tank, the original models up to Leopard 2A4 which have vertically-faced turret armour, and the "improved" batch, namely the Leopard 2A5 and newer versions, which have angled arrow-shaped turret appliqué armour together with a number of other improvements. All models feature digital fire control systems with laser rangefinders, a fully stabilized main gun and coaxial machine gun, and advanced night vision and sighting equipment (first vehicles used a low-light level TV system or LLLTV; thermal imaging was introduced later on). The tank has the ability to engage moving targets while moving over rough terrain. 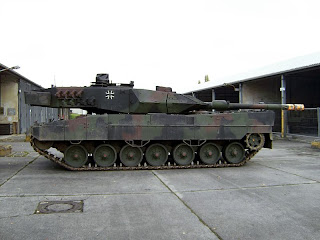 All Leopard 2 variants after the Leopard 2A6 include spall liners on the inside of the tank, protecting the crew. The Leopard 2A6M CAN increases protection against rocket-propelled grenades (RPG's) by including additional slat armour which serves to prematurely detonate such warheads harmlessly against the hull.

Two groups of 4 Wegmann 76 mm smoke mortars are mounted on either side of the turret and can be electrically fired either as single rounds or in salvos of four are mounted on most Leopard 2 models, with the exception of Dutch Leopard 2's, which are instead equipped with a Dutch-designed smoke mortar system with six barrels on each side. Swedish Leopard 2's utilize French GALIX smoke dispensers, similar to the system found on the French Leclerc.

The crew is also protected against Nuclear, Biological and Chemical (NBC) threats as well, as the Leopard 2 is equipped with a NBC overpressurization system which provides up to 4 mbar (0.004 kp/cm²) over pressure inside the vehicle.[6]

The Leopard 2 is equipped with a fire protection system as well. Four 9 kg Halon fire extinguisher bottles are installed on the right behind the driver's station. The bottles are connected to pipes and hoses and are activated automatically by the fire detection system, when temperatures rise above 180 °F inside the fighting compartment, or manually via a control panel in the driver's compartment. An extra 2.5 kg Halon fire extinguisher is also stored on the floor beneath the main gun. 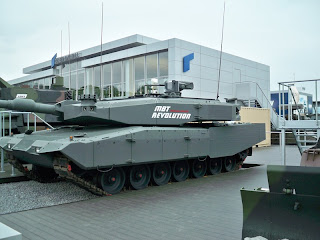 The primary armament for production versions of the Leopard 2 is the Rheinmetall 120 mm smoothbore gun, in either the L44 variant (found on all production Leopard 2's until the A5), or the L55 variant (as found on the Leopard 2A6 and subsequent models). 27 rounds of the main gun ammunition are stored in a special magazine in the forward section of the hull, to the left of the driver's station, with an additional 15 rounds stored in the left side of the turret bustle, and separated from the fighting compartment by an electrically operated door. If the ammunition storage area is hit, blow-off panels in the turret roof would direct any explosion upwards away from the crew compartment. The gun is fully stabilized, and can fire a variety of types of rounds, such as the German DM-33 APFSDS-T anti-tank round, which is said to be able to penetrate 560 millimeters (22 in) of steel armor at a range of 2,000 meters (2,200 yd), and the German DM12 multipurpose anti-tank projectile (MPAT). For the L55 gun, a newer APFSDS-T round was introduced to take advantage of the longer barrel, the DM-53, which is said to be able to penetrate in excess of 810 mm of RHAe armor at a range of 2,000 meters. The bore evacuator and the gun's thermal sleeve, designed to regulate the temperature of the barrel, are fabricated out of glass-reinforced plastic, while the barrel has a chrome lining to increase barrel life. The main gun is capable of power elevating from +20° to -9°.

Rheinmetall has developed an upgrade for Leopard 2 tanks to give them the ability to fire the LAHAT anti-tank guided missile through the main gun, the missile can engage targets out to a range of 6,000 metres (20,000 ft). 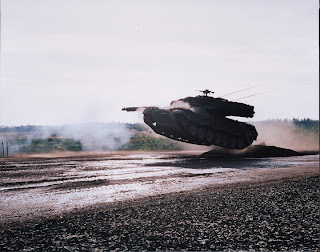 The standard fire control system found on the Leopard 2 is the German EMES 15 fire control system with a dual magnification stabilized primary sight. The primary sight has an integrated Neodymium Yttrium Aluminium Garnet (Nd:YAG) solid state laser rangefinder and a 120 element cadmium mercury telluride, CdHgTe (also known as CMT) Zeiss thermal sight which are both linked to the tank's fire control computer. A backup 8x auxiliary telescope FERO-Z18 is mounted coaxially for the gunner. The commander has an independent periscope, the Rheinmetall/Zeiss PERI-R 17 A2. The PERI-R 17 A2 is a stabilised panoramic periscope sight designed for day / night observation and target identification, and it provides an all round view with a traverse of 360°. The thermal image from the commander's periscope is displayed on a monitor inside the tank. Initial production tanks were not equipped with a thermal sight, due to the sight being not ready, and instead temporarily substituted the PZB 200 low light TV system (LLLTV).

The fire control suite is capable of providing up to three range values in four seconds. The range data is transmitted to the fire control computer and is used to calculate the firing solution. Also, because the laser rangefinder is integrated into the gunner's primary sight, the gunner is able to read the digital range measurement directly. The maximum range of the laser rangefinder is just less than 10,000 m with a measuring accuracy to within 20 m at this range. The combined system allows the Leopard 2 to engage moving targets at ranges of up to 5,000 meters whilst itself being on the move over rough terrain. 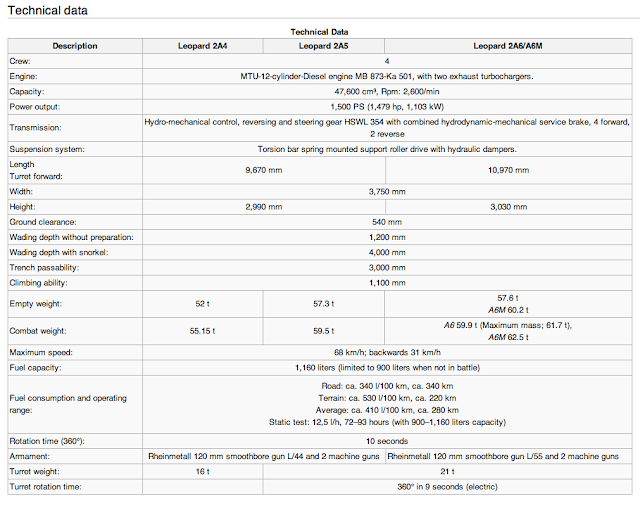 In October 2003, Canada was planning to replace its Leopard C2s with wheeled Stryker Mobile Gun Systems. However, operational experience in Afghanistan, and in particular during Operation Medusa, convinced the Canadian military of the usefulness of maintaining a tank fleet. Leopard C2s were deployed to Kandahar in December 2006, but they were by then almost 30 years old, and were nearing the end of their operational life. The Canadian government decided to borrow 20 Leopard 2A6s and three armoured recovery vehicles from Germany for rapid deployment to Afghanistan. In late August 2007, the first Leopard 2s were airlifted into Afghanistan to equip the Lord Strathcona's Horse (Royal Canadians). 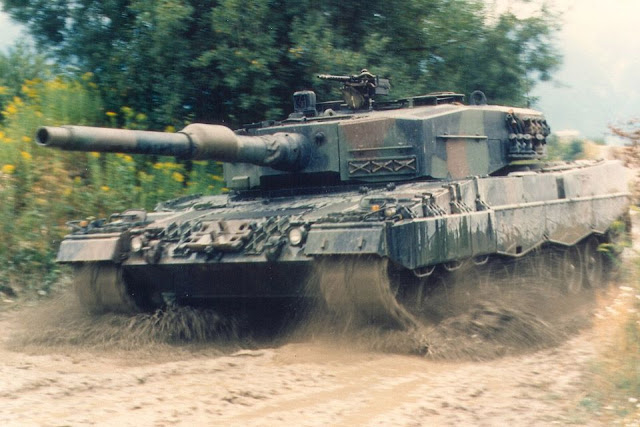 In an assault on November 2, 2007, a Leo 2A6M hit an IED and survived without casualties: “My crew stumbled upon an IED (improvised explosive device) and made history as the first (crew) to test the (Leopard 2A6) M-packet. It worked as it should.” wrote a Canadian officer in an email to German defence officials. Canadian Chief of the Defence Staff General Rick Hillier denied reports that a Leopard II tank that was struck by an IED was a write-off, insisting that the tank has been repaired and is once again in use. “The Taliban have been engaged with some of the new Leopard II tanks in several ambushes” and that as a result the Taliban “learned some very harsh lessons” and lost the battle in question “very quickly and very violently.”

In October 2007, Denmark also deployed its Leopard 2A5 DKs in support of operations in southern Afghanistan. The Danish tank unit, drawn from the first battalion of the Jydske Dragonregiment (Jutland Dragoons Regiment), was equipped with three tanks and one M113 armoured personnel carrier, with an armoured recovery vehicle and another tank kept in reserve. The Danish version of the Leopard 2A5 is fitted with Swedish-made Barracuda camouflage mats, that serve to limit the absorption of solar heat, thus reducing infrared signature and interior temperature. It also has a conventional driver's seat bolted on the floor of the tank, wherereas in the Canadian 2A6M (as part of the mine-protection package) the driver's seat has been replaced by a "Dynamic Safety Seat", which is a parachute-harness like arrangement that the driver wears around his hip. 6 large belts hold him in the right position. In this way, the driver does not have any contact with the hull except on the pedals and is out of the shockwave area of exploding land mines or IEDs.

In January 2008, Danish tanks halted a flanking maneuver by Taliban forces near the Helmand River by providing gunfire in support of Danish and British infantry from elevated positions. On 26 February 2008, a Danish Leopard 2 was hit by an explosive device, damaging one track. No one was injured and the tank returned to camp on its own for repairs. The first fatality suffered by a crew operating a Leopard 2 happened on 25 July 2008. A Danish Leopard 2A5 hit an IED in Helmand Province. The vehicle was able to continue 200 metres (656 ft) before it halted. Three members of the four-man crew were able to escape even though wounded, but the driver was stuck inside. On site treatment by Danish medics could not save him. The vehicle was towed to FOB Attal and then later to FOB Armadillo for investigation and possible redeployment. During the same contact with Taliban forces, a second tank was caught in an explosion but none of the crew were wounded.[27] Beginning on December 7, 2008, Leopard 2 tanks took part in Operation Red Dagger, firing 31 rounds in support of Coalition troops as they recaptured Nad Ali District. A press release from the British ministry of defence claimed the tanks were a decisive factor in the Coalitions success, and praised the accuracy of their fire and their mobility.