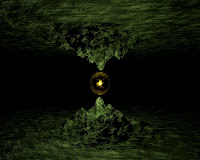 A place. Human cannot even imagine. In like a dream, but real.

Dark. Darker than any darkness. A pitch dark.

The realm of death.

"Has escaped. Too strong. Never seen anything like this before".

"How come? We are strong and powerful".

"But not this time, master".

"Once, there was one who escaped, but we will reclaim him back".

"Right, but I don't think this time we can reclaim back, master".

"The one is different. He is not like the others".

"At first, we had no problem.  We just kept him in the abyss and just like the rest of the others. Just like what we do everyday, many times, in fact millions of times".
(pause)
"Nothing special at the first place. We thought we win. But .....".

"Day one, nothing happened. Day two, things happened just like usual. Normal. We were under control. but day three ...".

"What happened at day three?".

"It was a blinding light!!". (tremble) "Never seen anything like that before!!".

"A rescue team from above?".

"He became the light!!!". (scary) "He is the light. We never saw any bright light like that before since we work for you. The whole place was bright like the sun appear in our realm".

"He walked away. Walked out. Escape, master". (scary)

"Just like that?? And none of you tried to hold him back?".

"Did you send our Pursuit Team to reclaim him back?".

"He has something which is the opposite of us. Something more powerful than us, master". (in fear)

"No. He just not has something. He is that something".

"DEFINE SOMETHING!!! PLEASE, ANYBODY DEFINE IT FOR ME!!".

"Only for two days, we enjoyed our victory over him. Now we are defeated. Badly. Now the whole universe is laughing at us". (pause) "I wonder who is the subject of his love?".

"Mankind, master. His subject for his love is mankind".