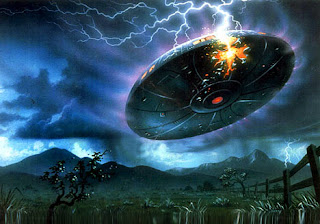 That British authorities were mobilized in 1967 because they feared a possible alien invasion may seem rather quaint today but my initial mockery upon reading that news turned into nostalgia when it dawned on me that we are no longer in awe of anything.

UFO buffs have been poring over the secret UFO files ever since they were released by British authorities and posted on the National Archives site last year. They are a treasure trove of information concerning sightings which were investigated by British intelligence, military and police forces over many years and 35 more have just been released says The Telegraph today.
The paper related a few of those sightings. One of them involves the sighting of six "flying saucers" which were reported and found by members of the public. A preliminary finding was that they were found to be situated in places all across southern England - from the Isle of Sheppey to the Bristol Channel - which were all in a perfectly straight line on the map. Four police forces and a bomb disposal team promptly swung into action amid fears that an salsien invasion may have been underfoot. But their fears proved to be groundless after it was discovered that the whole thing had been an elaborate hoax organized by a group of engineering students. 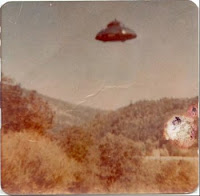 Other sightings included those of 15 unidentified planes which were detected by radar in 2001, a UFO report on 9/11, an "alien abduction" in London, an unidentified plane which followed a Lancaster bomber, and a man who believed he may have been abducted by aliens after seeing an unusual aircraft one evening and experiencing a period of "missing time".

The files also relate how the sightings were taken so seriously by world governments at that time that they were discussed at the UN and the CIA. They were also debated in the House of Lords.

After I had finished reading the article I chuckled for a moment and then noticed that the page contained links to a stack of other UFO articles that The Telegraph - that sanctuary of stiff-upper-lip Britishness - has posted recently, including one about a British Tornado jet flying over the North Sea which reported a UFO "as big as a C130 Hercules plane."

Now I wouldn't trust a report of a UFO sighting as far as I could throw it and never have, but still, something stirred in me and I had a look around the Internet and found that UFO sightings and related blogs and sites are to be found in numbers. Some of them are very impressive too, like the very slick-looking Alien-UFO-Research site, which has a lot of news categories and a lot of content, or crowdedskies. 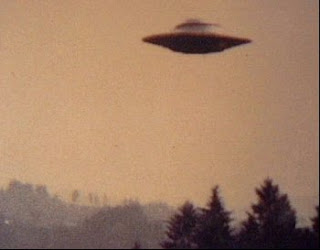 A lot of people have put a lot of work into it all, and that's not counting all the contributors and others who file reports. It's a whole world of its own, it is just out there doing its thing, and it wouldn't hurt a fly. There are of course the usual conspiracists and other rather zany and off-the-wall elements but they aren't doing anyone any harm at the end of the day. They are imagining all kinds of possibilities and dreaming their dreams of other beings from other worlds, that's all.

Meanwhile, many of the rest of us 'know' they don't exist. No hard evidence has ever been found of one, and those pretty UFO landing imprints in cornfields were of course all a hoax. But now we can't imagine that possibility any more there's only reality left.

The problem with reality however is that it can be stultifyingly boring and we need sensations and news now this minute, and if we don't get it we feel withdrawal symptoms. Even the two major WikiLeaks releases, the War Files and the Cable Files, bored us all after a couple of weeks (when did you last go see them?)

Our governments are spineless, our business leaders are criminals, we are no longer dupe, the press is a pack of lies, money is immoral and believing in anything is a sign of naivety at best and the onset of mental illness at worst. 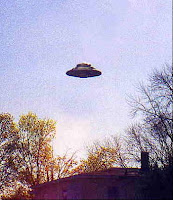 But where have our dreams gone? The hopes? The fears? The unknowns we can't fathom? The enigmas? Where is that "what if" element to our lives, the ironic comfort we used to take from knowing we didn't know everything, the incertitude concerning tomorrow? Life has all become so predictable in our modern mindset and although we all may disagree on important world events we agree that no change will be big enough to threaten our existences.

I wish I could wake up tomorrow to learn that a UFO, a real one this time, landed on the White House lawns bringing a message of peace from some far-flung corner of the cosmos, or that a whole village full of people just disappeared for a week after a UFO sighting only to return none the worse but with mysteries remaining, or that dramatic evidence emerged which proved that Roswell was true all along.

Anything, as long as it shakes us out of this numbingly knowledgeable humdrum and helps us to rediscover what it is to dream and wonder.
-----------------
Source: http://www.digitaljournal.com/article/304251
Illustration: http://www.allnewsweb.com/images/UFOCRASH.jpg
Photos: http://www.alienandufopictures.com/ufo_pictures.html
-----------------
I, Joseph Pratana, personally doesn’t believe the existence of the outer space alien beings. The posting of this article in Pratana Coffee Talk is merely just for fun.
Posted by pratanacoffeetalk at 2:00 AM