BEIJING FROM THE SKY (video) 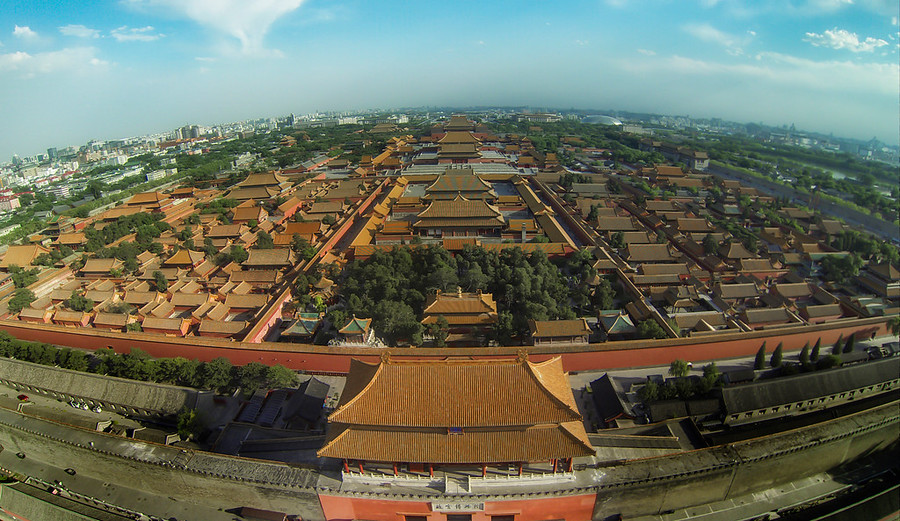 Before I tell you the story of being detained by the Chinese (and, like Taborlin the Great, I similarly did not have key, coin, or candle), I’ll share the video I made! I would have gotten even more footage had the quadcopter not been, ahem, confiscated… BTW, I recommend running the video in HD mode with earphones!

This was made with a really awesome quadcopter â€” the New DJI Phantom 2 with Zenmuse H3-3d 3-axis Gimbal and Gopro Hero 3+ Black Edition. All the footage was shot with that GoPro. I did a mixture of wide angle and narrow shots. I also had it in a mode that automatically took a photo every 5 seconds, and I put some of my favorite photos at the bottom of this blog post!

That music is by the great Jon Hopkins. The name of the track, fittingly, is “A Drifting Up.” Thanks to Chris Craker for the introduction.

THE DETENTION FACILITY AND QUADCOPTER CONFISCATION

So, I went into this not knowing what was legal and what was not legal. Okay, I had a sinking feeling that flying a quadcopter over the Forbidden City might be more black than grey, but my intentions were pure and artistic, so I figured that gave me some sort of leeway. At least, this is how I justified everything in my head beforehand. You’re starting to see how I make bad decisions.

Let me set the stage here. Beijing is the seat of all Chinese government power. So, deciding to fly a drone over China is kind of like Luke Skywalker deciding to ride his landspeeder on the Death Star.

There are multiple “rings” that encircle Beijing. The first ring is the Forbidden City. The second ring has many monuments and other houses of government. It’s kind of like Washington D.C., except with less communists.

I had flown the DJI Quadcopter for about five days with no problem. I was there with my friend Tom Anderson who also had the same DJI Quadcopter setup as I did. We were both having a great time and getting some really cool shots. I am so excited to take photos and experiment with this thing! We had even flown it several times around police in various places. They never said anything. The police were probably generally confused; their lack of interference only emboldened us.

Note To Future Self: Do Not Fly Quadcopter Over The Chinese NSA Intelligence Buildings

So here comes the juicy bit. Well, it could have been worse. But I was certainly at fault!

I was at Beihai Park. Now, some of you may already be rolling your eyes, because you know what I did not know. That behind those trees there are all their government buildings, where they would rather not have things flown above.

My DJI remote control was low on batteries, and I have this rather sane fear of the controller going dead while quadcopter is off having a party somewhere without me. So I set the quadcopter on the ground beside my assistant. My assistant is this 28-year-old female who was kind of cute and quite bubbly named Ady. I say this because it comes into play later in the story. One other thing I can tell you about her is that she was absolutely zero help in warning me that I was about to fly the quadcopter over the Chinese NSA and FBI buildings. That’s one of those things I would have liked to know… My plan was to take an aerial shot of the White Dagoba on Qionghua Island (which you can see from the ground level here).

Anyway, I went out to get my batteries and walked back. I saw Ady still standing by my quadcopter with a rather surly-looking female police officer. I was getting a bad vibe. As I approached, the surliness seemed to increase, and it was really harshin’ my mellow.

Off To The Lockdown

I approached and planned on using my charm offensive. It’s the only strategy I have, so I hoped it would work. One unforeseen fault in my plan is that this policewoman did not speak English.

But Ady spoke both languages, so we began a brief frenzy of back-and-forth, all of which went nowhere fast. We were then escorted to the nearby police area. My friend Tom was standing nearby. But not that near. Actually, he was off in the bushes by the lake, peering at us from afar through multiple tiers of shrubbery.

We were escorted inside a series of secure doors, and the last of which made that CLA-CHUNK-CLINK sound effect that you hear in movies and TV shows. It really made that sound.

There were more enforcement officers inside. I figured I had a lot of ‘splainin to do. And I did!

I had a feeling that I was in a rather sensitive area that I did not know about. So I was sure I had indeed done something wrong, but I just didn’t know what. Thank mao I wasn’t actually flying the thing and it was sitting inert on the ground when security descended. This helped.

Now, this small little detention facility did not have a lot of lights. It was dimly lit, flickering in a sickly yellowish light, and I could not quite see everything inside. I did see the rather burly gentleman officer that was right there with me, leading the questioning. Ady translated. Although I wasn’t so sure of her translation capabilities because earlier in the day we had gone to KFC and she had ordered me a chicken neck.

Luckily, she was very smiley and cute, which probably did not hurt. She seemed very positive and happily began translating for me. The senior policeman seemed to enjoy her bubbly nature.

He was holding the quadcopter and turning it around, examining the camera, the blades, the everything. He was a curious cat. He asked many questions while a female officer held something that looked like an old CB radio but actually had a camera and was recording me. So I’m somewhere in some Chinese video database, making some amazing arguments.

I basically explained that I was a photographer, and I like getting unique angles. I simply like taking photos and making Beijing look beautiful. I noticed they liked to hear this and were a bit surprised. I saw an opening.

I whipped out my Samsung Nexus Android (S4) phone. I pulled open my photo portfolio and asked Ady to translate. I started sliding through the photos, then I handed the phone to the alpha male. He started swiping and asking questions. She translated and I answered. Oh, that is in Japan. That one is in New Zealand, my home! That one is in Indonesia. This one is in Death Valley where the rocks move on their own! Very mysterious! By now, the guy was smiling and inviting the other officers over to see. They were all crowding around, smiling and laughing, pointing. Now Ady was laughing and having fun and explaining. I was telling stories about the photos… etc etc. It was a suddenly a fun party in jail!

Okay, so this little photo party went on for about ten more minutes… this was an exciting day for them! I think they saw that I was an artist and I really had no interest in taking photos of sensitive things. Those of you that have been coming to the blog for the past 8 years also know this… but, well, these guys were not regular readers so I had to fast-track them! In fact, the alpha male there asked for my blog website here so he could come see new photos. He’s probably reading this now. Hello Nice Chinese Military Police Man! I forgot your name, but thanks for not doing bad stuff to me and stuff.

After the little photo partay, he gave me back the quadcopter and said, “Okay, here you go, but please don’t fly it inside the first or second ring of the city.” I said, okay, cool. And then we made our hasty egress.

Apparently, the news kind of spread around to another group with which I was working in Beijing. They showed up at my hotel the next morning to confiscate the quadcopter, obviously not trusting me not to fly it any more. They agreed to bring it to the airport before I left Beijing. I doubted I would ever see the thing again, but, sure enough, they showed up! I threw the sweet beast in my bag then jumped on my flight back home to New Zealand. Posted by pratanacoffeetalk at 7:31 AM