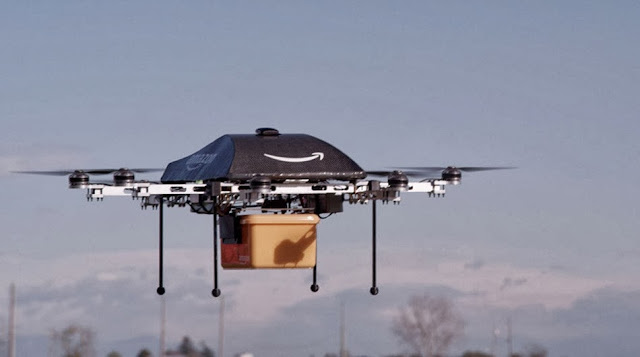 Amazon founder and CEO Jeff Bezos is known for making big bets in the world of innovation, and on Sunday night on 60 Minutes he revealed what might be one of his biggest: product delivery by flying robot drones.

The service is called Amazon Prime Air and it's slated for rollout sometime in 2015, depending on FAA approval.

A video of how the service will work has already been posted to YouTube, showing the process of the package being taken from the warehouse floor and on to the front steps of the customer’s home. The idea is to have the drone deliver orders roughly 30 minutes after the customer hits the “buy” button on Amazon.com.

Bezos was so excited about the news that he kept the details under wraps until just before the interview with the network began. According to the producers of 60 Minutes, before the unveiling, Bezos said, “If you can guess what it is, then... I will give you half my fortune and send you to Vegas with it.”

Reacting to the unveiling of the Amazon-branded drone, Bezos interviewer Charlie Rose said, “I had no idea what its purpose was at first glance… They actually look like something out of a Philip K. Dick novel.”
---------------------
http://mashable.com/2013/12/01/amazon-unveils-flying-robot-delivery-drones/
Posted by pratanacoffeetalk at 7:34 AM